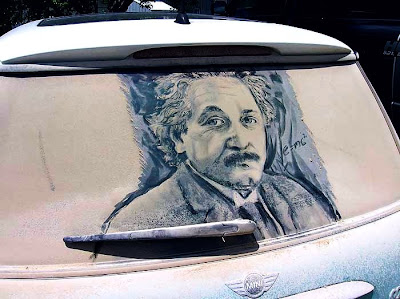 Like the popular and successful Energizer Bunny the flow of dollars continues for marketed Einstein goodies...iconography has its rewards especially for whomever holds the strings for the Einstein merchandise.

Symmetry
Just in time for Halloween, Forbes has released its annual list of top-earning dead celebrities. There in fourth place–behind Elvis Presley, cartoonist Charles Schulz, and actor Heath Ledger–is Albert Einstein, whose frowsy-haired image earned an estimated $18 million in royalties this year. In 2006, Symmetry reported that Einstein was in third place.

Einstein–aguably the most widely recognized and most beloved scientist of modern times–is actually a staple of the list. (The UK's Guardian news blog playfully referrs to "Albert Einstein's Theory of Royalty Longevity.") He earned more this year than each of Marilyn Monroe, Dr. Seuss, Paul Newman, and John Lennon.

None of which should surprise readers of Symmetry, who in the February 2005 issue found this ode to the great man's pervasive presence:

His mug's on mugs,
Bears wear his hair;
Albert turns up everywhere.

Tots and geezers recognize him;
Every market sector buys him.
The world, it seems, will never weary
Of him and his relativity theory.

Year after year, folks take a likin'
To Einstein as a cultural icon.
Font of a vast commercial venture, he
Made Time magazine's "Man of the Century."

Who'd have thought a patent clerk
Would rise above that line of work
To symbolize for humankind
The greatness of the human mind?

That hair, that tongue, that life, that brain-
Remind us of all we might attain.
Would Albert E. have found it rich
To have become the king of kitsch?


Einstein iconography--five papers
Posted by Mercury at 6:00 AM