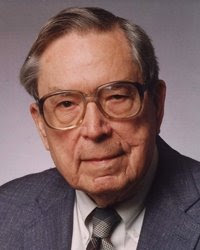 He developed the mathematical framework to understand quake vibrations, leading to the implementation of more rigorous building standards nationwide.

Los Angeles Times
George W. Housner, who pioneered the modern field of earthquake engineering, developing the most complete mathematical system to analyze the effects of ground shaking on structures, has died. He was 97.

Housner, the Braun professor emeritus of engineering at Caltech, died of natural causes Monday at a Pasadena rest home.

His interest in earthquake engineering was spurred by the March 10, 1933, earthquake in Long Beach, which was later estimated at magnitude 6.3. Brick buildings with unreinforced masonry walls, including many school buildings, failed catastrophically. Although 115 people were killed, the number of deaths would have been even higher if the quake, which hit at 5:55 p.m., had struck during school hours.

According to Tom Heaton, professor of engineering seismology at Caltech and a former colleague of Housner's, the field of earthquake engineering hardly existed at the time.

"Nothing was mentioned in engineering books regarding designing to resist earthquakes," Housner told The Times in a 1999 interview.

At the most, Heaton said, engineers considered only how a building would fare in a quake by calculating the force of the pushing on it. It took Housner to realize that an earthquake "is not static" but sets off vibrations throughout the entire structure that could bring it down. Housner developed the mathematical framework to understand those vibrations, which led to the implementation of more rigorous building standards nationwide, Heaton said.

To many in the field today, Housner is known as the father of earthquake engineering, a vigorous subdiscipline of civil engineering.

"George was a man of great intellect, which he used diligently to reduce the impact of earthquakes on our society," Heaton said. "He was one of those people who changed our world."

John Hall, professor of civil engineering at Caltech, said Housner ranks with the greatest minds in engineering history. "He could look at a problem no one had ever thought about before and come up with a way to apply basic principles to find a practical solution."

Born Dec. 9, 1910, in Saginaw, Mich., Housner earned a bachelor's degree in structural engineering at the University of Michigan.

Arriving at Caltech only months after the Long Beach quake, Housner obtained his master's and doctorate there, studying under Romeo Martel, who had done some of the earliest work in trying to understand how earthquakes affected buildings.

After graduating from Caltech, Housner went to work for the Army Corps of Engineers, then advised the Army Air Forces during World War II. His work helped bomber pilots improve their success in attacking bridges.

He also devised a plan to counter the barrage balloons that Axis armies sent aloft over Europe's vulnerable oil fields to interfere with enemy aircraft. Bomber pilots were afraid to attack the oil fields for fear the wires attached to the balloons would slice through their wings. According to Hall, Housner's calculations that the wires might cut into the wings but would not slice all the way through, gave the Army Air Forces the confidence to make the attacks.

Examination of planes returning from bombing runs proved Housner correct. The wings were grooved, but intact.

In 1945, Housner was given the Distinguished Civilian Service Award by the U.S. War Department in recognition of his contributions to the war effort.

After the war, Housner returned to Caltech as an assistant professor of applied mechanics. He later became the Braun professor before retiring in 1981. In 2006, he was named a Distinguished Alumnus, the highest honor the institute can bestow on graduates.

Housner's interest in seismic engineering continued after the war; he chaired a National Academies of Sciences committee looking into the damage from the 1964 Alaska earthquake.

He also was instrumental in the design of California's statewide water storage and transportation system. His earthquake engineering techniques were used to strengthen dozens of dams and aqueducts built throughout California, a system that ranks high among the most ambitious engineering efforts in history.

After the 1989 Loma Prieta quake in Northern California, Gov. George Deukmejian asked Housner to chair the board investigating the collapse of freeways and bridges.

Housner was elected to the National Academy of Sciences in 1972 and became a founding member of the Earthquake Engineering Research Institute. A medal in Housner's name is awarded each year by the organization.

He also was instrumental in the formation of the International Assn. for Earthquake Engineering, as well as Caltech's Earthquake Research Affiliates.

According to Heaton, even after his retirement, Housner continued to show up each day at his Caltech office. Heaton recalled a time in the late 1990s when he was about to give a lecture on a particularly thorny topic and was having trouble mastering it.

"George was walking by my office," Heaton said, "so I asked his advice."

"It's been a long time since I thought about that," Housner said, and walked off.

"Five minutes later, he came back, picked up the chalk and wrote out the whole answer," Heaton said. "I thought, 'Wow.' He was 88 at the time."

Housner never married. He will be buried at Mountain View Cemetery in Altadena.

Interview in 1984 with George W. Housner, Carl F. Braun Professor of Engineering emeritus. BS, University of Michigan in civil engineering, 1933. MS Caltech, 1934. Interest in earthquake engineering after 1933 Long Beach earthquake; 1934-39, designed schools, bridges, and dams in Los Angeles; returned to Caltech for PhD (1941) with R. R. Martel. Worked for Corps of Engineers in Los Angeles, protecting aircraft industry from possible wartime attack. Adviser to the air force in North Africa and Italy during the war. Joined Caltech faculty 1945 as asst. prof. of applied mechanics; buildup of Engineering and Applied Science Division under chairman Fred Lindvall. Comments on differences between seismologists and earthquake engineers. Recalls origins of earthquake engineering at Caltech under Martel. Chairs engineering committee on 1964 Alaska quake. With Paul Jennings, consults on earthquake design for buildings in downtown Los Angeles. Founding of Earthquake Engineering Research Institute [EERI]. Comments on liquefaction in 1964 Niigata earthquake. Recalls Theodor von Kármán’s part in designing pumps for Colorado River Aqueduct. Recalls his own involvement in Feather River Project in 1950s as president of EERI, and Ralph Nader’s misrepresentation of its earthquake safety. Comments on engineering improvements in aftermath of 1971 San Fernando earthquake. Visits China in 1978 as member of delegation on earthquake engineering. Comments on superiority of Japanese earthquake preparedness. Founding of International Association for Earthquake Engineering and Caltech Earthquake Research Affiliates. Establishment with NSF funding of a Committee on Natural Hazards, including wind damage. Sen. Alan Cranston’s part in getting NSF money in 1974 for earthquake research. Comments on his work at Palomar Observatory and Union Bank Building. Comments on demolition of Caltech’s Throop Hall following San Fernando quake, on future of engineering education, and on his stint as chairman of the faculty. Comments on Ed Simmons, inventor of a strain gauge, Simmons’s legal battle with Caltech, and Caltech’s patent policy.

This is a new volume in the ASCE series "Engineering Classics", which presents selected papers of lasting importance by eminent engineers who have made outstanding contributions to their field. Sponsored by the Structural Division of the ASCE, this volume collects a number of key papers on earthquake engineering by George W. Housner, who more than any other person has been responsible for the remarkable development of this subject during the past fifty years. Included here are the basic research papers which form the scientific background for modern earthquake design. They discuss such topics as: the characteristics of strong earthquake ground motion; the response of structures to earthquakes; the development of response spectrum techniques; and, the formulation of design spectrum. Besides presenting his fundamental research papers, other papers are also included on such subjects as: dynamic tests of structures, seismic zoning problems, response of fluid systems to earthquake excitation, and special problems of critical structures such as dams and nuclear power plants. The volume thus not only presents much material of historical interest, but it is virtually a textbook on modern earthquake engineering.
Posted by Mercury at 5:29 AM