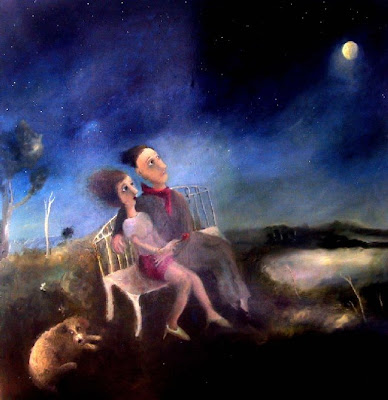 Oil and Acrylic on Canvas

'Twas noontide of summer,
And mid-time of night;
And stars, in their orbits,
Shone pale, thro' the light
Of the brighter, cold moon,
'Mid planets her slaves,
Herself in the Heavens,
Her beam on the waves.
I gazed awhile
On her cold smile;
Too cold- too cold for me-
There pass'd, as a shroud,
A fleecy cloud,
And I turned away to thee,
Proud Evening Star,
In thy glory afar,
And dearer thy beam shall be;
For joy to my heart
Is the proud part
Thou bearest in Heaven at night,
And more I admire
Thy distant fire,
Than that colder, lowly light.
Okay, the objective is commercial, but there is therapy in observing the night sky. I always had trouble connecting the dots [stars] to visualize the constellations but I had no trouble lying on the ground just gazing at the speckled universe.
"Scotland sells star therapy to stressed out city dwellers"

The Observer
Scotland's landscape is among the most spectacular on Earth but now there are plans to promote not just the Highlands, but the sky above them as well.

Details of a series of 'dark-sky parks' to endorse Scotland as the number one destination for stargazers are to be unveiled later this month. Scotland's night skies are considered to be among the best in the world and both science and tourism experts believe rural areas could benefit from the plan to introduce stressed-out city dwellers to stargazing.

'The night sky could be as important for tourism as the landscape,' said a spokesman for Visit Scotland, the national tourism body, which is backing the initiative to rebrand Scotland as the first country in the world to establish rural areas as 'dark-sky discovery sites'.

'There are vast areas with dark skies which make Scotland a must-visit destination, offering a unique experience,' the spokesman added.

Next year is the International Year of Astronomy and according to Steve Owens, UK co-ordinator of the global celebrations to mark it, there are sound economical reasons why the Scottish tourism industry should support the dark-skies initiative.

'I've studied the stars from remote areas all over the world ... Nowhere is the atmosphere so clear as in Scotland because the rain clears the skies and so, on a good night, the view is spectacular,' Owens said. 'Over half of the world's population live in urban areas and we want to get those people to take time out and look at the night sky. It's very early days to determine exactly the kind of market for dark-sky tourism but the UK has the highest percentage of amateur astronomers in Europe and there are thousands of people who subscribe to astronomy magazines and join societies. Places in the Western Isles and Highlands do well attracting tourists in the summer and hopefully the dark-sky parks will help them attract more visitors throughout the winter.'

Although Owens admitted Scotland's often cloudy skies could present a problem for stargazers he claimed anyone spending a long weekend or more in a dark-sky area would have a good chance of seeing something spectacular.

The opportunity to see the night sky brilliantly illuminated by stars, or the Milky Way in all its glory with the naked eye, may be seriously limited in most of the UK but Scotland's sparsely lit island communities have an advantage.

'Light pollution destroys more than a chance to see the night sky, it transforms the atmosphere of a place,' said Ian Stevens, proprietor of the award-winning Tobermory Hotel on Mull, who moved to the island eight years ago from west Yorkshire. 'On a clear night, especially in winter, you can walk a short distance out of the hotel and see the Milky Way. Guests are often amazed by the night sky, especially those who come from city areas where they have never before experienced anything like it. They find it exciting and even romantic.'

'Most people have lived with light pollution all their lives so don't know what they've been missing; very few have seen a truly dark sky with only the stars to illuminate it.'

At the right time of year the northern lights, or aurora borealis, can be viewed from Mull, providing a spectacular natural light show.

'Scotland's weather can be a bit of a gamble for stargazing, but for amateurs it is still probably one of the best places in Europe for dark skies,' said Professor John Brown, Regius professor of astronomy at Glasgow university and Astronomer Royal for Scotland. 'If we play it right, everybody can win. We should be able to double or treble the amount of visitors to an area.'

According to Dan Hillier of the Royal Observatory in Edinburgh, more than 30 organisations have so far been involved in the creation of the Dark Sky Scotland project, including the Forestry Commission.