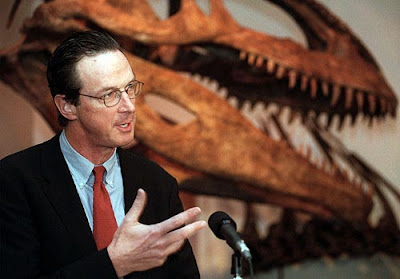 What a tragedy to lose a master craftsman for the popularization of science and damn good adventures...now to join the sphere with the likes of Doyle, Verne, and Wells.
"Michael Crichton: A Master Storyteller of Technology's Promise and Peril"

Time
Michael Crichton, who died from cancer Tuesday in Los Angeles at the age of 66, was an outsized figure in almost every possible way, beginning with his height, which is usually listed at 6 ft. 9 in. He was married five times, and divorced four. But it's his polymathic professional achievements that make him an almost implausibly imposing figure. Crichton trained as a doctor at Harvard Medical School. He directed Yul Brenner in Westworld and Sean Connery in The Great Train Robbery. He created ER, one of the most successful TV dramas of all time, and co-wrote the screenplay for the 90s tornado-chasing thriller Twister.

But it's as a novelist that Crichton was best known. He wrote two dozen thrillers, including The Andromeda Strain, Congo, Sphere and Jurassic Park, that collectively sold over 150 million copies. (A new one, its title and subject matter still unannounced, is slated for publication in December.) Crichton was never a literary stylist, but his skills as a storyteller were enormous. His plots have a crystalline perfection that has been much-copied, by The Da Vinci Code's Dan Brown among many others, and his sense of pacing and his ability to weave diverse plot strands into an elegant braided whole are virtually unmatched. His oeuvre is among the most-filmed of any author in history.

Crichton also had an amazing knack for wringing emotional drama from hard science. His novels plunge fearlessly into arcane scientific realms where lesser writers would fear to tread — nanotechnology in Prey, genetics in Next. He courted controversy ardently: he wrote about sexual harassment in Disclosure and the expanding Japanese economic hegemony in Rising Sun (back in 1992 when that was an edgy topic). Most infamously he attacked the theory of global warming in State of Fear.

Crichton's authorial persona paradoxically combined a true nerd's fascination with science and technology — he even dabbled in computer programming — with an extreme cautiousness about their uses. Time and again his novels feature overeager scientific researchers, greedy for cash and knowledge, who evade regulation and supervision to open one Pandora's Box after another, always with fatal consequences. In his world-view the raw chaos and complexity of nature always lead to unforeseen consequences. "Science is a kind of glorified tailoring enterprise," Crichton wrote in Travels, "a method for taking measurements that describe something — reality — that may not be understood at all."

Crichton is best known, of course, for Jurassic Park, his novel about a scientist who clones dinosaurs from their fossilized DNA, with disastrous results. It may be the most effective showcase for Crichton's gifts as a novelist, but even setting that aside, its predictive power remains astonishing to this day. Just this week, Japanese scientists announced that they had successfully cloned mice from tissue that was frozen for 16 years. Can the resurrection of the woolly mammoth be far off? Crichton probably wouldn't have approved, but it's a shame nonetheless that he didn't live to see it.

The New York Times
Michael Crichton, who died on Tuesday at the age of 66, was like a character in a Michael Crichton novel. He was unusually tall (6 feet 7 inches), strikingly handsome and encyclopedically well informed about everything from dinosaurs to medieval banquet halls to nanotechnology. As a writer he was a kind of cyborg, tirelessly turning out novels that were intricately engineered entertainment systems. No one — except possibly Mr. Crichton himself — ever confused them with great literature, but very few readers who started a Crichton novel ever put it down.

Most of his books relied on a simple formula. Like a scientist in a lab, Mr. Crichton (who had been a medical doctor before turning to fiction) would introduce some worrisome new specter into his fictional universe and then watch it run amok. Sometimes the menace was biological, like the space-borne plague in an early novel, "The Andromeda Strain," or the genetically engineered dinosaurs in "Jurassic Park" and its sequel, "The Lost World." And sometimes the problem was human beings, like the Japanese businessmen in "Rising Sun" intent on taking over the United States economy, or the rapacious female executive in "Disclosure." The implicit prophecies embedded in those two books — a world run by sinister, unreadable Asians or castrating female honchos — proved to be wide of the mark, which was perhaps slightly embarrassing to Mr. Crichton, but that did not deter him from speculating, in his 2004 novel, "State of Fear," that global warming might be a hoax.

All the Crichton books depend to a certain extent on a little frisson of fear and suspense: that’s what kept you turning the pages. But a deeper source of their appeal was the author's extravagant care in working out the clockwork mechanics of his experiments — the DNA replication in "Jurassic Park," the time travel in "Timeline," the submarine technology in "Sphere." The novels have embedded in them little lectures or mini-seminars on, say, the Bernoulli principle, voice-recognition software or medieval jousting etiquette. Several also came with extensive scientific bibliographies, as if the author, having learned all this fascinating stuff, couldn't help sharing it with his reader. Mr. Crichton, who also wrote for movies and television, was like a perpetually astonished graduate student who was more at home in the lab and the library than in social situations. His gizmos, as some critics never tired of pointing out, were often more subtle and more interesting than his characters.

The best of the Crichton novels have about them a boys' adventure quality. They owe something to the Saturday-afternoon movie serials that Mr. Crichton watched as a boy and to the adventure novels of Arthur Conan Doyle (from whom Mr. Crichton borrowed the title "The Lost World" and whose example showed that a novel could never have too many dinosaurs). These books thrive on yarn spinning, but they also take immense delight in the inner workings of things (as opposed to people, women especially), and they make the world — or the made-up world, anyway — seem boundlessly interesting. Readers come away entertained and also with the belief, not entirely illusory, that they have actually learned something.

Like most genre fiction, the Crichton novels are windup toys of a sort, and in memory it’s hard sometimes to keep them all straight. We recall them by their themes and issues — the plague book, the gorilla story, the train-robbery one, the airplane thriller — and not for their characters or their fine writing. But they are nevertheless toys that require a fair amount of craftsmanship. Despite their way of latching on excitedly to the latest new thing, they often gleam with old-fashioned polish.


Ethics: Robots, androids, and cyborgs
Posted by Mercury at 3:39 PM