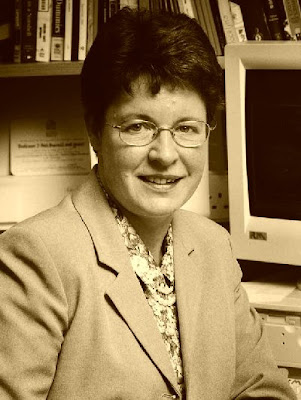 "Jocelyn Bell Burnell, a woman on a mission to reveal the friendly face of physics"

Physicists love to talk about "paradigm shifts". Their discipline is littered with them: dramatic changes in thinking that fundamentally altered the way scientists look at the world.

Telegraph.co.uk
For Professor Jocelyn Bell Burnell, the new head of the Institute of Physics, we are on the verge of not one but two such paradigm shifts.

The first will completely change our view of the universe. The second will alter the way we see physicists themselves.

The former professor of physics at the Open University, and current visiting professor of astrophysics at Oxford, tackles the more familiar revolution first: our effort to unlock the mysteries of creation.

"We still don't know what about 96 per cent of the universe is made of," she says. "It is dark matter and dark energy, but we have no idea what it is. All we know is that it is different from the matter we have been studying for hundreds of years."

But it is something else she is keenest to talk about: as the first female president of the Institute of Physics in its 134-year history, the 65-year-old is attempting to rid physics of its stuffy, male-dominated reputation.

She faces a difficult task: just 20 per cent of undergraduates studying physics at British universities, and less than four per cent of the 4,256 fellows of her own institute are female.

"There are some countries where there is not an issue with women in physics," Prof Bell Burnell says. "Malaysia, for example, has physics departments where 60 per cent of undergraduates are female, and France and Italy are strong, too. It is not about ability, but more about what the culture says is appropriate."

"Also, historically, science has not been easily combined with a family life. That is beginning to change now, as some younger men, whose wives had careers and who had to go home to pick up the children from school themselves, are now becoming heads of department."

"These are not easy changes to make, but I would hope that simply by being visible as the president [of the institute] we can go some way towards that."

In just over a month, she has received hundreds of emails from female students seeking advice. And as a role model, Prof Bell Burnell fits the part.

During her time studying for a PhD in radio astronomy at Cambridge, she helped discover the first pulsar – a highly magnetised, and picturesque, neutron star.

Her work with Anthony Hewish, her supervisor, kick-started an entirely new area of astronomy, and won Hewish a Nobel prize. Controversially, Prof Bell Burnell was not recognised.

As a practising Quaker, she would appear to be an unlikely scientist. But she dismisses the distinctions that other scientists, such as Richard Dawkins, have drawn between science and religion. "I find the two reasonably compatible," she says.

"In Quakerism, your understanding of God is revised in light of your own experience, while in research science you revise your model in light of data from experiments."

She is also keen to address issues of public trust. "People are suspicious of science," she says. "They see it as being responsible for problems like the degradation of our climate. There is also a strand in society that says physics is terribly hard."

"Unfortunately, there have been times when scientists have said. 'It's far too complicated, you won't understand', which is a bit like saying, 'I'm brilliant, aren't I?'".

"But a number of the themes of physics have tremendous attraction for the public. There is an element of fascination about what quantum physics is saying, or what the Large Hadron Collider is going to discover."

" It is probably far too ambitious, but I would like this country to have a public that is comfortable with, rather than suspicious of, physics."

Prof Bell Burnell's appointment comes during one of the most dismal periods for physics in recent times: undergraduate numbers are dropping, uptake of the subject in schools is critically low and the Science and Technology Facilities Council is cutting back funding.

But she believes this is all about to change. "I suspect that moderately soon, there will be a lot more clarity on what dark matter is, and that is going to open up an enormous area of physics."

"Also, in addition to observing X-rays, infrared and radio, there is the behaviour of space and time itself, which I think we are close to a direct detection of. It will give us a whole new way of looking at the universe."
Posted by Mercury at 6:30 PM

hey jocelyne its magen im doing a project on you right now and i was looking up websites and i happend to click on this one and i saw no comments so i said what the heck im gonna leave this woman a comment just to say hey so...hey im your biggest fan! i love all your discoveries thank the lord for scientist likeyou! ily ♥ --Magen