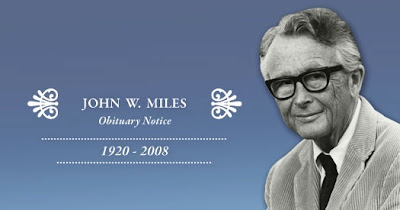 John W. Miles, renowned scientist and research professor emeritus of applied mechanics and geophysics at Scripps Institution of Oceanography, UC, San Diego, died Oct. 20, 2008, in Santa Barbara, Calif., following a stroke. He was 87 years old. Miles had been at Scripps since 1964 as a researcher and professor in the Cecil H. and Ida M. Green Institute of Geophysics and Planetary Physics (IGPP) and also served as vice chancellor for academic affairs at UC San Diego from 1980 to 1983.

Miles was well regarded for his pioneering work in theoretical fluid mechanics and in 1957 proposed a wind-wave growth model, a theory he continued to refine until late in his career. His theoretical model is considered one of the cornerstones for the current generation of numerical wave prediction models, and a major contribution to the field of ocean weather forecasting and wave dynamics. In 2003, researchers at Johns Hopkins University and UC Irvine provided the first experimental measurements supporting important aspects of Miles' theory.

Miles devoted the first 20 years of his research to electrical and aeronautical engineering. When he joined Scripps, he turned his mathematical abilities to geophysical fluid dynamics and made numerous contributions to all aspects of fluid dynamics, including supersonic flow, ocean tides, the stability of currents and water waves and their nonlinear interactions, along with extensive work in the application of mathematical methodology.

"John was a very generous colleague with a great love for research and an immense appetite for work", said Rick Salmon, Scripps professor of oceanography and colleague of Miles.

Miles was born in Cincinnati, Ohio, in 1920 and received his B.S. in 1942, M.S. in 1943, and A.E. and Ph.D. in 1944, all from the California Institute of Technology. During World War II, he worked at the Massachusetts Institute of Technology's Radiation Laboratory and for Lockheed Aircraft Corporation, followed by an appointment as professor of engineering and geophysics at UCLA from 1945 to 1961.

In addition to his vice chancellorship at UC San Diego, he also served as chairman of the Academic Senate from 1977 to 1978 and chairman of the Applied Mechanics and Engineering Sciences Department from 1968 to 1972.

Although he explored a world of theoretical chaos, his life was the essence of order. He worked in his office six days a week, nearly 12 hours a day, on a strict schedule for every activity from student conferences to daily bicycle rides. Miles was an avid swimmer - in the ocean in his younger years, and later in at the UC San Diego Canyonview Pool where he was often spotted riding to on his bicycle. Miles also enjoyed hiking and over the course of his annual summer vacations completed the Pacific Crest Trail, which spans the entire U.S. west coast from the Mexican to Canadian borders,

Miles retired from Scripps in the mid-1980s and soon after returned to active duty to supervise graduate student research. Whether officially retired or not, he maintained a rigorous research and publication schedule throughout his academic career, even during times of heavy administrative responsibilities.

"John was known for his generous support of young people who worked with him, a number of whom have gone on to very successful careers in academia and research," said Ken Melville, professor of oceanography at Scripps and former postdoctoral researcher with Miles. "The example John set would influence you for the rest of your career."

In 1990 he was feted with an international symposium on fluid mechanics at Scripps, in recognition of his contributions to science and academia. He has received several prestigious awards, including the Timoshenko Medal of the American Society of Mechanical Engineers in 1982, and was designated the Otto Laporte Lecturer by the American Physical Society in 1983. He was elected a member of the National Academy of Sciences in 1979.

Miles' research productivity was legendary, with more than 400 publications over his working 60-year career. He served as associate editor of the Journal of Fluid Mechanics and editor/coeditor of several other scientific journals, covering U.S. and foreign research in fluid mechanics, applied mechanics and mathematical analyses.

He was a longtime resident of La Jolla, Calif., and is survived by three daughters, Patsy Fiske of Santa Barbara, Calif., Ann Leslie Albanese of Solvang, Calif. and Diana Jose of San Diego, Calif. At his request there will be no memorial services. His ashes will be scattered at sea.

[Thanks to stringer Tim.]
Posted by Mercury at 3:45 AM