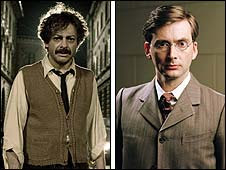 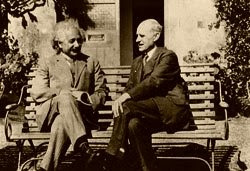 The real Albert Einstein and Sir Arthur Eddington
The BBC will air this comming Saturday a docudrama, Einstein and Eddington, on the interactive lives of Albert Einstein and Sir Arthur Eddington. This means that PBS will probably air it sometime next year--maybe...and the following review is rather glowing. It is significant that this docudrama garnered high rank for usually the docudrams are somewhat sappy and lack depth of character. I well remember the terrible one done on Einstein. The producers wish to emphasize that the focus will be on the characters and not the science. It will be interesting to see the development of the role of Eddington played by the current Doctor of Dr. Who--David Tennant.

physicsworld.com
Albert Einstein is certainly the most famous scientist of the 20th century, and probably one of the most important in all of human history. So great is Einstein’s reputation that it makes that of Arthur Stanley Eddington — a fine observational astronomer and a gifted popularizer of science — seem like footnote fodder. Yet without Eddington’s 1919 eclipse expedition, which provided early proof of general relativity, Einstein’s discoveries might have languished for years before becoming known outside the German-speaking scientific community, let alone amongst the general public.

The connections between Einstein and Eddington are the subject of a new film from the BBC, starring David Tennant of Doctor Who fame as a troubled, repressed Eddington and Andy Serkis (best known as the model for Gollum in the Lord of the Rings films) as a flawed but likeable Einstein. Einstein and Eddington airs on BBC2 on 22 November at 21:10 and is well worth a watch — if mostly for the human drama, rather than the scientific content.

For Einstein and Eddington is about physicists, not physics. True, there is a somewhat jarring attempt to explain special relativity early in the film using Einstein, his sons, and a boat, and a few passing references to Einstein inventing new symbols — much to the distress of his neglected first wife (and fellow physicist) Mileva, played by Lucy Cohu. But although the obligatory sheet-and-heavy-object explanation of general relativity (here starring Eddington’s tablecloth, a large loaf of bread, and an orbiting apple) is nicely done, the film’s main focus is the parallel lives of its protagonists during the First World War.

Both Einstein and Eddington were pacifists, and the latter was a devout Quaker. This caused both of them considerable difficulties, and their respective struggles to rise above the war’s bitterness make for some of the film’s most effective scenes. At the outset of the war, Einstein refuses to sign a letter aligning German science with the German army, despite pressure from Max Planck (played by Donald Sumpter). Eddington’s decision to correspond (surreptitiously) with Einstein despite officially-sanctioned xenophobia likewise took serious guts. Both Einstein and Eddington narrowly escaped imprisonment late in the war, although the film glosses over this bit of history.

It is difficult to fit a world war, a scientific revolution, and the complex personal lives of two protagonists into an hour and a half. There are moments when Einstein and Eddington struggles. Several minor characters are rather too obviously going to end up killed in the war, and one could, perhaps, wish for a more rounded depiction of Eddington’s establishment nemesis, Sir Oliver Lodge (Jim Broadbent).

On the other hand, the film does a fine job of depicting the ethical struggles of scientists in wartime. The use of poison gas — invented by Einstein’s Berlin colleague Fritz Haber — is a recurring theme, for example, and it is interesting to see this topic explored in the context of the First World War rather than the second.

Overall, Einstein and Eddington makes compelling drama. The parallels between Einstein overthrowing Newton and the war overthrowing pretty much everything else are finely drawn, and capable performances from Tennant, Serkis and several supporting actors should increase the film’s appeal to non-scientists. The result is a rare popularisation that brings out the human side of physicists while poking gentle fun at the popular image of Einstein as a wild-haired eccentric.