The price paid for a precious mineral 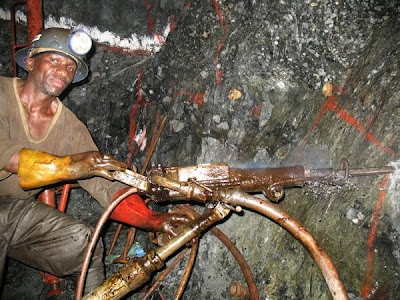 Decades of mining and now safety is an issue...not enough and too late. But that is Africa. Gold and other precious minerals are scattered throughout the world. Will the same concern be manifested at other mining and smelting sites? I doubt it.

"South Africa Is Aiming to Ease Dangers of Digging for Gold"

The New York Times
The easy pickings are long gone. The remaining gold is buried in slender seams two and three miles down, tiny but precious particles flecked within the subterranean reefs of unyielding rock.

Each day, the miners crowd into the open-cage elevators, descending into the earth at a depth greater than that of the Grand Canyon, then boarding the small trains that carry them through the lattice of tunnels. It can take 90 minutes just to reach the high-powered drills at the next pocket of unclaimed ore.

That far down, heat floats off the rock at about 110 degrees, a temperature made tolerable only by refrigerated air blown through the passageways. The drilling is done in narrow, low-roofed clefts that have been gouged out of the gold-bearing reef. Explosives are then wedged into each hole. Entombment is the biggest danger under the weight of falling rock.

The value of the extracted gold is measured in currency, but of course there is a human toll as well — fatalities that, while declining, continue to be appalling enough that Parliament has been considering a measure this week that threatens company executives with prison time for deaths within their mines.

A 1995 national commission estimated that 69,000 mineworkers were killed in South Africa between 1900 and 1993, with 25 times that many seriously injured, the vast majority digging for gold. That does not count the untold numbers felled by lung diseases owing to the contaminated air — or those rendered deaf by the bone-jolting noise.

The rate of mining fatalities compares "unfavorably with most other countries in the world," the commission concluded. Since then, safety measures have reduced the annual number of deaths to about 220 from an average of 742. This is post-apartheid South Africa, and the welfare of miners — nearly all of them black — is a matter of more scrupulous concern.

"We've had pockets of amazing improvements, but people continue to work in conditions that are patently unsafe," said Prof. Mavis Hermanus, the director of a center on mining at the University of Witswatersrand.

The new legislation would subject company executives to prison for up to five years or fines of up to $300,000 — making administrators sitting in offices criminally culpable for accidents in the dank underground.

"We've campaigned for these penalties for a long time," said Lesiba Seshoka, a spokesman for the National Union of Mineworkers, which represents a majority of the nation's 465,000 miners. "The companies pay lip service to safety and go on being negligent. They blast before putting up the proper supports. Imagine what remains of a man after the ceiling of rock has fallen on him. Sometimes you have nothing left to put in a grave."

But most of the major mining companies say they have already become far more conscientious about safety. Randel Rademann, general manager at Mponeng, one of the biggest mines, said he opposed the legislation. "We all need to work together on safety and not against each other with threats," he said. "If they make laws too onerous, skilled people will leave the industry."

Mponeng, 30 miles southeast of here, is owned by the international giant AngloGold Ashanti. At 11,355 feet, the mine is the second deepest in the world, and the excavation there will soon put it in first place, Mr. Rademann said. Depth matters. The danger of a rock fall, a cave-in caused by unsecured weight, or a rock burst, a violent fracture caused by built-up stress, gets greater as the mining goes deeper.

But only one man has died at Mponeng this year, trapped between two cars of a train. A sign at the mine’s entrance proclaims, "Health and safety is our first value." Beside it is a running count of fatality-free worker shifts. Managers nimbly insert that catchphrase — safety is our first value — into conversation. Even miners, their faces lacquered with sweat, recite the words like corporate liturgy.

"Safety is the big value," said Hendrik Marubane, 25, a driller’s assistant working in one of those narrow clefts. As he moved his head, the light affixed to his hard hat became a dancing beam against the dark rock.

Mr. Marubane was too tall to stand in so low a cavity and moved with a waddle. "I used to be a policeman," he said. "I think this work is safer."

Johannesburg owes its existence to the mines. The city did not so much grow as erupt in the late 19th century beside newly discovered gold fields. Men with pickaxes and pans were never going to reap the wealth below. The geology required international syndicates with enough capital to invade the rock. Johannesburg became a financial hub.

Nevertheless, mining still accounts for nearly 7 percent of the nation's gross domestic product and is a vital source of jobs in a country where unemployment is estimated at nearly 40 percent. Further mechanization of the mines might well reduce the number of accidents, but it would also lower the supply of jobs. Unions oppose it. "We represent people, not machines," Mr. Seshoka of the mineworkers union said flatly. "There are other ways to make the mines safer."

At Mponeng, Mr. Rademann, the general manager, said the company already was doing about as much as it could. He said 96 percent of injuries happened because a worker did something wrong. "It's just like being on the road," where most car accidents are caused by driver negligence, he said.

Lungile Mnini, 47, who works in the mine's canteen, said he could not recall doing anything wrong when the rocks fell on him in 1991. He remembered only a tremor and then other miners scooping him free. Seven men died. He spent three years in a wheelchair. "I'm glad I don't go down there anymore," he said.

The conversation was taking place at a hostel for the miners. A woman named Thuli Mahlalela, a 33-year-old single parent, joined in. "It's nice to work underground," she said. "You get away from the things bothering you above ground."

Six months ago, she got a job helping transport timber through Mponeng's subterranean arteries. The job is O.K., she said, but the money is even better, about 3,000 rand per month, or $300.

"Try being a woman and get a better job," she said.

As for danger, it did not really worry her.