Wooly Mammoth could make a comeback 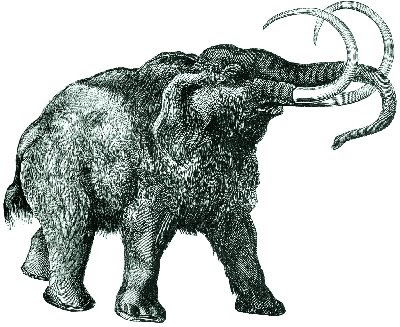 Expensive, may not work, might not be ethically sound.

Into the news, that is. For it has had its genome sequenced, and is the first extinct animal to have done so.

The sequence is a draft — for technical reasons, parts of it are likely to be inaccurate — and it is not yet complete. But that didn't stop joyous speculations about the prospects for the mammoth’s resurrection.

And I have to say, I love this stuff. I adore thinking about the science that would need to be done to bring back an extinct species, be it a mammoth or a glyptodon, a dodo or a Neanderthal. (Glyptodons were boulder-sized mammals related to armadillos, and are a particular favorite of mine. They used to live in South America, and they went extinct at about the same time as the mammoths, around 10,000 years ago.)

The outline of how to stage a resurrection is clear. In essence, it's a matter of cross-species cloning — using an egg from one species to host the genome of the other. The procedure is more or less the same as for regular cloning. First, you make a "blank" egg by removing the egg's nucleus — this contains the egg's genome. You then insert the genome of the animal you want to clone.

In regular cloning, the genome is from the same species as the egg. In cross-species cloning, the genome and egg are from different species. So, for mammoths, you'd put mammoth DNA into a blank elephant egg, and transplant the egg into an elephant surrogate mother. For Neanderthals, you'd put Neanderthal DNA into a blank human egg, and have a human surrogate mother (or, one day, perhaps, an artificial womb). For a bird like a dodo, you'd put dodo DNA into a blank pigeon egg (dodos were essentially big flightless pigeons), and pop the egg into an incubator. Easy peasy.

Or not. In the decade since Dolly the Sheep was cloned, enormous progress has been made on regular cloning. To date, more than 10 different species of mammal have been cloned, including ferrets, rabbits, horses, cows and pigs. Nonetheless, success rates are still extremely low. Even for cows, the animals that have been cloned the most, fewer than 5 percent of embryos transferred to surrogate mothers result in offspring. A recent report on dog clones illustrates the problem: of 358 embryos transplanted into 20 females, two pregnancies became established, and only one puppy was born.

The reasons for the failures are many and various. Sometimes the embryos don't grow. Sometimes the placenta goes wrong. Many clones are stillborn, or born with gross abnormalities. In short, despite the successes, cloning is still far from being reliable or routine.

Given the difficulties of normal cloning, it's surprising that cross-species cloning has been tried, let alone had any successes. But it has. For example, two African wildcat kitten clones have been born from domestic cats, and three gray wolf clones have been born from domestic dogs. Again, though, the failure rates have been high. To get the three wolves, 372 embryos were transferred into surrogate mothers. The wildcats were even worse: 1,552 embryos were transferred, but only two healthy kittens were born (in all, 17 were born, but 7 were born dead and 8 died shortly after birth).

Cloning a mammoth would be even more difficult. For one thing, elephants and mammoths are less closely related to each other than cats and wildcats or dogs and wolves, so the difficulties would likely be greater in any case. And elephants have a 22-month pregnancy — so you'd have to wait a long time to find out whether the experiment had worked.

But there's a far more profound problem, as well. The normal way to get a new genome into a blank egg is to take a single cell from the animal you want to clone, and fuse it with the egg. The nucleus of that single cell then becomes the nucleus of the egg. But with a mammoth, this almost certainly won't work. Because mammoth carcasses have been lying around for 10,000 years or more, their cells aren’t in good shape and their genomes are shattered. Instead of being neatly arranged in chromosomes, as ours are, mammoth genomes are in tiny pieces. So before we could put a mammoth genome into an egg, we would have to build one — something we are nowhere close to being able to do. Woolly mammoths will not be coming soon to a zoo near you.

All the same, research in this direction would surely yield astonishing discoveries. Our efforts to clone have opened up immense vistas of new research questions, and advances in the field have already shed light on fundamental aspects of how an embryo grows. During growth, cells become committed to being one type of tissue or another — heart muscle, say, or skin cells. Through cloning, we are learning how to reverse those commitments, something that may, one day, lead to revolutionary medical treatments. Likewise, learning to build a genome, whether of a mammoth or anything else, will certainly be interesting, and will probably be important in ways that we can't foresee.

And yet. No matter how much I enjoy thinking about the science of resurrection — and I do — I have to admit that the absence of mammoths isn't exactly a pressing problem. What is pressing is the number of species we are currently in danger of losing. It would be a shame if, in 200 years, our descendants were wondering whether to try and resurrect the elephant or the polar bear, the albatross or the mourning dove.

Let's get our act together. Let's prevent that first.

For examples of mammals that have been cloned, see Meissner, A. and Jaenisch, R. 2006. "Mammalian nuclear transfer." Developmental Dynamics 235: 2460-2469. For cloning (in)efficiency in cows, and for a discussion of some of the difficulties, see Oback, B. 2008. "Climbing Mount Efficiency — small steps, not giant leaps towards higher cloning success in farm animals." Reproduction in Domestic Animals 43 (Supplement 2): 407-416. For the particular example I gave of low success rates in dog cloning, see Jang, G. et al. 2008. "A cloned toy poodle produced from somatic cells derived from an aged female dog." Theriogenology 69: 556-563.

Many thanks to Dan Haydon and Jonathan Swire for insights, comments and suggestions.
Posted by Mercury at 5:55 PM