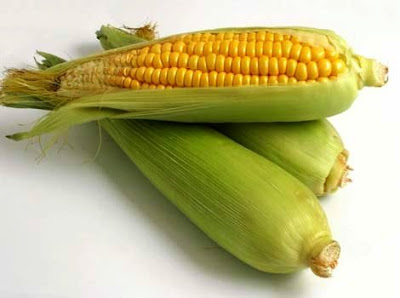 This article from Chemical & Engineering News does make one wonder about the sustainability of having one primary food source in the complex food chain. If the "corn" link is broken as in severe drought or disease, it would have a devastating effect on the food chain. It has already been compromised by the alternate fuel hysteria resulting not in a broken food chain but higher product costs. Has there ever been a successful society that relied so heavily on one product's diversification and has that society collapsed when that one product disappeared or severely compromised?

Chemical & Engineering News
EVERY TIME PATRONS of fast-food restaurants bite into a burger or devour a fistful of fries, they are, in essence, enjoying a heaping serving of corn. According to chemical isotope analysis, the vast majority of beef and chicken served in fast-food eateries is raised on a diet of corn, and corn oil is frequently used to cook fries (Proc. Natl. Acad. Sci. USA 2008, 105, 17855). The findings are the first to scientifically demonstrate corn's fundamental role in the fast-food industry, on which Americans spend more than $100 billion annually.

University of Hawaii researcher A. Hope Jahren undertook the fast-food forensic-like analysis to find out how reliant the industry is on corn. Corn agriculture in the U.S. has been criticized as being environmentally unsustainable, requiring disproportionate amounts of fertilizer and fossil fuels. And although the fundamental role corn plays in the U.S. diet has been the subject of other reports, such as Michael Pollan's book "The Omnivore's Dilemma," these accounts have been based on journalistic investigation rather than scientific study.

"I think society is struggling with the need for dietary information that's not forthcoming," Jahren says. Throughout the course of her study, she notes, she attempted with no success to find out from fast-food corporations how their livestock are fed.

Jahren and graduate student Rebecca A. Kraft analyzed the carbon and nitrogen in nearly 500 servings of burgers, fries, and chicken sandwiches. Carbon in corn has a specific isotopic signature, so when livestock consume a corn-based diet, that signature is left in the animals' tissue. Similarly, the nitrogen-based fertilizer used to grow that corn also leaves a telltale trail in nitrogen's isotopic ratio.

The researchers gathered the fast-food staples over the course of two years from McDonald's, Burger King, and Wendy's restaurants in Los Angeles, San Francisco, Detroit, Denver, Boston, and Baltimore. They found that 100% of the chicken and 93% of the beef had been fed exclusively a corn-based diet. And the nitrogen analyses indicate that the livestock had been dining on heavily fertilized feed.

The carbon signature of the fries indicate that Wendy's uses solely corn oil for frying, although the company claims it may also use canola, soy, or cottonseed oil for this purpose. McDonald's and Burger King fries are cooked with various vegetable oils, according to the results.

"This study reinforces our observations that North America is becoming reliant on a single crop for a food source," says Stephen A. Macko, a University of Virginia researcher who uses isotopes to study the human diet. Macko questions whether Americans' dependence on corn is sustainable or healthy, noting that corn-based agriculture is heavily subsidized and that cattle raised on a corn-based diet tend to be sick.
Posted by Mercury at 3:30 PM