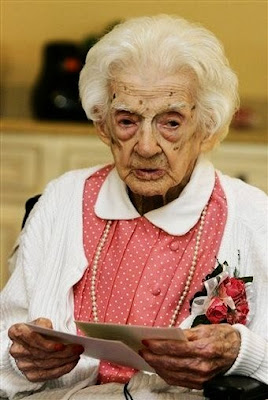 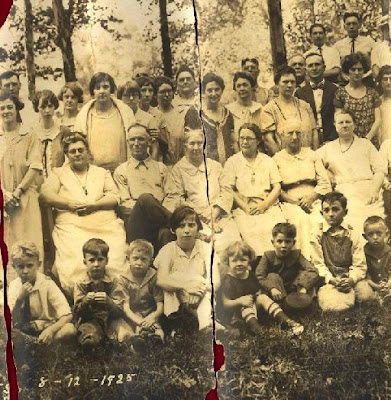 A big greeting going out from Willard Scott: Happy birthday, Edna Parker! A week ago Sunday, Edna Parker of Shelbyville, Indiana, celebrated a very special birthday. She turned 115, cementing her lead in the oldest living person sweepstakes. It's truly a remarkable milestone. Edna was born on April 20, 1893, just a few weeks after Grover Cleveland was inaugurated as president of the United States (for the second time). She has lived in three centuries and was 21 years old when the United States became involved in World War One (what she probably stubbornly still refers to as "the Great War"). Edna’s husband died of a heart attack in 1938 at the age of 45, and she has been a widow for 70 years. In fact, she lived on their family farm until 15 years ago when she finally moved in with her son, who is now deceased.

The world's oldest person [certified by Guinness Book of Records] passed away on Wednesday [November 26th, 2008] at the age of 115 at a nursing home in Shelbyville, Indiana southeast of Indianapolis. Edna was one of those anomalies of life that mystifies explanation. Some wish longevity by manipulation via medication and or physical regimen--Edna did it naturally.

Times Online
A great-great-grandmother who was the world's oldest person has died at the age of 115.

Indiana woman Edna Parker, who assumed the mantle more than a year ago, passed away on Wednesday at a nursing home in Shelbyville. She was 115 years, 220 days old.

Mrs Parker was born April 20, 1893, in central Indiana and had been recognised by Guinness as the world's oldest person since the 2007 death of Japan's Yone Minagawa, who was four months her senior.

Dr Stephen Coles, the UCLA gerontologist who maintains a list of the world's oldest people, said Mrs Parker was the 14th oldest validated super-centenarian in history. Maria de Jesus of Portugal, who was born September 10, 1893, is now the world’s oldest living person, according to the Gerontology Research Group.

Mrs Parker became a widow in 1939 - the year Judy Garland starred in The Wizard of Oz - when her husband, Earl Parker, died of a heart attack. She was 48. She remained alone in their farmhouse until age 100, when she moved into a son’s home and later to the Shelbyville nursing home.

Though she never drank alcohol or smoked and led an active lifestyle, she didn't credit this for her advanced years.

A teacher, her only advice to those who gathered to celebrate when she became the world's oldest person was to get "more education."

Don Parker, 60, said his grandmother had a small frame and a mild temperament. She walked a lot and kept busy even after moving into the nursing home, he said.

"She kept active," he said yesterday. "We used to go up there, and she would be pushing other patients in their wheelchairs."

Indiana Governor Mitch Daniels, who celebrated with Mrs Parker on her 114th birthday, said it had been a "delight" to know her. She must have been a remarkable lady at any age, he added.

Mrs Parker graduated from the state's Franklin College in 1911 and went on to teach in a two-room school for several years.

She married Earl, her childhood sweetheart and neighbour, in 1913.

As was usual at the time, her career came to an end with her marriage and Mrs Parker became a farmer's wife, spending her days tending the home and preparing meals for the dozen men who worked on the farm.

Last year, she noted with pride that she and her husband were one of the first owners of an automobile in their rural area.

Coincidentally, Mrs Parker lived in the same nursing home as Sandy Allen, whom at 7ft 7¼ was officially the world's tallest woman until her death in August.