Everybody will suffer?--university financial crisis 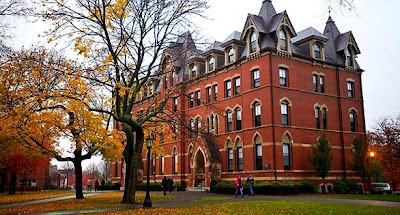 Times of economic strangulation for institutions of higher education is at hand...or so the following article states. But, take a look at the official financial disclosure for the University of Missouri system. Maybe not is all doom and gloom of the highest caliber.

The New York Times
Arizona State University, anticipating at least $25 million in budget cuts this fiscal year — on top of the $30 million already cut — is ending its contracts with as many as 200 adjunct instructors.

And Tufts University, which for the last two years has, proudly, been one of the few colleges in the nation that could afford to be need-blind — that is, to admit the best-qualified applicants and meet their full financial need — may not be able to maintain that generosity for next year’s incoming class. This fall, Tufts suspended new capital projects and budgeted more for financial aid. But with the market downturn, and the likelihood that more applicants will need bigger aid packages, need-blind admissions may go by the wayside.

"The target of being need-blind is our highest priority," said Lawrence S. Bacow, president of Tufts. "But with what's happening in the larger economy, we expect that the incoming class is going to be needier. That's the real uncertainty."

Tough economic times have come to public and private universities alike, and rich or poor, they are figuring out how to respond. Many are announcing hiring freezes, postponing construction projects or putting off planned capital campaigns.

With endowment values and charitable gifts likely to decline, the process of setting next year's tuition low enough to keep students coming, but high enough to support operations, is trickier than ever.

Dozens of college presidents, especially at wealthy institutions, have sent letters and e-mail to students and their families describing their financial situation and belt-tightening plans.

At Williams College, for example, President Morton Owen Schapiro wrote that with last year's negative return on the endowment and the worsening situation since June, some renovation and facilities spending would be reduced and nonessential openings left unfilled.

"There's no evidence of a complete meltdown," Ms. Broad said, "but the problems are serious enough that higher education is going to need help from the government."

And as in other sectors, she said, some financially shaky institutions will most likely be seeking mergers.

The University of Florida, which eliminated 430 faculty and staff positions this year, was told recently to cut next year's budget by 10 percent, probably requiring more layoffs. Financing for the University of Massachusetts system was cut $24.6 million for the current fiscal year.

On Thursday, Gov. Arnold Schwarzenegger of California proposed a midyear budget cut of $65.5 million for the University of California system — on top of the $48 million reduction already in the budget.

"Budget cuts mean that campuses won't be able to fill faculty vacancies, that the student-faculty ratio rises, that students have lecturers instead of tenured professors," said Mark G. Yudof, president of the California system. "Higher education is very labor intensive. We may be getting to the point where there will have to be some basic change in the model."

Private colleges, too, are tightening their belts — turning down thermostats, scrapping plans for new gardens or quads, reducing faculty raises.

But many are also increasing their pool of financial aid.

Vassar College will give out $1 million more in financial aid this year than originally budgeted, even though the endowment, which provides a third of its operating budget, dropped to $765 million at the end of September, down $80 million from late June. President Catharine Bond Hill of Vassar said the college would reduce its operating costs, but remain need-blind.

Many institutions with small endowments, however, will probably become more need-sensitive than usual this year, quietly offering places to fewer students who need large aid packages.

At Dickinson College in Pennsylvania, Robert J. Massa, the vice president for enrollment and student life, said that about 200 applicants last year might have been accepted if they had not needed so much financial help, but that that number might rise to 250 this year.

Dickinson's endowment was $280 million in mid-October, Mr. Massa said, down from $350 million in June. And while more than three quarters of the college's operating budget comes from student fees, some endowment revenue will have to be replaced.

"Here's the rub," Mr. Massa said. "I really don't think that colleges can afford to increase their tuition price at higher than inflation this year. I don't think the public will stand for it. What we've done in higher education is let our dreams and aspirations dictate our cost structure."

Most colleges will have a better sense next month of how many students are struggling, when second-semester tuition bills come due.

Paola Aguilar, a sophomore at Shenandoah University in Winchester, Va., is worrying about whether she can afford to return next year.

"My mom became a Realtor last year to try to earn more money, but that didn't help," Ms. Aguilar said. "I've talked to the people here, and they've helped me out a little more for next semester, but as of right now, if I don’t get more help, I’ll have to leave next year and go somewhere cheaper, near home."

"They'd tell me they were thinking they might have to move off campus next semester and stay three to a bedroom, or give up the meal plan and just eat one meal a day," Ms. Fitzsimmons said.

Shenandoah has started an emergency grant fund for students, increased its loan program and prepared to stretch out spring tuition payments for hard-pressed families.

"We are planning to begin a capital campaign of $150-185 million," said Karen R. Lawrence, president of Sarah Lawrence College. "We will still do that. We're not compromising our ambitions, but the timing will be a little bit deferred."

At the wealthiest institutions, endowment revenue usually covers about a third of operating costs, and most colleges and universities spend a percentage of their endowment, based on its average value over the previous three years, helping to smooth out economic ups and downs.

In recent years, with tuition rising faster than inflation, college affordability has become a significant issue. And with the sharp growth of endowments in recent years — Harvard's hit $36.9 billion this summer — some politicians, notably Senator Charles E. Grassley, Republican of Iowa, have pushed for a requirement that colleges spend 5 percent of their endowments. Many of the wealthiest institutions responded by expanding financial aid last year, with dozens of them replacing loans with grants.

Presidents of many expensive private colleges are wondering how much more tuition pressure families can bear.

"I wouldn't deny that a tuition freeze has occurred to me, but we can't afford heroic gestures," said Sandy Ungar, president of Goucher College in Baltimore.

Given the current climate, some say, colleges need to re-examine all of their economic assumptions.

Granted the following is a June 2008 statement and obviously was prior to the economic debacle in September but I did hear recently [early November] that the system from all sources has appropiated nearly one billion for all opperations.

Office of University Communications
SPRINGFIELD - Missouri State University's budget for the coming year will be about $244 million. The Missouri State Board of Governors today (June 20) approved the operating budget for fiscal year 2009, which begins July 1 and runs through June 30, 2009.

Total budgeted expenses of $244,201,778 will be financed from anticipated revenues totaling $248,400,008. Of the total budgeted operating expenses for the university, the Missouri State-West Plains campus receives $8,947,330.

The 2008-09 Springfield campus budget includes funding for several new faculty and staff positions; a 4.2 percent increase in the salary pool for university employees; an increase of $1.5 million for student scholarships and financial aid; and increases of more than $2 million in utilities and other fixed costs.

"For the third year, we've been able to increase funding for our highest budget priority, which is the university's people," said Missouri State President Michael T. Nietzel. "We funded a significant increase in salaries so that we could hire, retain and reward excellent faculty and staff members. We provided a substantial boost in university-awarded scholarships to attract excellent students. Finally, we've also funded a number of critical new positions, which were strategically selected to help Missouri State meet its goal of developing educated persons."

The new budget includes revenues from a previously announced 4 percent increase in student fees, a 4.4-5.1 percent increase in room and board charges, and expected enrollment growth of 100 additional students. Approximately $40.8 million in scholarships and other financial aid from federal, state and institutional sources will be provided next year to Missouri State students.

Missouri State is budgeted to receive a net of $87,265,095 from the State of Missouri - about $3.5 million more than the university received in fiscal year 2007-08. The state appropriation represents a 4.2 percent increase over last year.
Posted by Mercury at 4:45 AM