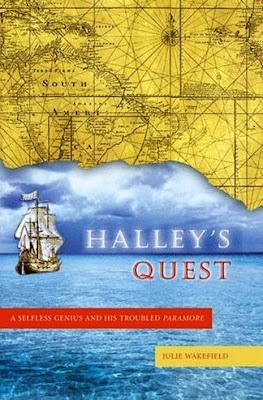 Edmund Halley is best known for discovering and calculating the period of the comet named after him. Before he was astronomer royal, Halley was a notable voyager in search of confirmation of his theory of Earth's magnetism. His three voyages so dedicated, undertaken in ships smaller than a modern oceangoing yacht, failed to bring confirmation of his theory and, moreover, were much troubled by unruly subordinates, a problem as common in those days as weevils in the bread and algae in the water. Halley survived all three voyages, of course, and returned with the basis for calculating the distance between the geographical and magnetic North Poles, a large boon for accurate navigation and mapmaking. Like Dava Sobel's Longitude (1995) and Galileo's Daughter (1999), this is a useful portrait of one of the people who assembled the vast jigsaw puzzle that is our image of the world we live in. It is also substantially as well researched and as readable as Sobel's popular books. Roland Green. Copyright © American Library Association.

"...a terrific read filled with interesting material on the history of science and the development of navigation..." -- Andrew Johnston, Geographer, National Air and Space Museum, Smithsonian Institution.

"...there was much more to this enigmatic friend of Isaac Newton than periodic comets. ...(a) beautifully written book..." -- David Aguilar, Harvard Smithsonian Center for Astrophysics.
Posted by Mercury at 5:13 PM