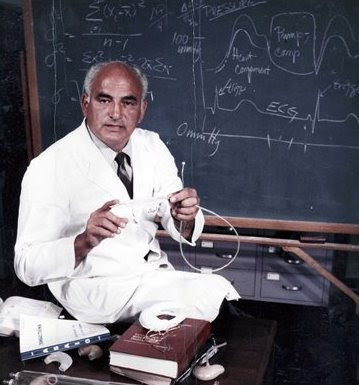 In more than 60 years of surgical practice, Kantrowitz is credited with designing and using more than 20 medical devices that aided circulation and vital functions, including the intra-aortic balloon pump (IABP), the left ventricular assist device (LVAD), and an early version of the implantable defibrillator.

However, Kantrowitz will forever be remembered as the first surgeon in the US to perform a heart transplant. On December 6, 1967, he implanted a heart into a baby with a fatal heart defect, doing so just three days after South African surgeon Dr Christiaan Barnard performed the world's first cardiac transplant.

In an obituary appearing in the New York Times, the newspaper notes that Kantrowitz had practiced hundreds of heart transplants in animals over the previous four years and had been on track to be the first to surgically implant a human heart. The previous year he had been prevented at the last minute because the donor infant had not been declared brain dead.

In addition to replacing hearts, the Times points out that he "concentrated on finding ways to supplement the work of the natural heart with an impressive array of circulatory devices of his own invention." Of these, the most noteworthy invention was the LVAD, which he implanted for the first time in 1972. The IABP, invented in 1967, has been used in roughly three million patients since the 1980s when it went into general use.

Born in New York City on October 4, 1918, Kantrowitz graduated from New York University with a degree in mathematics. He attended the Long Island College of Medicine, which is now part of SUNY Downstate Medical Center, and interned at Brooklyn Jewish Hospital. His medical education was fast-tracked, however, as part of an accelerated program to supply doctors for World War II. He joined the Army Medical Corps as a battalion surgeon, where he served for two years.

In 1948, Kantrowitz practiced surgery at Montefiore Hospital in the Bronx and later moved to the Maimonides Medical Center in Brooklyn, where he held a surgical post. In 1970, Kantrowitz moved his entire team to Detroit, teaching at Wayne State University School of Medicine and practicing at Sinai Hospital.

Kantrowitz is survived by his wife, Jean, and his three children, Niki, Lisa, and Allen, all of whom are doctors.

The New York Times
Dr. Adrian Kantrowitz, who performed the first human heart transplant in the United States in 1967 and pioneered the development of mechanical devices to prolong the life of patients with heart failure, died Friday in Ann Arbor, Mich. He was 90.

The cause was complications of heart failure, said Jean Kantrowitz, his wife of nearly 60 years and a longtime colleague in developing the devices.

On Dec. 6, 1967, when he removed the heart of a brain-dead baby and implanted it into the chest of a baby with a fatal heart defect, Dr. Kantrowitz became the first doctor to perform a human heart transplant in the United States. The patient lived for only six and a half hours, but the operation was a milestone on the way to the routine transplants of today.

Along with Dr. Michael E. DeBakey of Texas and a few others, Dr. Kantrowitz helped open the new era in care for seemingly terminally ill heart patients, using both surgery and artificial devices. His work at Maimonides Medical Center in Brooklyn and Sinai Hospital in Detroit had a lasting impact, starting with his first headlines in 1959, when he gave a healthy dog a booster heart muscle.

Over six decades of surgical practice, he designed and used more than 20 medical devices that aided circulation and other vital functions.

Although his 1967 transplant was the first in the United States, it was not the first in the world, following by three days Dr. Christiaan Barnard’s in Cape Town. But Dr. Kantrowitz had been methodical in laying the groundwork for the procedure. He practiced hundreds of heart transplants in puppies over the previous four years, and had planned a human operation the previous year, but was prevented at the last minute because the donor infant had not been declared brain-dead.

"Although Dr. Kantrowitz had the dedication and perseverance to accomplish this remarkable surgical tour de force, it was the notion that, for the first time, science could view the heart as yet another organ that could be fixed that was a revolutionary concept," Dr. Stephen J. Lahey, director of cardiothoracic surgery at Maimonides Medical Center, said in a statement on the 40th anniversary of Dr. Kantrowitz's transplant.

While many doctors have worked to replace failing hearts altogether with artificial ones, Dr. Kantrowitz concentrated on finding ways to supplement the work of the natural heart with an impressive array of circulatory devices of his own invention. The most influential was the "left ventricular assist device," or LVAD, which, for the first time in 1972, allowed a patient with severe chronic heart failure to leave the hospital with a permanent implant.

Another of his inventions was the intra-aortic balloon pump, described in The New York Times in 1967 as “a long, narrow gas line” inserted through the patient’s thigh that inflated "a six-inch-long sausage-shaped balloon" in the aorta. The device deflated when the heart pumped blood and inflated when it relaxed, thereby reducing strain on the heart, according to Dr. Kantrowitz's theory of "counterpulsation." The device has been used to treat about three million patients since it went into general use in the 1980s.

He also invented an early implantable pacemaker, designed with General Electric in 1962, and captured the first film of the mitral valve opening and closing inside a beating heart in 1951.

His inventiveness extended beyond cardiology. In 1961, inspired by the way the muscles in the heart were stimulated, he was the first doctor to enable paraplegic patients to move their limbs by electronically triggering their muscles.

Adrian Kantrowitz was born on Oct. 4, 1918, in New York City, to a mother who designed costumes for the Ziegfeld Follies and a father who ran a clinic in the Bronx that charged its patients 10 cents a week.

As a boy he worked with his older brother Arthur to construct an electrocardiograph from old radio parts. The brothers later collaborated on the left ventricular assist device.

After graduating from New York University with a degree in mathematics in 1940, Dr. Kantrowitz enrolled in the Long Island College of Medicine (now a part of SUNY Downstate Medical Center) and completed an internship at Brooklyn Jewish Hospital. He earned his medical degree early, in 1943, as part of an accelerated program to supply doctors for the war effort. After serving two years as a battalion surgeon in the Army Medical Corps, Dr. Kantrowitz began a career in cardiac research and became a major figure in the first generation of cardiac surgeons.

From 1948 to 1955, he practiced surgery at Montefiore Hospital in the Bronx. From 1955 to 1970, he held surgical posts at Maimonides Medical Center in Brooklyn, where he led a team that devised many influential devices with support from the National Institutes of Health, including an electronic heart-lung machine and a radio transmitter that allowed paralyzed patients to empty their bladders.

In 1970 Dr. Kantrowitz left Maimonides when "it became apparent that a small community hospital in Brooklyn was not the proper environment for the development of innovative cardiac surgical techniques," according to a recent profile in the journal Clinical Cardiology. Remarkably, he was able to move his entire team of 25 surgeons, engineers and nurses — and with them a nearly $3 million research grant — to Detroit, where he taught at Wayne State University School of Medicine and held surgical posts at Sinai Hospital for the rest of his career.

Besides his wife, Jean, who helped him start a medical device company, LVAD Technology, in 1983, his survivors include three children, Dr. Niki Kantrowitz, a cardiologist in Brooklyn; Dr. Lisa Kantrowitz, a radiologist in Newport Beach, Calif.; and Dr. Allen Kantrowitz, a neurosurgeon in Williamstown, Mass.; and nine grandchildren.

Dr. Kantrowitz received a lifetime achievement award from the American Society for Artificial Internal Organs in 2001. He did not rest on his laurels. This year the Food and Drug Administration approved a clinical trial of his latest cardiac assistance device, which promises to allow seriously ill patients to move around and even exercise.

[Thanks to stringer Tim for the notification.]