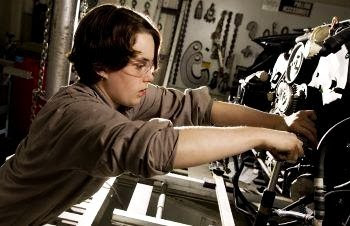 Well, it looks like I am not the only one questioning higher education for all.

"College is not a must"

The Christian Science Monitor
Fall classes are barely under way and already guidance counselors across the country are conferring with students about the courses they need for their high school diplomas. In the process, more than 90 percent will be steered toward a college-prep curriculum, according to the Alfred P. Sloan Study of Youth and Social Development. This, however, is not as laudable as it seems.

The reasons serve as a cautionary tale that the US ignores at its peril. Despite what the public is willing to acknowledge, the importance of a bachelor's degree has been wildly oversold. In 2007, for example, about 67 percent of high school graduates went directly to college, compared with just under half in 1972.

The usual argument put forth in defense of a four-year degree is that it contains a decided wage premium. Studies have consistently found that those who have a degree on average earn more than those who don't. . But all these studies were conducted before the new global economy fully emerged. Its presence calls into question long-held assumptions.

If Alan Blinder, former vice chairman of the Board of Governors of the Federal Reserve System, is correct, the only jobs that will be secure in the next decade will those that cannot be sent abroad electronically. That means plumbers, electricians, and auto mechanics, for example, will be working steadily while many of their degreed classmates will be collecting unemployment checks.

Moreover, since wages vary within any occupation, degree holders who are still employed will not necessarily be earning top salaries. The same holds true for non-degree-holders, of course, but at least they will be in far greater demand because their skills cannot be offshored. As a result, they will be in a position to command wages at the top of their respective brackets.

The Wall Street Journal reported last month that some unionized craft workers already earn more than the average college graduate – and do so without carrying the heavy burden of student debt. The demand for this skilled labor is expected to intensify in the coming years as more workers retire and the economy revives.

All of the preceding assumes, of course, that students in high school actually receive their diplomas. In order to earn them, however, students in many states have no choice but to take a rigidly prescribed sequence of courses that too often are not in line with their needs and interests. At the top of the list is the growing requisite of Algebra 1.

California is experiencing the harm done by this requirement. At present, just more than half of the state's eighth-graders are taking Algebra 1 as part of the new policy mandating the course for all within three years.

Yet already, the requirement has singularly resulted in an increase in the dropout rate beyond the 24.2 percent in the 2006-07 school year. Superintendent of Public Instruction Jack O'Connell has warned that the requirement sets every school in the state up for failure.

For schools serving large numbers of poor and minority students, the results are expected to be disproportionately felt. That's because career and technical education, which has proved instrumental in the past in boosting graduation rates for these students, will lose more funding to accommodate the Algebra 1 mandate.

Even if the funding were somehow to materialize, however, tens of thousands of students will not be allowed to enroll in vocational electives in middle school if they haven't mastered Algebra 1. This unintended consequence has become so threatening that the presidents of the California Manufacturers and Technology Association and the State Building and Construction Trades have jointly denounced the requirement.

The total damage inflicted on students by the college-is-for-everyone mentality is incalculable. Students who cannot measure up to the demands for a college curriculum are made to feel like failures.

Our competitors abroad have long understood and accepted the fact that students can have a productive and gratifying career even when they do not go on to some form of tertiary education. They grant equal respect to these students, rather than regard them as second-class.

But their realistic attitude goes against the romantic notion that unfortunately prevails in this country. What Americans ultimately need to learn is that college is merely the most convenient place to learn how to learn. It is not an absolute determinant.

[Walt Gardner taught for 28 years in the Los Angeles Unified School District and was a lecturer in the UCLA Graduate School of Education.]


Academics--not for everyone
Posted by Mercury at 8:43 AM