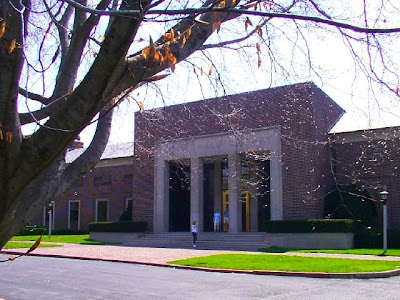 
The previous post was about Huntington Library and I feel obligated to also mention Linda Hall Library which is one of the world's leading collections of science, engineering, and technology repositories. Its collection [over a million volumes] dates from the fifteenth century to the present and includes first editions by Galileo, Newton, and Darwin.

I have used this library for 45 years and must say that in the Fall the grounds are spectacular.

Established in 1946 through the philanthropy of Linda and Herbert Hall (1858-1941), of the Hall-Baker Grain Co., the library has achieved global recognition and stature. The library is open to the public with individual researchers, academic institutions and companies from Kansas City and around the world using the library’s extensive research-level collection. Though not affiliated with its neighbor, the University of Missouri-Kansas City, many students and faculty from UMKC and other local colleges and universities utilize the library each day.

The library's collection includes academic journals, academic conference proceedings, reference works, publications by the government, and technical reports, industrial standards, engineering society conference papers, U.S. patents, and monographs. The library's distinguished History of Science Collection contains first editions of many landmarks of science and technology. Some of the oldest books in the collection date back to the fifteenth century.

The 14 acres surrounding the library are home to over 450 trees representing 58 genera and 165 species. The arboretum and gardens are further embellished by beds of viburnum, tree peonies and Missouri native woodland plants. Seven trees on the property have been designated Greater Kansas City Champion Trees and represent the largest specimens of their species in the metropolitan area: Sweet Birch, European Hornbeam, Hardy Rubber Tree, Double Flowered Horsechestnut, Rivers Purple Beech, Yulan Magnolia, and Anise Leaf Magnolia. The National Wildlife Federation’s Backyard Wildlife Habitat Program has awarded a certificate of merit to the library for its efforts in preserving the natural habitat of the grounds.

The library's William N. Deramus III Cosmology Theater shows images of the cosmos from the Hubble Space Telescope and NASA science missions. These images are delivered via ViewSpace to the library with daily updates (via the internet) that provide the library with new content for visitors. 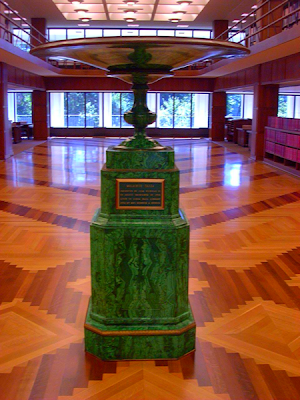 "The Tazza", one of the largest pieces of malachite in North America, stands as the focal point in the center of the main reading room. Parquet wood floors, warm oak paneling and bookshelves, and large windows that overlook the south lawn provide an inviting and comfortable atmosphere.
Linda Hall Library
Posted by Mercury at 6:15 AM