"Einstein's Mistakes"--Ohanian's book on the market 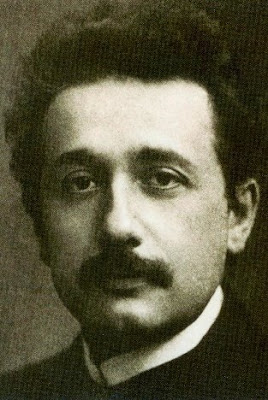 Right on time as promised.

The Wall Street Journal
Ask anyone where E=mc2 comes from and you will invariably be told "Einstein." The name is forever paired with the famous equation, and the two together -- emblazoned on T-shirts, public monuments and book covers -- are synonymous with genius, like the image of the wild-haired physicist himself.

The problem is that Einstein was not the first to discover the equation: It was known for several years before he presented it in his celebrated 1905 paper, "Does the Inertia of a Body Depend on its Energy-content?" Nor was the proof that he provided there complete. It was only in 1911 that the physicist Max von Laue offered a full proof of the startling assertion that energy equals mass times the speed of light squared -- a truth that has ever since affected our understanding of matter and motion, not to mention the fabric of the universe itself. Einstein tried for years to come up with better proof of his own but could never get it quite right.

Hans C. Ohanian's engaging "Einstein's Mistakes: The Human Failings of Genius" is full of such interesting revelations. "Almost all of Einstein's seminal works contain mistakes," he writes. "Sometimes small mistakes -- mere lapses of attention -- sometimes fundamental failures to understand the subtleties of his own creations, and sometimes fatal mistakes that undermined the logic of his arguments."

The pattern endured throughout Einstein's career. Mr. Ohanian finds that four out of five of the seminal papers that Einstein produced in the so-called "miracle year" of 1905, when he was working as a patent inspector in Zurich, were "infested with flaws." Einstein's doctoral dissertation, finally accepted in the same year after a botched first submission, contained so many mistakes in its mere 17 pages that when the editors of his "Collected Papers" sought to republish it decades later, they were forced to add more than 30 footnotes to qualify and correct the mess.

More gravely, there are flaws in Einstein's Principle of Equivalence (concerning gravity and acceleration), an important building block in the general theory of relativity. And there are errors in Einstein's effort to introduce a "cosmological constant" in his equations for space-time. The mathematical constant supposedly confirmed Einstein's belief that the universe was static. He later came to grasp that the universe wasn't static at all; he referred to the constant as his "biggest blunder."

But that realization didn't prevent him from devoting the last 30 years of his life to a futile effort to formulate a unified field theory of the universe. The endeavor, as Mr. Ohanian describes it, was something of a wild goose chase, and the work for it was filled with "mistakes and more mistakes."

A theoretical physicist by training, Mr. Ohanian doesn't write like one. He recounts his chronicle of errors in clear and engaging prose, giving us in the process a short course in the history of modern physics and a witty and provocative account of his subject's life. Anyone who has read the recent biographies of Einstein by Walter Isaacson or Jürgen Neffe may find some of the material familiar, but on the whole "Einstein's Mistakes" is original and fresh. Nor is Mr. Ohanian one of those petty biographers who delight only in turning up the failings -- or turning out the dirty laundry -- of great men. Rather he notes Einstein's errors for a purpose, showing us why his achievement was all the greater for them.

In this Mr. Ohanian provides a useful corrective, for there is a tendency, even today, to deify Einstein and other men of genius, treating them as if they were immortal gods. Einstein himself objected to the practice even as he reveled in his fame. "It is not fair," he once observed, "to select a few individuals for boundless admiration and to attribute superhuman powers of mind and of character to them." In doing so, ironically, we make less of the person, not more, forgetting and simplifying their struggle.

Some of Einstein's lapses, like his rumpled shirts and sockless shoes, are simply endearing -- examples of what the 19th-century criminologist Cesare Lombroso once called the "stupidity" of men of genius. But others reveal a great mind at work. In Mr. Ohanian's telling, Einstein had a "mystical, intuitive" approach to problem solving. That approach, coupled with a stubborn disposition and an irreverent attitude toward established truths, meant that Einstein could be right even when he was wrong. He may never have come up with a perfect proof of E=mc2, but his certainty that the equation was true led him farther than any physicist of the 20th century. He saw the forest even as he bumped into trees.

Of course, not every tree collision in history ends up at a great thought. But Einstein's ability to make use of his mistakes as "stepping stones and shortcuts" was central to his success, in Mr. Ohanian's view. To see Einstein's wanderings not as the strides of a god-like genius but as the steps and missteps of a man -- fallible and imperfect -- does not diminish our respect for him but rather enhances it.

[Mr. McMahon, a professor of history at Florida State University, is currently writing a history of the idea of genius in Western thought.]


New book--"Einstein's Mistakes: The Human Failings of a Genius"
Posted by Mercury at 4:56 PM