Peter Higgs and the LHC 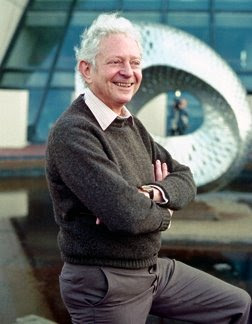 NEWS.scotsman.com
IT MUST be a daunting experience to have a particle that's the key to unlocking the mysteries of the universe named after you, particularly if you are a self-deprecating academic who shies away from the limelight. Even more intimidating must be the knowledge that a Nobel Prize hangs on the efforts of 10,000 scientists from 100 countries to prove the particle's existence, for once and for all. But it's a fate Professor Peter Higgs – the man who thought up the existence of the famous Higgs bosun particle, also known as the God particle, on a walk down Edinburgh's Roxburgh Street in 1964 is finally getting used to.

As the frenzy surrounding the switch-on of the Large Hadron Collider (LHC) 300ft underground on the French/Swiss border climaxed last week, Higgs was making the headlines in a manner more typical of self-publicist and the professor's nemesis Stephen Hawking. With the end of the world forecast by some, the 79-year-old professor was whisked away from the quiet life he spends reading, walking and playing with his grandchildren, to speak to scores of journalists anxious to know if the Earth was about to be sucked into a big, black hole, and how he plans to celebrate if the world's biggest ever experiment proves him right (he says he has a bottle of champagne on ice).

Higgs and Hawking have had a combustible relationship ever since Hawking first poo-pooed his work on particles. And as scientists set out to replicate conditions minutes after the Big Bang, their row erupted into public again. When Hawking said that it would be "more interesting" if the particle was not found, Higgs hit back, saying the world's most famous physicist's work on the subject wasn't "good enough".

It was a rare display of irascibility from a man who, on coming up with his theory, wrote a note to one of his PhD students which read: "This summer I have found something that is totally useless", and who has bent over backwards to appease two scientists who came with the same theory at roughly the same time and are sore that he got all the credit. Robert Brout and Francois Englert had long resented the fact their contribution had been overshadowed. But a few years ago, Higgs sought them out and made peace with them. "They had reason to be aggrieved," he said. Higgs, an atheist, who has two sons, is also embarrassed by the God particle tag, even though it only came about because the publishers of scientist Leon Lederman's book on the theory wouldn't allow him to call it "the goddamn particle" – a name inspired by its elusiveness.

Born in Newcastle in 1929, Higgs' childhood was a trifle unstable. A combination of poor health – asthma followed by pneumonia – and frequent moves caused by his father's job as a BBC sound engineer meant he was taught at home. Then, when he moved with his mother to Bristol and attended Cotham Grammar School, his education was disrupted by the war. Nevertheless, Higgs proved a gifted pupil. Inspired by the work of one of the school's alumni, father of quantum mechanics Paul Dirac, he decided to study theoretical physics, eschewing Oxford and Cambridge for King's College, London, where it became clear he was hopeless at experiments. "There were accidents," he has said mysteriously.

Higgs had long had an affection for Edinburgh – having hitch-hiked to the Festival – and jumped at the chance to become a lecturer at the city's university in 1960. There, he began to be intrigued by the question of what gives matter its weight. It may be 44 years ago, but Higgs can clearly recollect the moment it all started to make sense. It was Thursday, July 16 and he was sitting in the departmental library at the University of Edinburgh, reading an article with which he disagreed. An idea began to crystallise and by the following Monday as he walked to his university office, he had perfected his theory in his own mind.

Here comes the science bit. Concentrate. Higgs believed the idea that particles were massless when the universe began, acquiring their mass a fraction of a second later, as a result of interacting with an all-pervading field, called the Higgs field, which is carried by the Higgs particle.

Some scientists believe its discovery could bring to light entirely new types of strong interactions, while others claim it could reveal a new fundamental physical symmetry called "supersymmetry".

Not that Higgs' theory was an immediate hit in scientific circles. Indeed his lack of pomposity may stem from the length of time it took for anyone to recognise the importance of what he was saying. The first article he presented was rejected by the editor of the European Journal of Physical Letters, based, somewhat ironically, at the Central European Research Network (CERN), which is in charge of the LHC experiment. A revised article, still less than two sides of A4 paper, was accepted by an American journal, the Physical Review Letters the following month. Later, the Higgs particle would become part of the Standard Model – the framework of theoretical physics that describes how fundamental particles interact. And in 1966, Higgs was invited to speak at the Institute for Advanced Study in Princeton, New Jersey – where Einstein and Oppenheimer once worked – one of the highest accolades a scientist can receive.

As the prizes stacked up, Higgs became more engrossed in his work, his marriage to Jodie, an American, began to suffer and they split up in 1972. But then his divorce began to take its toll on his work. "After the break-up of my marriage, I think I just lost touch with the things I should have been learning about just to follow up my own work. I couldn't keep up," he has said. In 1980, Edinburgh University awarded Higgs a professorship and he devoted more of his energy to teaching and administration.

Throughout this time, his passion for politics continued unabated and he held strong views on those issues where science and ethics collide. A member of CND in the 1960s, he left when the group extended its remit from campaigning against nuclear weapons to campaigning against nuclear power. And he supported Greenpeace until the group opposed genetically modified organisms.

Higgs finally retired from the university in 1996. The LHC experiment, however, has thrust him, somewhat reluctantly back into the thick of things. Last week, as 70,000 members of the public went to look at the 17-mile long machine, Higgs too went underground to see the two huge detectors that will search for his particle.

If the scientists find it, it will be the crowning moment in Higgs' illustrious career and the bubbly will be popped. And if they don't, the master of the understatement admits he'll be "rather sad". "If it isn't found, then I no longer understand what I think I understand," he said.