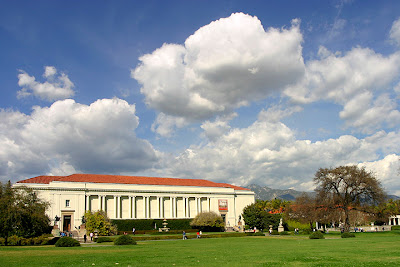 Pasadena Now.com
The Huntington Library will open a new permanent exhibition on Nov. 1, showcasing some of science's greatest achievements, from Ptolemy to Copernicus, Newton to Einstein. The 2,800-square-foot Dibner Hall of the History of Science comes as a result of the marriage of The Huntington's history of science materials with the Burndy Library, a 67,000-volume collection of rare books and manuscripts donated to The Huntington in 2006 by the Dibner family of Connecticut. Combining the two collections makes The Huntington one of the world's most important centers for the study of the history of science.

"We're calling this 'Beautiful Science: Ideas that Changed the World,'" says Daniel Lewis, The Huntington's Dibner Senior Curator of the History of Science & Technology. "We want people to think about the beauty of science in a historical context-the elegant breakthroughs, the remarkable discoveries, and the amazing people and stories behind them."

Lewis has highlighted four areas of exploration: astronomy, natural history, medicine, and light. A gallery on each focuses on the changing role of science over time, particularly the astonishing leaps in imagination made by scientists over the years and the importance of written works in communicating those ideas. Works in the exhibition represent centuries of thought, showing how knowledge has become more refined over time.

For example, until the 15th century, Earth was generally considered the center of the universe, and the gallery devoted to astronomy will show just how that perspective shifted-beginning with a 13th-century copy of Ptolemy's Almagest, a classic Greek text from the second century. The version on display is a Latin manuscript transcribed by monks in southern France in 1279. The work was heralded as a remarkable mathematical achievement and did a sophisticated job of predicting the position of the planets. But it wasn't until sometime later that scientists determined that the planets revolved around the Sun, points made in various degrees by Copernicus and Kepler. The 1566 edition of Copernicus' De Revolutionibus includes censor marks by the first owner, a concession to the pressure of Church officials who considered the work blasphemous. Over time, the planets would be further studied, and their motion better understood, through the works of Galileo Galilei and Isaac Newton. Also in the exhibition: a 1913 letter from Einstein to the great astronomer George Ellery Hale and a 1923 logbook from astronomer Edwin Hubble, writing about the observations he made using the 100-inch Hooker telescope atop Mt. Wilson.

"I see this as an extremely important moment for The Huntington," says Steven Koblik, Huntington president. "This exhibition has the potential to give visitors a much deeper understanding of how we know what we know, how knowledge has advanced over time, and how we have relied on a base of evidence to build that knowledge. People will walk into this exhibition space and be completely awestruck by the power and range of human achievement on display." An accompanying education program for middle and high school students will highlight the scientific method of experimentation: observing, testing, measuring results, and reporting on them.

The four themed galleries in Dibner Hall comprise a reconfigured wing of the Huntington Library, which was built in 1919. A fifth gallery will be a designated reading area, where visitors can curl up in oversized chairs with a copy of The Origin of Species or one of a number of books and ponder great moments in the history of science.

Working with in-house designer Karina White, Berkeley-based Gordon Chun Design has transformed a space formerly occupied by 18th-century French art, installing books among vibrantly colored walls, interactive computer terminals, and replicas of scientific instruments, including a Galilean telescope and a 17th-century microscope. A prism experiment shows how white light can be split into the colors of the rainbow and how those colors can then be recombined into white light.

"One of the challenges of library exhibits is that we are limited to showing just one opening of a book at a time," says White. The team working on the display is addressing that challenge by reproducing dozens of pages from books and scattering them on the surrounding walls.

The impact is particularly effective in the gallery devoted to natural history. "The effect, we hope, is reminiscent of the curiosity cabinets so popular in the 18th and 19th centuries," says Lewis, referring both to rooms and small boxes that were assemblages categorized by scientific theme and meant to evoke wonder. An additional goal is to get people as close to the original books as possible-"to see the detail they would miss even at a modest distance," says Lewis.

A display in the reading room carries the goal further, allowing visitors to leaf through a 300-year-old book. They can also turn virtual pages of rare volumes at a computer terminal in the natural history section.

The exhibition hall is made possible by the Dibner family, celebrating Bern and David Dibner and the Burndy Library; the Ahmanson Foundation; and Anne and Jim Rothenberg.

The Huntington Library, Art Collections and Botanical Gardens (or The Huntington) is an educational and research institution established by Henry E. Huntington in San Marino, California, USA. In addition to the library, the site houses an art collection strong in English portraits and French eighteenth-century furniture and botanical gardens that feature North America's strongest collection of cycads.

The library contains an extensive collection of rare books and manuscripts, including a Gutenberg Bible, the Ellesmere manuscript of Chaucer, and thousands of historical documents about Abraham Lincoln including the papers of the president's bodyguard Ward Hill Lamon. The rare books and manuscripts in the library are among the most heavily-used in the United States. The library holds some 6.5 million manuscripts and more than a million rare books. It is the only library in the world with the first two quartos of Hamlet; it holds the manuscript of Benjamin Franklin's autobiography, the first seven drafts of Henry David Thoreau's Walden, John James Audubon's Birds of America, a collection of manuscripts and first editions of the works of Charles Bukowski and many other great treasures.

The library often places these and similar items on view for the general public; however, actual use of the collection is extremely restricted, generally requiring at least candidacy for a doctoral degree and letters of recommendation from known scholars. Nevertheless, these precautions are understandable given the delicate and rare nature of the materials.

The art collection consists of the works of 18th and 19th century British and French artists, and 18th, 19th, and early 20th century American artists, as well as changing exhibitions. The best known works in the collection are The Blue Boy by Thomas Gainsborough and Sarah Barrett Moulton: "Pinkie" by Thomas Lawrence.

In 1999, the Huntington acquired the collection of materials relating to Pre-Raphaelite artist and designer William Morris amassed by Sanford and Helen Berger, comprising stained glass, wallpaper, textiles, embroidery, drawings, ceramics, more than 2000 books, original woodblocks, and the complete archives of Morris's decorative arts firm Morris & Co. and its predecessor Morris, Marshall, Faulkner & Co. These materials formed the foundation for the 2002 exhibit William Morris: Creating the Useful and the Beautiful.

The Huntington's superb botanical gardens cover 120 acres (485,624 m²) and the theme gardens contain rare plants from around the world. The gardens are divided into over a dozen themes including the Australian Garden, Camellia Collection, Children's Garden, Desert Garden Conservatory, Conservatory for Botanical Science, Desert Garden, Herb Garden, Japanese Garden, Lily Pond, North Vista, Palm Garden, Rose Garden, Shakespeare garden, Subtropical and Jungle Garden and a Chinese Garden (Liu Fang Yuan or the Garden of Flowing Fragrance) now open in the northern end of the property. In addition, a large open field planted with Eucalyptus trees serves as a re-created "Australian Outback". The Huntington has a program to protect and propagate endangered plant species. In 1999 and 2002, a specimen of Amorphophallus titanum, or "corpse flower", bloomed at the facility.

The Huntington Desert Garden, one of the world's largest and oldest collections of cacti and other succulents, contains plants from extreme environments, many of which were acquired by Mr. Huntington and Mr. William Hertrich (the garden curator) in trips taken to several countries in North, Central and South America. One of the Huntington’s most botanically important gardens, the Desert Garden, idealized by Mr. Hertrich, brings together a plant group largely unknown and unappreciated in the beginning of the 1900’s. Containing a broad category of xerophytes (aridity-adapted plants), the Desert Garden grew to preeminence and remains today among the world’s finest, with over five thousand species, including cacti and succulent plants, or plants that store water in leaf, stem, or root.
Posted by Mercury at 5:40 AM

Thankyou for bringing light to the Huntington Gardens, a place I must visit one day soon! I am in Florida, but will travel out to visit this place, and also the Desert Garden in Pheonix, AZ. I am a succulent lover. They are thrilling to me, for some strange reason! Gonna go now and have more look around your blog!

Nothing quite like books and fabulous gardens. I am familiar with the Huntington Library but never having been there personally, I was not aware of the 120 plus acres of botanical gardens. I am partial to Midwestern hardwoods. Send photos if you reach the library grounds.

"Darwin's Garden," an exhibit from the New York Botanical Garden, will be at the Huntington Gardens this fall:
http://thedispersalofdarwin.blogspot.com/2008/08/darwins-garden-exhibit-huntington.html