LHC shut down for maintenance 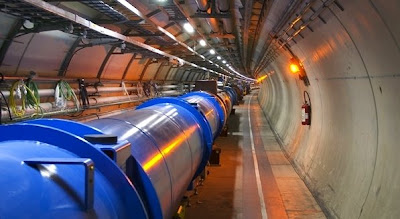 I suppose this will make some people happy.

BBC News
The Large Hadron Collider near Geneva will be out of action for at least two months, the European Organization for Nuclear Research (Cern) says.

Part of the new collider was turned off for the weekend while engineers investigated a magnet failure.

But a Cern spokesman said the damage to the £3.6bn ($6.6bn) particle accelerator was worse than anticipated.

The failure, known as a quench, caused around 100 of the LHC's super-cooled magnets to heat up by as much as 100C.

The fire brigade were called out after a tonne of liquid helium leaked into the tunnel at Cern, near Geneva.

Cern spokesman James Gillies said the sector that was damaged will have to be warmed up well above absolute zero so that repairs can be made.

Cern would have to shut off the new particle collider do to the repairs, he added.

The first beams were fired successfully around the accelerator's 27km (16.7 miles) underground ring over a week ago.

The crucial next step is to collide those beams head on. However, the fault appears to have ruled out any chance of these experiments taking place for the next two months at least.

The quench occurred during final testing of the last of the LHC's electrical circuits to be commissioned.

At 1127 (0927 GMT) on Friday, the LHC's online logbook recorded a quench in sector 3-4 of the accelerator, which lies between the Alice and CMS detectors.

The entry stated that helium had been lost to the tunnel and that vacuum conditions had also been lost.

It added that the Cern fire brigade had been called to the scene.

he superconducting magnets in the LHC must be supercooled to 1.9 kelvin above absolute zero, to allow them to steer particle beams around the circuit.

As a result of the quench, the temperature of about 100 of the magnets in the machine's final sector rose by around 100C.

The setback came just a day after the LHC's beam was restored after engineers replaced a faulty transformer that had hindered progress for much of the past week.

physicsworld.com
The Large Hadron Collider (LHC) has lost up to a tonne of liquid helium after some of its superconducting magnets inadvertently heated up this morning, physicsworld.com has learnt.

A log entry written by the current LHC co-ordinator at 11:27 am CET (10:27 am BST) states that there has been a “massive quench” in sector 3–4. Quenches occur when superfluid helium in the magnets rises above its operating temperature of 1.9 K, and can be caused, for example, when a proton beam veers off course.

According to the entry, firefighters were dispatched to that area of the tunnel. It also says that the vacuum in that part of the beam pipe was lost.

A source at CERN, the European lab hosting the accelerator, says that the quench caused one tonne of superfluid helium — about 1% of the LHC’s total — to escape.

An official spokesperson was not available for comment. However, a message on the machine’s website states: "During the commissioning of the final LHC sector (sector 3–4) for 5 TeV operation, an incident occurred at 12:05 [am] today resulting in a large helium leak into the tunnel. Further details are not yet known. Investigations will continue over the weekend and more information will be made available as soon as possible."

An LHC status report on the same website shows that temperatures are now being brought down, implying that technicians have been able to replace the lost helium.

The problem will be a disappointment to the operations team, who had enjoyed a highly successful media day last week when they circulated beams of protons in both directions around the machine’s 27 km-long ring.

Must have been chaos...