Sphinx is being assaulted 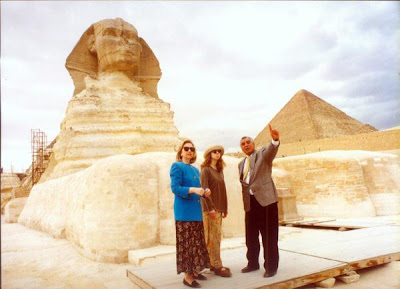 Hillary Clinton and daughter Chelsea with Zahi Hawass [secretary-general of the Supreme Council of Antiquities of Egypt] in 1991 assured them that the Sphinx was not in danger.
Things change and I suppose there is not much in the way of permanent preservation that can be done. The Sphinx is probably the oldest mammoth artifact existing and is now being assaulted by pigeon droppings.

"Keep an eye on the Sphinx"

Al-Ahram Weekly
The secretary-general of the Supreme Council of Antiquities had much to tell his interviewer on "Spotlight". Zahi Hawass waxed lyrical about "exciting things" that have been happening in the field of archaeology -- the discovery of a new tomb of a queen at Saqqara that has yet to be formally announced; the entrance to two tombs in the Valley of the Kings on which excavation will begin in October; and "big happenings" in Aswan, Edfu and Kom Ombo. He was enthusiastic about the "improvements" at Dendera and the Step Pyramid at Saqqara, and gave details of the new museums at Rashid, Arish, Minya and Amarna, as well as site management at Beni Hassan and Tuna Al-Gabel.

Zahi Hawass raved about the progress on the Civilisation Museum at Fustat and the Grand Egyptian Museum at Giza. Indeed, he also had much to say about the plan to upgrade the Pyramid Plateau and turn it into "a tourist-friendly and hawker-free zone". He mentioned that the project's security component included installing cameras, alarms and motion detectors, as well as building up a 20-kilometre fence.

I wonder if the new electronic security devices, however, while monitoring the movements of tourists and hawkers, cameleers and horse riders, will be able to pick up the unwelcome winged creatures that are finding a comfortable and shady roost in the eye and ear cavities of the Sphinx, and causing damage to the stone with their droppings. Apparently the pigeons are pecking away at this most grand and famous of monuments, finding in it an appetising calcium meal. Back in 1991, after a Save the Sphinx programme of restoration, Hawass declared that the monument was not in any danger. "Its head and neck can live for another thousand years," he declared at the time. He could not possibly have foreseen this newest threat -- the high level of acidity in the droppings of birds and its destructive effect on the stone. Just how serious is the problem?

I am reminded of the press coverage in the United Kingdom back in November 2002, about the health hazard and the "mess" created by some 4,000 pigeons in Trafalgar Square, when campaigners called for the right to continue to feed the birds. The British press made a great hue and cry about that. "Court threat over Trafalgar pigeons", "In defence of pigeons" and "Pigeon protest ruffles feathers", the headlines screamed. Well, we in Egypt are not that concerned about birds, and we certainly don't cast birdseed around to feed them. Yet pigeons here in Egypt have become thoroughly urbanised. They habitually build nests and raise families in garages, on balconies, and in and around satellite dishes. So once they pass the word around that the Giza Sphinx offers singularly superior accommodation for Rest and Recreation than Greater Cairo's concrete jungle, perhaps they will fly to Giza in ever larger numbers.

The Sphinx was carved from a single block of limestone left over in the quarry used to build the Pyramids, and scholars believe it was sculpted about 4,600 years ago by King Khafre, whose Pyramid rises directly behind it. Half human, half lion, it has the head of the king with his nemes head covering, and its body is 57 metres long and 20 metres high. It certainly exudes an aura of mystery: the Arabs called the Sphinx Abul Hol, Father of Terror; and 18th- and 19th-century visitors claimed that it was the work of an extremely ancient civilisation that had completely disappeared.

If more pigeons are attracted to the area, their droppings will cause more and more damage. The monument has undergone numerous restorations over the millennia, beginning with one conducted in about 1400 BC by the prince who later became Pharaoh Tuthmose IV, who dreamt that the Sphinx asked him to clear the sand around it in return for the crown of Upper and Lower Egypt. It was cleared, and he was crowned Pharaoh, but wind- blown sand soon buried the monument to its neck -- its nose, incidentally, had been missing for at least 400 years by the time Napoleon arrived in Egypt in 1798 with the band of French savants who took measurements of the head.

The first attempt to clear away the sand in modern times was made in 1816/17 by a Genoese merchant, Caviglia, who did not get very far. The next attempt was made in 1853 by Auguste Mariette, founder of the Egyptian Antiquities Service. He managed to clear the sand right down to the rock floor of the surrounding ditch, and the task was taken up by his successor, Gaston Maspero. The French engineer Emile Baraize, working for the Antiquities Service, did a more thorough job. He not only dug along the Sphinx's body, but found ancient restoration blocks scattered about which he replaced, adding some small brick-sized blocks of his own.

More recently restoration was carried out in the 1950s and 1970s, when some of the damaged masonry was patched up around the lower parts of the Sphinx's body. In 1979 the Sphinx Project of the American Research Centre in Egypt (ARCE), in collaboration with the German Archaeological Institute in Cairo, produced the first scale elevations and detailed plans of the monument. It was discovered that the stone used in the modern restoration of the monument flaked and powdered more rapidly than the earlier restoration so various steps were taken to consolidate the stone.

In the 1980s, the famous Sphinx was subjected to intensive care. Chemicals were injected into the stone for strengthening, but the project had to be abandoned because the chemicals unexpectedly caused the treated parts to flake off, taking with them some of the original rock surface. A Sphinx Committee was formed, comprising scholars of the EAO, Egyptian universities, and foreign experts, and they all agreed that the "new" and "harmful" cement and gypsum mortar of previous restorations should be removed immediately and replaced with stones that matched the 1979 restoration, using the plan and elevations of the ARCE Sphinx Project.

Oh dear! Poor Sphinx. Work went ahead. Its paws and rear haunches were covered with nearly 2,000 limestone blocks held in place with cement (the suitability of which was later questioned). Meanwhile, its neck caused considerable concern because it seemed to be eroding more rapidly than the rest of the statue. Culture Minister Farouk Hosni called on UNESCO to form a committee comprising 13 specialists in the fields of archaeology, reconstruction, restoration and geophysics, to discuss procedures needed to protect the Giza Plateau generally and the Sphinx's neck in particular. It was even thought a good idea to ask the British Museum to send the Sphinx's beard of the back to Egypt so that it might ensure more stability to the head. The British Museum was said to be willing, as long as Egypt covered the cost. So the matter ended there.

The committee members, meanwhile, agreed that the Sphinx was suffering from weathering and chemical saturation by carbonic, nitric and sulphuric acids "produced by chemical pollutants associated with neighbouring cement and other industrial facilities," as well as vibration caused by dynamiting in quarries in the vicinity, not to mention the rumbling of heavy tourist buses across the plateau. Additionally, there was seepage from the inadequate sewage system of the neighbouring Nezlet Al-Simman village.

When, in 1988, a sizable piece of bedrock toppled from the right shoulder of the Sphinx it caused much concern. A "Save the Sphinx" campaign was immediately launched with a large initial donation by American Express in Cairo, as well as the Getty Conservation Institute of California in collaboration with the EAO. A six-and- a-half-metre-high mini-observatory was set up on the statue's haunches to monitor the direction and changes in the speed of the wind, the humidity and pollutants in the atmosphere, the temperature and effects of water and salt on limestone. Could it have monitored winged creatures? Probably not.

The Sphinx naturally remained a subject of debate and, not surprisingly, there was a windfall of contradictory statements in the press. One report in Al-Ahram daily newspaper in 1991 once again outlined the rapid state of the deterioration of the neck. Yet, in Al-Gomhuriya a day later, a statement appeared saying that the Sphinx was not in any danger at all; that the slaking stone on its chest was not an alarming phenomenon because the monument could easily be treated by chemical processes. Salah Lamei, professor of architecture and member of the Sphinx Restoration Committee; Mahmoud Taher, director- general of the Information Department of the EAO; and Shawki Nakhla, director-general of restoration, all agreed that the statue was only suffering to a minor degree. The problem, they claimed, was a natural result of the monument being subjected to heavy rainfall, humidity and wind. Farouk Hosni stated moreover that there was "no point in making media propaganda out of it". That was when Hawass made his comment of the Sphinx surviving for another thousand years.

A long-term master plan for the Giza Plateau was worked out under the directorship of Zahi Hawass and in collaboration with American Egyptologist Mark Lehner of the Stanford Research Institute (who earlier carried out a project to probe the ground beneath the Sphinx in an electrical-resistivity survey). Egyptologists and geologists studied the geology of the Giza formation; a workmen's village with a camp for craftsmen, overseers, and storerooms was excavated; and an enormous bakery was discovered where no fewer than 14 types of bread were made to feed the workmen. The veil of obscurity surrounding the Pyramids builders was coming to light. As for the Sphinx, a comprehensive article appeared in the October 1994 issue of Archaeology Magazine entitled "The Sphinx: who built it and why?" which carried a computer-generated contour map of the plateau and images of the geographical strata, but no mention of its condition -- or the possibility of the new threat.

How much damage are the pigeons causing? And how can the problem be remedied? Perhaps a pigeon-repellent device, similar to the bat-repellent device used (against the law) in some churches in the UK, might do the trick! But who would finance such a project?
Posted by Mercury at 9:32 AM