Amateur scientist will collaborate with astronomers 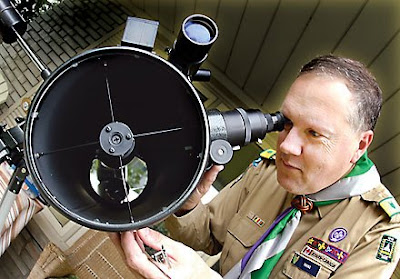 David Gamey
Another example of a society of amateur scientists working with professionals.

MOST telescope to study Betelgeuse this December

The Guardian
When University of British Columbia astronomers focus their space telescope this December on Betelgeuse, one of the brightest stars in this country's winter night sky, David Gamey will be spellbound.

Scientists in charge of the MOST (Microvariability and Oscillation of Stars) space telescope recently named the Princess Gardens' resident one of two Canadian amateur astronomers who will trade in their backyard telescopes for one 820 kilometres up in space.

Pronounced "Beetlejuice," the star is a red supergiant in the shoulder of the constellation Orion the Hunter, about 800 times bigger than the Sun, and near the end of its life. Scientists expect it to die in a supernova explosion.

"It's very neat," Gamey, 49, an information security expert, said of his one-page proposal's approval. "(Betelgeuse) is a celebrity. As one of the largest, brightest and best-known stars in our sky, it holds a lot of fascination."

Betelgeuse bloats up and down, has giant spots, and is the first star outside our solar system to be seen as more than a dot by the Hubble space telescope, Gamey said.

The MOST team chose Gamey's Betelgeuse, and Gordon Sarty of Saskatoon's proposed target of a star called LS 5039 locked in an orbit with a black hole, from among 30 proposals nationwide.

"It's like a cosmic version of the Olympics. MOST means My Own Space Telescope," UBC astrophysics professor and MOST Mission Scientist Jaymie Matthews said of the competition.

Giving Canadians, including elementary and high school students, access to MOST was part of the team's initial proposal to its funder, the Canadian Space Agency.

"You don't have to be a rocket scientist to look up in the sky and wonder what's out there," Matthews said. "...It seemed natural to let Canadians have a chance to explore that through Canada's first space telescope."

MOST is nicknamed "The Humble" due to the modest $10-million price tag of the suitcase-sized space telescope. It launched into space in 2003.

The space telescope detects subtle rapid oscillations in stars and measures stars' brightness variations for four to six week to gain information about a star's age. Its role expanded to study planets around other stars, including the search for "exo-Earths" - alien counterparts to our world.

Betelgeuse is a "natural target" for MOST, Matthews said, in terms of both its brightness and its location in the sky.

"We will probe the internal structure of Betelgeuse to test the theories of what a star is like so close to its death via a supernova explosion," Matthews said, adding there is growing interest within the research community in the astrophysics of supergiant stars like Betelgeuse.

While the MOST team will do the actual observing of the star at UBC, Gamey will work with MOST scientists on the interpretation of Betelgeuse data. Matthews said Gamey will be the lead author in the eventual scientific publication on Betelgeuse, adding to the more than 20 scientific papers published by the MOST team in the past 18 months.

Gamey hopes to take his Humber West district 433rd Toronto Scouts and Cubs to a MOST ground station in Mississauga in December to take a peek at MOST's view of Betelgeuse.

It was his cubs and scouts' interest in astronomy, when he became a Scout leader eight years ago, that reignited his childhood passion for star-gazing, he said.

"Kids are fascinated by this bright star, asking me questions like: When will it explode? Will our Sun turn into a supergiant like Betelgeuse?" said Gamey, calling his cubs and scouts his "collaborators" on his winning proposal.

Last year, the kids made a full-scale model of MOST out of cardboard, tin foil and paint, and entered it into its annual 433rd hobby show.

To earn an astronomy badge, cubs need to be able to find north, find five constellations and know about the phases of the moon and tides, among other things.

To his cubs, Gamey is known as "Mang," a nod to the lesser-known bat character in the Disney film, The Jungle Book. Why Mang? "It was a good fit. Both astronomers and bats are nocturnal."

Gamey had given up astronomy when he sighted Haley's Comet with a pair of binoculars while vacationing in the Caribbean in 1986. Haley's Comet can be seen from Earth only once every 75 years.

But his best night of star gazing was Aug. 14, 2003. While a blackout plunged 50 million North Americans into darkness, Gamey gazed skyward, fascinated by what he saw.

"I was able to look at clusters of stars," he said. "There's the Globular Cluster, a ball of about 30,000 stars around Hercules. The Ring Nebular looks like a giant cosmic smoking. There's the Whirlpool Galaxy underneath the handle of The Big Dipper. It was the first time I found it myself."

Gamey star gazes at Scout camps, his cottage in Maine, on the front lawn of his central Etobicoke home, or in neighbouring Lloyd Manor Park or West Deane Park.

Last week, Gamey showed a reporter his astronomy toolbox. There's a 200mm Newtonian scope with a fast lens and wide field of vision, excellent for photography. But it's big. Gamey only takes the scope to Scout camp when he can drive it to the campsite.

"You can see planets, the stripes on Jupiter, the moons around Jupiter, the rings around Saturn," Gamey said of the Newtonian scope's capabilities. "All of a sudden, a dim satellite can pass through your line of vision."

Gamey also has a Sky-Watcher, a smaller, 80mm blue portable telescope that can be carried in a backpack.

Then there's his 11-power binoculars: "Your first telescope should be a good pair of binoculars."

For parents interested in getting their child started on astronomy, Gamey recommends they patronize either Eston Science or Khan Scope Centre, both on Dufferin Street: "You get good optics for the same money or less (than popular children's toy retailers)."

Gamey traces his own fascination with the world beyond to his childhood.

"I grew up with the space program, people strapped to the top of big fireworks, basically. There's the imagination aspect of it. Getting out on a really dark night away from the city. Just the beauty of it..."

Value of amateur scientists--"Hanny's Voorwerp"
Posted by Mercury at 11:47 AM

Email ThisBlogThis!Share to TwitterShare to FacebookShare to Pinterest
Labels: amateur scientists, astronomy, David Gamey. MOST, Microvariability and Oscillation of Stars