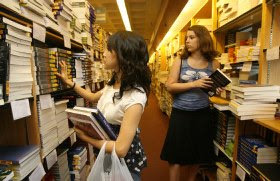 "Nationally, the most popular major chosen by college students is business, according to statistics compiled in 2006 by the U.S. Department of Education."
Is this really the material for higher education and better suited for specialized institutions. What happened to the sciences and hard academics?

"Undergraduates all business in picking major"

The Providence Journal
College students are making their annual migration back to Rhode Island campuses for the beginning of the fall semester. After the U-Hauls are unpacked and the goodbyes are said, there’s the nettlesome little matter of deciding what to study, a decision that can shape the rest of a student's life.

Incoming freshmen are faced with a dizzying number of choices in majors and courses, many of which were not available in high school. Brown University, for example, offers 95 majors [which Brown calls "concentrations"], said Katherine Bergeron, dean of the college.

Nationally, the most popular major chosen by college students is business, according to statistics compiled in 2006 by the U.S. Department of Education. The next most popular major is social science and history, then: education, psychology, visual and performing arts, and majors related to "health professions and clinical sciences."

Thirty-five years ago, in the 1970-71 school year, education was the most popular major, followed by social sciences and history. Business was third, English, fourth, and engineering, fifth.

By 1980-81, business was the top major, and has maintained that spot for 25 years, according to the Department of Education figures.

Christopher Lydon, associate vice president for admission and enrollment planning at Providence College, said the most popular majors at PC are, in order: biology, finance, management, political science, psychology, elementary/special education and marketing. Trends in popularity from year to year can be subtle, he said.

"We’re a little lighter on English majors this year," he said. "We're seeing a growth in science programs." Why? Maybe it's because the school recently overhauled its science labs, which prospective students are visiting on their college tours. "That science growth may be specific to us," he said.

Generally, students are required to pick a major within their first three semesters.

PC has seen the number of students enrolling as undeclared majors drop from 55 percent seven years ago to 42 percent this year, said Lydon. "The freshmen coming in have a better sense of what they want to study," he said.

At Brown, biological sciences is the most popular concentration, as it was 10 years ago, according to 2007 statistics from Brown. The next three most popular are history, international relations and literatures in English –– the same order as in 1998. But in the past few years, there has been a subtle shift from the humanities –– which includes English literature, philosophy and religious studies –– toward the social sciences, which include economics, international relations and political science, said Bergeron.

Enrollment in economic courses is currently high, she says, which is part of a national trend. A new concentration at Brown –– commerce, organizations and entrepreneurship –– is proving popular. Contemporary students have shown curiosity at how global economic systems work, she said.

At the University of Rhode Island, nursing was the top major in 2007, followed by: communication studies, psychology, pharmacy, and physical education, according to statistics provided by URI. Nursing’s popularity has jumped dramatically in just the past few years: it was the fifth most popular major 10 years ago, and was still fifth just five years ago. Bobbi Koppel, director of career services at URI, says it’s impossible to know exactly what motivates students to choose a major. "Sometimes they get into a class and they love the instructor and the instructor inspires them" to stay with the course of study, she said.

Why so many more nursing majors? Koppel offered a hypothesis: health care is a growing field with many job opportunities, nurses can work flexible hours, nursing is seen as a "giving" career, and the status of nursing as a profession has increased.

World events, the economy and even popular culture seem to affect which majors are the most popular, Lydon said.

"We all remember the L.A. Law pre-law phenomenon in the 1980s," he said, referring to the snappily-written television drama about beautiful lawyers tackling life-and-death cases in a fictitious Los Angeles law firm. After the show gained popularity, colleges around the country noticed an increase in the number of pre-law students, he said. Next came the ER phenomenon, from the hospital-based drama that began its television run in 1994. The show appeared to increase the number of students enrolling in pre-med programs, he said.

Currently, schools with forensic science programs are experiencing a CSI: Crime Scene Investigation effect — an increase in students interested in the forensic sciences — he said. And since the 9/11 terrorist attacks, "More students have expressed interest in government service."
Posted by Mercury at 6:08 AM