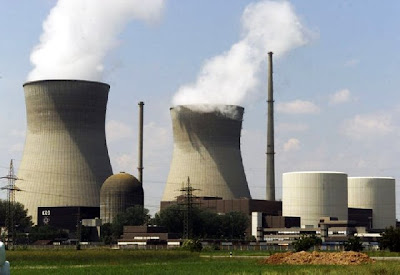 An Op Ed opinion by Derrick Z. Jackson of The Boston Globe raises once again the problems of nuclear energy plans: Cost and waste. But yet, both candidates throw the concept into the fray of alternative energy sources. Is such a notion ridding piggyback and cloaked along with more popular choices such as regional oil supplies and improved coal burning technology and even wind, geothermal, and solar sources? When patriotic and national emotions are whipped up, nuclear reactors are a stapled amendment to the list. I seriously doubt that either candidate has a clue to the enormous costs involved and the safe disposal of nuclear waste. In the Sciencedebate 2008 questionnaire Barack Obama wrote his answer regarding the energy issue..."A new generation of nuclear electric technologies that address cost, safety, waste disposal, and proliferation risks." That is a costly, tall plan. [John McCain has yet to respond.]

The Boston Globe
THE REPUBLICAN convention was a barren desert of diversity, with the lowest percentage of black delegates in 40 years. Yet this 93 percent white gathering blithely stole from the race riots of the '60s to lustily chant "Drill, baby, drill." Compounding the irony, the first speaker hurling the verbal Molotov cocktail to the crowd was the only African-American the party could dredge up for prime-time, former Maryland lieutenant governor Michael Steele.

The chant continued during confused chuckles by former New York City mayor Rudy Giuliani and through assertive proclamations of laying more pipelines and building more nuclear plants by vice presidential nominee Sarah Palin. Alaska's governor would drill in the Arctic National Wildlife Refuge and opposes protection for polar bears as the ice cap melts. The oil chant rose up one last time when presidential nominee John McCain said, "We will drill new wells offshore and we will drill them now."

Anyone with half a carbon atom in their brain knows it makes no difference that McCain and Palin threw in lame promises to develop wind and solar power. You did not hear, "Blow, baby, blow," or "Let the sun shine in." The looting was on in the Republican ghetto that has told the world for eight years, "Burn, baby, burn."

Most notably, McCain wants 45 new nuclear power plants by 2030. Put aside the obvious fact that no one wants nuclear waste in their backyard. The currently planned national dump in Nevada, Yucca Mountain, is nowhere close to opening because of opposition led by Senate majority leader Harry Reid.

Whatever energy relief could come from nuclear generation, the cost is a mushroom cloud. The Department of Energy recently announced that the estimated cost of dealing with the waste of existing nuclear power plants has risen in the last seven years from a prior guess of $57.5 billion to $96.2 billion. In trying to put his best face on this recalculation, Ward Sproat, the department's civilian nuclear waste director, said, "It's not all taxpayer money." He said 80 percent of the cost will come from nuclear ratepayers. "I would argue pretty strenuously the cost of doing nothing is a lot higher."

Asked whether a surge in new plants would require a new repository, Sproat said, "If there's a major nuclear renaissance with a very large number - you know, a large number of new plants in the future, the second repository may - and I'm underlining the word 'may' - be needed."

The cost of plants is even more of a plume, for both taxpayers and ratepayers. Last week for example, Progress Energy Florida announced a proposed rate increase of 31 percent, in part to pay for two new nuclear reactors, which will cost an estimated $17 billion. The Orlando Sentinel reported that the nuclear project is "an enormous investment likely to bring annual rate hikes for nearly a decade." Florida Power & Light followed up this week with a proposed 7 percent increase, also in part because of expansion and construction of nuclear plants.

The Wall Street Journal has reported that the estimated cost of nuclear reactors has doubled, tripled, or quadrupled in recent years to an average ranging between $5 billion to $12 billion per plant. It quoted an official of Moody's Investors Service as saying such costs "have blown by our highest estimate." According to the Chicago Tribune, Moody's likens the underestimating of nuclear plant costs by utilities to pricing a house without the appliances, furnishings, and landscaping.

The only way to furnish this empty house is through massive taxpayer subsidies. The once-moribund US nuclear industry has been reenergized from $13 billion in federal subsidies and $20.5 billion in loan guarantees in recent years. But the industry wanted $50 billion in guarantees. That ought to be a sign of the risk, let alone the waste. America's ghettos never recovered from "Burn, baby, burn." Between "Drill, baby drill" and "Nuke, baby nuke," earth faces a riot on resources from which the planet may never recover.


Obama responds to science questions
Posted by Mercury at 6:37 AM