Kate McAlpine raps about the LHC 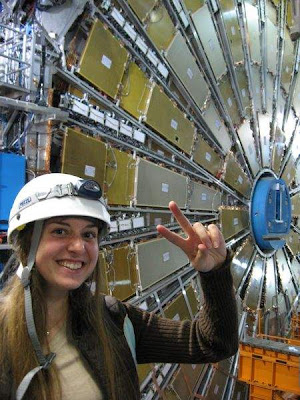 Kate McAlpine
If the naysayers are correct and we are doomed to anhiliation, we might as well enjoy the monemt with the somewhat silly rap tune about the LHC by Kate McAlpine.

Lansing State Journal
In the world of particle physics rap, Kate McAlpine is something like a rising star.

The subject: the Large Hadron Collider at the CERN laboratory near Geneva, Switzerland, the world's largest particle accelerator.

The text: rhyming elucidations of dark matter, anti-matter; the Big Bang and Higgs Boson, all capped off with declarations that, when the collider is turned on Sept. 10, "the things that it discovers will rock you in the head."

"Rap and physics are culturally miles apart," said McAlpine, a 23-year-old Michigan State University graduate and a science writer at CERN, in an e-mail last week, "and I find it amusing to try and throw them together."

Other people apparently find it amusing, too. Even physicists.

"We love the rap, and the science is spot on," said CERN spokesman James Gillies.

"I have to confess that I was skeptical when Katie said she wanted to do this, but when I saw her previous science rapping and the lyrics, I was convinced," he added. "I think you'll find pretty close to unanimity among physicists that it's great."

McAlpine wrote the lyrics on her 40-minute commutes by public transit from Geneva, convinced a friend to lay down beats and finagled permission to film herself and friends dancing in the underground caverns and tunnels where the experiments will take place.

"We were given extra supervision in some locations," McAlpine said. Some lab officials were "most suspicious of 'rappers' in the cavern."

McAlpine actually honed her physics rapping skills at MSU's National Superconducting Cyclotron Laboratory, where she was part of a student research program in the summer of 2006.

The rap she wrote about her Cyclotron Lab experience is based on Eminem's "Lose Yourself" - "mostly for that 'back to the lab again' line," McAlpine said - but she hasn't taken the time to record it. That's the next project.

Michael Thoennessen, associate director of education for the Cyclotron Lab and McAlpine's supervisor when she worked there, lays no claim to helping her develop her technique, though McAlpine says she did rap at least a portion of one research presentation.

But as for the cyclotron rap: "I thought it was just as hilarious as the one she did at CERN," Thoennessen said.

Physicists Rule Out the Production of Dangerous Black Holes at the LHC
Posted by Mercury at 6:59 AM