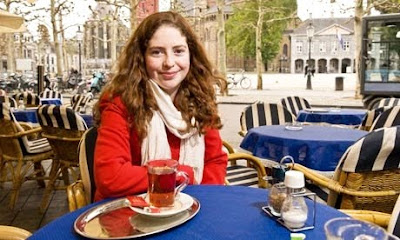 Maastricht University student Theresa Bullock at a cafe in the city.
Not a bad idea but one wonders about the relationship between tuition fees and quality of education.

With UK tuition fees ready to soar as high as £9,000 a year, school-leavers are choosing to go elsewhere

The Observer
Carnival preparations are taking over the Dutch city of Maastricht. Multicoloured ribbons, clown masks and streamers bedeck lamp-posts and windows. Trucks are delivering beer kegs, and kiosks that will sell paper cones of chips and waffles are being set up. Revellers are arriving from miles around.

"I can't wait to see what it's going to be like," said Theresa Bullock, 19, who is in her first year at Maastricht University. She is looking forward to a break, not just from her computer science studies but from a new role that she is starting to adopt – that of an unofficial adviser. With tuition fees about to triple in Britain, more and more UK students are looking to study abroad and Maastricht, with most of its degree and master's courses entirely in English, is at the vanguard of European universities eager to net the best.

Bullock, who blogs on being a student abroad, is being inundated with emails from parents and prospective students. "Most people are worried about the language, but you can live here and never use a word of Dutch," she said.

Bullock, who comes from Redditch, Worcestershire, admits her family were baffled by her decision to study in the Netherlands. "They were a bit worried. I did also apply to Liverpool Uni to keep my mum happy as a backup plan, but I told her Maastricht was closer than Scotland; it's only three to four hours away by train. I knew this was what I wanted." It also helps, she said, that her annual tuition fees are just €1,672 – about £1,450.

The coalition government's plans to triple UK university tuition fees to a maximum of £9,000 a year are about to have a side-effect it didn't bank on – an exodus of students abroad. Maastricht, whose fees are kept low because of Dutch subsidies, is already processing more than 200 applications from the UK, six months before the deadline for the next academic year, and expects many more.

With more than 2,400 courses available in English in the non-English-speaking parts of Europe, the trend will extend beyond the Netherlands. The universities of Valencia and Milan are also seeing a rise in UK interest. It has traditionally been hard for overseas universities to prise undergraduates out of the UK, but last year a record number, 22,000, were studying for degrees abroad. "The Ucas system in the UK is so stressful and so many people don't get through that it seems really unfair. I like that the Dutch give people a second chance," said Bullock. "If you do badly in your A-levels you can still have a go. In England you just won't go to university if you get a C, which is a bit tough when you are so young.

"Financially it's going to make a big difference to me. I have a cousin doing a master's at Manchester who will leave with £40,000 of debt. I hope to leave with none."

With a part-time job sorting post and being within easy distance of Brussels, Düsseldorf and Cologne, Bullock is making the most of student life. "I do feel a lot more European than before," she said. With its cobbled city centre crisscrossed more by bicycles than cars, its open squares lined with trees and tolled over by the bells of its historic churches, Maastricht is already a border town of linguistic diversity. It sits in the odd teardrop in the southern Netherlands that rolls into Belgium and Germany, and is versed in English as well as Dutch, German and French. While it is likely to be the economics that will bring a British invasion here, the only thing mystifying the university is what took them so long.

Professor Teun Dekker, vice-dean of University College, said they had been actively looking to bring in native English-speakers to enhance the faculty for everyone. "The idea of internationalism became the goal of many universities, to maximise the experience for the students. Maastricht has always been keen to follow up on this; it's a very natural idea here because of the geography. British students have always been very reluctant to go abroad for even part of their education and there is this imbalance in the exchange of students.

"Cross-pollination that comes out of an international group of students is very valuable. When you have a lecture-based system it doesn't matter what nationality anyone is, but with our discussion-based learning it's very valuable to have people from different backgrounds. English has been the medium for education here for years, it's embedded.

"The UK higher education market is very stratified and I think parents can have a hard time placing us in the hierarchy. Of course, it has very good universities of its own. Now though, with tuition fee rises, it will be different.

"We love David Cameron," he joked, "His policies are doing a great thing for European integration!"

He and fellow vice-dean, Dr Mark Stout, are passionate about their college and, with 94% employment rates for students within six months of graduation, the results support them.

"Our mission," said Stout, "is to bridge that gap and let UK students and their families know that there is an alternative here. Maastricht is comparable to most Russell Group universities. It's not Oxford but on a level with Edinburgh or St Andrew's. There are so many opportunities here for young, dynamic students who are prepared to dip their toe into the water of an education abroad and say OK, our parents didn't but we can."

A major difference between the Dutch and UK systems is who gets in. In the Netherlands, entry requirements are low to allow everyone a chance. The dropout rate is initially high, then quickly drops.

"In the UK, getting into university is very difficult but staying there is easy," said Dekker. "In Holland, getting in is very easy but staying is difficult. You have a chance but it's down to you to make a success of it. It's a political decision but very democratic. We often find that people who didn't excel at school do excel at university. It's sink or swim once they get here but at least, unlike the UK, we let everyone into the pool."

Both vice-deans emphasise that cheaper fees are not the only plus for Maastricht – a claim backed by John Birrane, 20, a psychology student from Co Mayo, Ireland, who is here for a year. "I came here expecting windmills and marijuana but my course is just cutting edge, great," he said. "All the research papers are hot off the press. I just can't believe how good it is.

"The career grid you're given is a list of Irish universities and the entrance requirements and then it's 'Oh, you want to study abroad? That's a bit revolutionary.' So most English-speaking people don't dream of applying for a European university. But now I'm here, I can't understand why anyone from the UK wouldn't want to come here."

Birrane has enrolled on a Dutch language course and has even bought the obligatory bicycle. "I'm coming back here for my master's," he said.

Geoff Lucas, general secretary of the Headmasters' and Headmistresses' Conference (HMC), an association for heads of the UK's leading public schools, visited Maastricht earlier this year. "In terms of value for money and the quality of the student experience, the high contact education and the career opportunities, it's impressive. Word is most definitely spreading.

"This government's higher education policy is in an utter mess and this is a side-effect they didn't see coming. It will certainly test all their heated rhetoric about how we live in a global economy when our universities suddenly have serious competition."
Posted by Mercury at 5:34 AM

hmmmm.....how do we find these lassies...i have a room to let