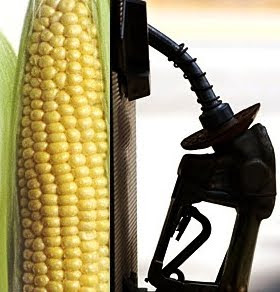 Biofuels aggravate global warming and cause hunger. Why won't the U.S. stop subsidizing them?

Slate
Spectators at February's Daytona 500 in Florida were handed green flags to wave in celebration of the news that the race's stock cars now use gasoline with 15 percent corn-based ethanol. It was the start of a seasonlong television marketing campaign to sell the merits of biofuel to Americans.

On the surface, the self-proclaimed "greening of NASCAR" is merely a transparent (and, one suspects, ill-fated) exercise in "greenwashing" for the sport. But the partnership between a beloved American pastime and the biofuel lobby also marks the latest attempt to sway public opinion in favor of a truly irresponsible policy.

The United States spends about $6 billion a year on federal support for ethanol production through tax credits, tariffs, and other programs. Thanks to this financial assistance, one-sixth of the world's corn supply is burned in American cars. That is enough corn to feed 350 million people for an entire year.

This year, after a particularly bad growing season, we see the results. Global food prices are the highest they have been since the United Nations started tracking them in 1990, pushed up largely by increases in the cost of corn. Despite the strides made recently against malnutrition, millions more people will be undernourished than would have been the case in the absence of official support for biofuels.

We have been here before. In 2007 and 2008, the swift increase in biofuel production caused a food crisis that incited political instability and fueled malnutrition. Developed countries did not learn. Since 2008, ethanol production has increased by 33 percent.

Biofuels were initially championed by environmental campaigners as a silver bullet against global warming. They started to change their minds as a stream of research showed that biofuels from most food crops did not significantly reduce greenhouse gas emissions – and in many cases, caused forests to be destroyed to grow more food, creating more net carbon-dioxide emissions than fossil fuels.

Some green activists supported mandates for biofuel, hoping they would pave the way for next-generation ethanol, which would use non-food plants. That has not happened.

Today, it is difficult to find a single environmentalist who still backs the policy. Even former U.S. Vice President and Nobel laureate Al Gore—who once boasted of casting the deciding vote for ethanol support—calls the policy "a mistake." He now admits that he supported it because he "had a certain fondness for the [corn] farmers in the state of Iowa"—who, not coincidentally, were crucial to his 2000 presidential bid.

It is refreshing that Gore has now changed his view in line with the evidence. But there is a wider lesson. A chorus of voices from the left and right argue against continued government support for biofuel. The problem, as Gore has put it, is that "it's hard once such a program is put in place to deal with the lobbies that keep it going."

Politicians can't stop such rent-seeking behavior. What they can do is craft well-considered policies that maximize social welfare. Unfortunately, when it comes to policies marketed as reining in global warming, protecting the environment, or creating "green jobs," we have a tendency to make hasty decisions that don't pass the test.

Government support for biofuel is only one example of a knee-jerk "green" policy that creates lucrative opportunities for a self-interested group of businesses but does very little to help the planet. Consider the financial support afforded early-generation renewable-energy companies. Germany led the world in putting up solar panels, funded by $75 billion in subsidies. The result? Inefficient, uncompetitive solar technology sitting on rooftops in a fairly cloudy country, delivering a trivial 0.1 percent of Germany's total energy supply, and postponing the effects of global warming by seven hours in 2100.

Given the financial stakes, it is little wonder that alternative-energy companies, "green" investment firms, and biofuel producers are lobbying hard for more government largesse, and marketing their cause directly to the public by highlighting its supposed benefits for the environment, energy security, and even employment—none of which withstand scrutiny. "The NASCAR deal will push American ethanol into the stratosphere," declared Tom Buis, CEO of the ethanol trade association Growth Energy.

At least one group is already sold: presidential contenders. In Iowa last month, possible Republican candidate Newt Gingrich derided "big-city attacks" on ethanol subsidies. And, in what must be music to the industry's ears, an Obama administration official declared that even amid the highest food prices the world has seen, there is "no reason to take the foot off the gas" on biofuel.

In fact, there are millions of reasons—all of them suffering needlessly—to apply the brakes.
Posted by Mercury at 7:04 AM