Do you have a few extra £s for some old star charts? 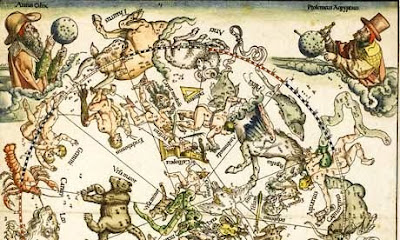 Woodcut prints created by German artist Albrecht Dürer and two astronomers expected to fetch up to £180,000 at Sotheby's sale

guardian.co.uk
The oldest printed star maps in the world, drawn by German Renaissance artist Albrecht Dürer, which show the northern skies teeming with the creatures of the zodiac, are to be sold at a Sotheby's auction in London with an estimate of up to £180,000.

Only a handful of surviving copies are known of the woodcut prints, published in Nuremberg. The charts were a commercial venture by Dürer and two astronomers, the German Conrad Heinfogel and the Viennese Johannes Stabius.

Despite the fantastic creations swirling through the heavens, the charts were also a serious and much-copied scientific undertaking, accurately placing the stars of the 48 constellations identified by the Greek scholar Ptolemy 1,300 years earlier. The southern hemisphere, not yet in 1515 mapped by astronomers, is almost empty in the prints.

The northern map is decorated with an image of Ptolemy, sporting an improbable top hat for second-century Alexandria, along with the Greek, Islamic and Roman astronomers Aratus, Al-Sufi and Marcus Manilius.

Only 10 other examples of the 1515 charts are known, all in academic or museum collections, and only three with contemporary hand colouring such as these.

Their provenance is unknown for centuries before they were bought by the present owner from a French dealer, who kept them for decades at his home.

Severine Nackers, head of Old Master prints at Sotheby's, said they probably survived in such good condition because they were folded in a book and kept away from light. They will be sold on Wednesday 30 March, along with other Dürers and works by Rembrandt, Edvard Munch and Paul Gauguin.
Posted by Mercury at 6:40 AM