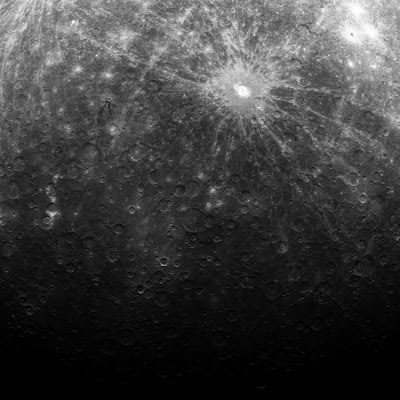 Scientific American
A NASA spacecraft has captured the first-ever image of Mercury taken from orbit around the planet. MESSENGER, which on March 17 became the first space probe to orbit Mercury, the innermost world of the solar system, snapped its first photo of the diminutive, cratered planet at 5:20 A.M. (Eastern Daylight Time) on March 29.

Prior to MESSENGER's arrival at Mercury, only half the planet had ever been seen in any detail. (Mercury's size and proximity to the sun complicate Earth-based observation of the planet.) The spacecraft filled in a number of cartographic gaps in a series of Mercury flybys prior to entering orbit, but even those maneuvers left some terrain uncharted. In MESSENGER's first photo from orbit, for instance, the lower center of the photograph covers a large swath of previously uncharted surface. For comparison, see this mosaic map of the region MESSENGER was targeted to photograph on March 29; note the gaping blank space in the map that the spacecraft has now filled.

NASA plans for MESSENGER, which stands for MErcury Surface, Space ENvironment, GEochemistry, and Ranging, to spend at least a year circling Mercury, charting the planet's surface in detail and investigating its magnetosphere and chemical environment.