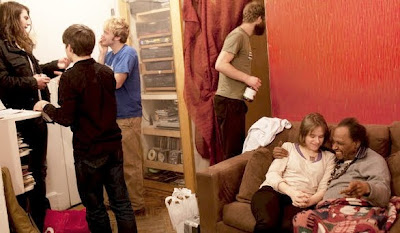 This reminds me of a similar place in my undergraduate days called the Vanguard. Of course it bit the dust too. But the memories remain.

"A Place Where Emotions Became Poetry Is for Sale"

The New York Times
A man who runs a gallery and salon in the East Village that has managed to survive even as the neighborhood’s bohemian past fades recently got some startling news from a visitor.

Why, the visitor asked, was there a large metal sign on the man’s building announcing that it was for sale?

The gallery proprietor, Steve Cannon, who is blind, said he knew nothing about the sign. But he quickly asked a friend to call the real estate agency that had put it up.

The agent said the building was being offered for nearly $3 million, Mr. Cannon said. Furthermore, he added, the agent had told his friend that it could be sold without tenants.

Mr. Cannon, 75, was naturally alarmed by the news. He had sold the three-story federal-style town house on East Third Street between Avenues C and D to its present owner in 2004 believing that he would be able to occupy the second floor for at least a decade.

“I was surprised,” Mr. Cannon said on a recent afternoon as he sat inside his second-floor apartment. “Before that day, I thought everything was cool.”

The news sent shudders through generations of poets, artists, musicians and others, who felt a strong sense of devotion to A Gathering of the Tribes, a gallery and salon in the building, and to Mr. Cannon. A former humanities professor, who taught for 25 years at city university campuses including Hunter College in Manhattan and Medgar Evers College in Brooklyn, Mr. Cannon decided in 1991 to turn the building, which he had bought for $35,000 in 1970, into a salon and open house where practically everybody was welcome.

The people who gather there have held art shows, published a literary magazine and arranged readings in cities around the country. For about the past 15 years, they have also organized a monthlong Charlie Parker festival at the gallery held in conjunction with an annual concert in Tompkins Square Park.

Now, Mr. Cannon and his supporters feel that their cultural pursuits, which were once inspired by the East Village’s energy and grit, may fall victim to the gentrification that has overtaken much of the neighborhood.

Faced with debt in 2004, Mr. Cannon sold the house on East Third Street to a woman named Lorraine Zhang. An agreement between them stipulated that Mr. Cannon could rent the second floor for $1,000 per month through August 2009, with an option to renew the agreement for five years at a monthly rent of $2,200, as long as he provided written notice of his intent to renew six months in advance.

Mr. Cannon said he thought that Ms. Zhang’s accepting of his rent checks since the end of the first lease constituted renewal. Ms. Zhang disagreed, saying Mr. Cannon and the gallery were still in the building only because she had allowed them to stay.

“I don’t want to give him trouble and ask him to move out, but legally I can,” she said.

A listing on the Web site of Marcus & Millichap, the real estate company hired by Ms. Zhang, listed the building for $2.9 million. The site said all four apartments inside were unregulated and added that a buyer could “potentially convert into a single-family town house.”

Mr. Cannon said he was exploring whether he had any legal recourse to oppose the sale in court. At the same time, he said, he would reach out to friends and arts patrons to see whether any of them might be interested in buying the building and turning it into an artists’ residence and cultural center.

Bob Holman, the owner of the Bowery Poetry Club, said the idea behind A Gathering of the Tribes was developed in the late 1980s, when Mr. Cannon and others began holding poetry seminars on the stoop of the East Third Street building. They were inspired by nearby performances at the Nuyorican Poets Cafe, where loud, raucous poetry slams were changing the way the art form was viewed.

“To have this kind of poetry emerge in a world of advertisements and massaged neutral speech was a revelation,” Mr. Holman said. “And Steve lived it.”

Mr. Cannon became a mentor to a group of young poets, Mr. Holman said, spending hours on the stoop, listening to recitations, offering critiques and guidance and helping to shape raw emotion into literature.

After selling the building to Ms. Zhang, Mr. Cannon turned his apartment into a salon, where he fostered the artistic ambitions of younger people searching for a means of expression and a place to be heard.

One such group assembled on a recent Thursday night where they staged performances under the name the Catweazle Club, named after a similar series held in Oxford, England.

An organizer, Cal Folger Day, 23, who called Mr. Cannon “an indefatigable host,” said she preferred to hold events there instead of in a bar or at a theater because she wanted to be in an atmosphere where people gathered primarily to listen to one another, rather than to engage in commerce.

“We are not a moneymaker, however unfortunate, and neither is Steve,” she said. “So we decided to bring all the starving artists together.”

In one room, a few dozen people sat in chairs as a man sang a couple of songs, with his guitar and harmonica. A young woman and her dulcimer followed.

Mr. Cannon sat on the couch in the next room, listening and chatting with some of his young visitors.

“The real idea of Tribes is to be nonexclusive,” he said. “That’s why I always keep the door open to everyone.”
Posted by Mercury at 2:12 PM

notice Mr. Bald wrapped around the young coed...how many of these have i seen come and go, from The Hungry Eye to the poetry slams....i suppose it gives the almost gifted something to do and intellectuals a place to reshape the minuscule world surrounding them...and in the end, a few will have to find something else, don't worry they will find someplace else

Jeeze, that guy does look like some perv from the Village.

I mentioned the Vanguard in my undergraduate days. It was a cool place to be. Not only poetry, but philosophy and somehow someone garnered those rare 16mm art films that were never shown theatrically.

That guy does remind me of someone...hmmmm!