Those rare trees of age

INTERNATIONAL YEAR OF FORESTS
My colleague Tim sent me some information and a photo of the "Homon Sugi" on Japan's Yaku Island. The estimated age of this tree is 7,200 years. This made me wonder what the oldest living things on Earth are. Well, according to Urban Titan, here they are... 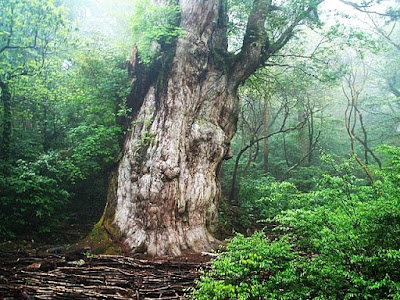 Imagine living for many centuries before the ancient Babylonians even existed, then carrying on through the developments of the Greek and Roman empires, the births of religions like Christianity and Islam right up to the present day, and still being alive to bear witness. Such an organism, which could be the oldest livng thing on the planet, is the Jhomon Sugi tree, of Yakushima in Japan. This awesome living fossil could beas old as 7,200, which would make it the oldest by far. With a girth of 16.4mtrs it could also be as young as 2,170 years. The inner growth rings of the tree are too rotten to be absolutely certain. 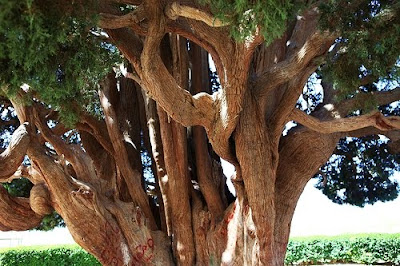 The Sarv-e-Abarkooh is a 4,000 year old Cypress tree located at Abarkooh, in Iran. Also known as the ‘Zoroastrian Sarv’, this holds a special place in the hearts of all Iranians, with strong religious connotations. Another truly ancient example of living tree is the Llangernyw Yew, in Wales. Yew trees are common in cemeteries and known for their longevity but this is an extreme example. 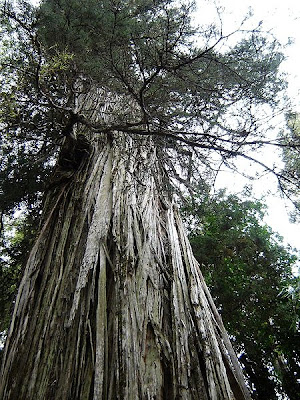 Another tree which is known to have been around for 35million years – the oldest today being a youthful 3,600 years of age – is the Patagonian Cypress, also known as the ‘Alerce’. So valuable was the wood of this tree to the Chilean locals that they used roof shingles made from it as money. 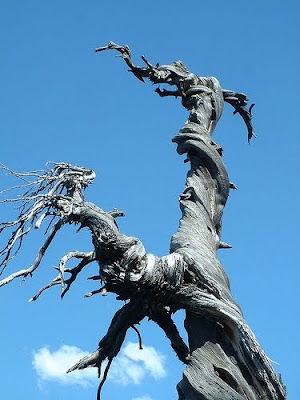 Outside the city of Logan, Utah, USA, you will find The ‘Jardine Juniper’, again the oldest, at 3,200 years, of its kind anywhere in the world. Perhaps one of the most impressive of long-lived tree species is the Giant Sequoia, native to California. These gigantic trees are commonly found to be several thousand years old. Indeed, the ‘Chicago Stump’, felled in 1893 for the World’s Fair, was established by tree-ring count at 3,200 years. 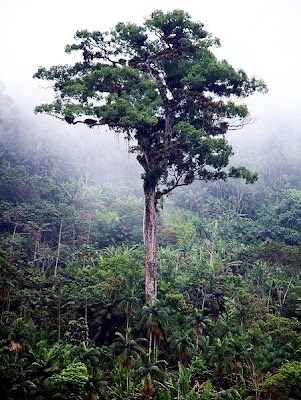 Yet another ancient S. American resident is the ‘Patriarca de Floresta’ tree of Brazil. One of the biggest trees in the Atlantic Forest, there are some old trees in Santa Rita do Passa Quatro and near Petrópolis. This one is thought to be at least 3 000 years old, almost certainly the oldest deciduous tree on the continent. 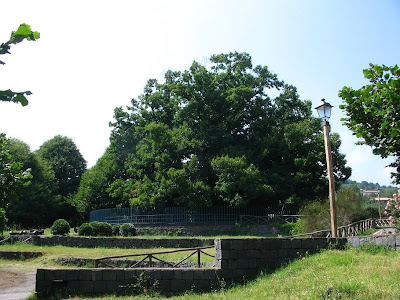 The oldest known Chestnut tree in the world can be found on the Linguaglossa road, in San D’Alfio, on the slopes of Mount Etna in Sicily. This ‘Tree of 100 horses’, as it is known, is indisputably the largest tree od its kind to be found anywhere on the planet, and thought to be somewhere between 2,000 and 4,000 years old. 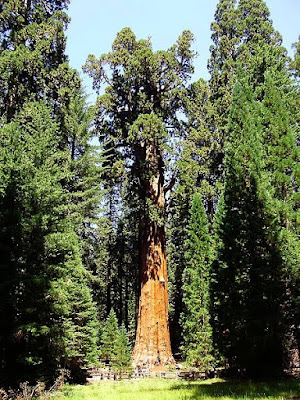 ‘General Sherman’ Giant Sequoia, USA
One of the youngest of these ancient trees is also the biggest in the world by volume of wood contained within it. The ‘General Sherman’, a Giant Sequoia that stands 275ft tall and measures 102ft in circumference at the base. It can be found in the Sequoia National Park. As of 2002, the trunk volume was measured at about 1487 cubic meters. It is believed to be between 2,300 and 2,700 years old.
Posted by Mercury at 12:18 PM

i am glad you started this as i have learned quite a bit researching trees. sad tho what is left of the original forests but...chances are very good they will be here after we have left for that bar in Star Wars