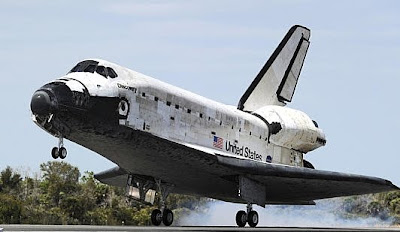 Suitable for printing and framing.

The Christian Science Monitor
Space shuttle Discovery lands at the Kennedy Space Center in Cape Canaveral, Fla., Wednesday, March 9, at 11:59 a.m., finishing a successful mission and ending the 27-year career of the space shuttle, which is destined for a museum.

After 365 days and 148,221,675 million miles in space during 27 years of operation, the space shuttle Discovery ended a storied career Wednesday with brief puffs of smoke, as tires touched the runway at the Kennedy Space Center in Florida.

During its final, 13-day mission, Discovery and its crew delivered a new module to the International Space Station, as well as an external storage platform, a robot to eventually serve as an additional crew member, and tons (literally) of supplies.

The mission went so well that managers added two days to Discovery's docked time at the station to allow shuttle astronauts to help the station crew get ahead on repairs and housecleaning chores – that would otherwise fall to a station crew that, for a period, will drop to three astronauts instead of the usual six.

"Discovery? Houston. Pinto, great job by you and your crew," came the reply.

Later, as the crew stood behind him on the runway, Lindsey told the ground crew and NASA officials who came out to greet the returning astronauts that "it's a pretty bittersweet moment for all of us. As the minutes have passed, I've actually been getting sadder and sadder about this being the last flight."

With 39 missions, Discovery has by all accounts been the workhorse of the shuttle fleet.

It was delivered to the Kennedy Space Center in November 1983 – the third of what was designed to be a four-shuttle fleet – and launched on its first mission the following August.

Discovery lofted the Hubble Space Telescope – itself a workhorse for nearly two generations of astronomers and astrophysicists. Discovery and its crews played a key role in delivering and installing key structural segments of the International Space Station. And after each of two fatal shuttle accidents involving Challenger in 1986 and Columbia in 2003, Discovery put the shuttle program back in business with the first launches following those tragedies.

With the end of this mission, dubbed STS-133 in NASA parlance, the orbiter has ended its flight career in style.

"Discovery launched and came back on this flight ... with absolutely no liens against her, no single system with any problems whatsoever," said Lindsey, a retired US Air Force colonel who has spent more than 6,500 hours flying a range of aircraft. "You think about a vehicle that's 27 years old and been flying for that long. To come back perfect? I have never seen an airplane be able to do that."

Although Discovery is destined to serve as a museum piece, the orbiter still has much to teach NASA, mission managers say.

As ground crews pour through the orbiter to perform their typical post-mission work, unloading experiment samples and other cargo the crew brought back from the space station, they also will be looking at key shuttle components – some of which may not have seen a wrench or screwdriver since the orbiter was built.

They hope to take information about spaceflight's wear and tear and apply the lessons to a new heavy-lift rocket the agency is working on, which will move cargo and crews beyond low-Earth orbit.

Engineers will be looking "at hardware we want to carry to the next vehicle," as designs for a new rocket progress, said Michael Moses, the shuttle program's launch integration manager, during a post-landing briefing.

Indeed, each of the remaining orbiters will undergo the same scrutiny after their final missions, added William Gerstenmaier, NASA's associate administrator for space operations.

Even the shuttles' runway will help preserve memories of 30 years of shuttle operations.

As each orbiter returns from its final mission, technicians will mark the spot where the orbiters' nose wheels come to a complete stop, so a commemorative plaque can be placed there.
Posted by Mercury at 3:40 PM