More on the end of bookstores 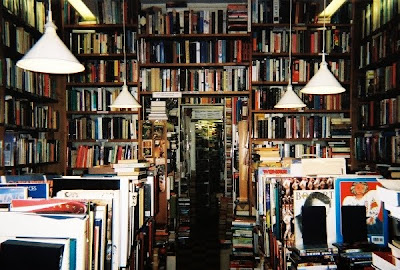 POSP stringer Tim brought this to my attention.

"The end of bookstores"

The New Republic
A few weeks ago, with a small footnote by way of introduction, The New York Times Book Review published revamped best-seller lists that, for the first time, separately reflect the sale of e-books. The new lists were inevitable—e-books made up about 10 percent of book sales in 2010, and that number is rapidly rising. You had to read between the lines to find the real news, but there it was: To the growing list of things that will be extinct in our children's world, we can now add bookstores. Does it surprise us? Should we care?

There were booksellers in ancient Greece and Rome and the medieval Islamic world, but it was not until after the advent of printing that the modern bookstore was born. In sixteenth-century England, a license from the king was needed to print a book, and those books considered distasteful by the monarchy were suppressed; to trade in such outlawed books was a punishable offense, and yet there were booksellers and readers willing to take the risk, and these books were sold and read. The bookseller, in other words, was, from the beginning, an innately independent figure, in spirit if not by law. As the availability and variety of printed books increased, the bookseller became a curator: one who selects, edits, and presents a collection that reflects his tastes. To walk into a modern-day bookstore is a little bit like studying a single photograph out of the infinite number of photographs that cold be taken of the world: It offers the reader a frame. Within that frame, she can decide what she likes and doesn't like, what is for her and not for her. She can browse, selecting this offering and rejecting that, and in this way she can begin to assemble a program of taste and self.

The Internet has co-opted the word “browse” for its own purposes, but it’s worth pointing out the difference between browsing in a virtual realm and browsing in the actual world. Depending on the terms entered, an Internet search engine will usually come up with hundreds, thousands, or millions of hits, which a person can then skate through, clicking when she sees something that most closely echoes her interest. It is a curious quality of the Internet that it can be composed of an unfathomable multitude and, at the same time, almost always deliver to the user the bits that feed her already-held interests and confirm her already-held beliefs. It points to a paradox that is, perhaps, one of the most critical of our time: To have access to everything may be to have nothing in particular.

After all, what good does this access do if we can only find our way back to ourselves, the same selves, the same interests, the same beliefs over and over? Is what we really want to be solidified, or changed? If solidified, then the Internet is well-designed for that need. But, if we wish to be changed, to be challenged and undone, then we need a means of placing ourselves in the path of an accident. For this reason, the plenitude may narrow the mind. Amazon may curate the world for you, but only by sifting through your interests and delivering back to you variations on your well-rehearsed themes: Yes, I do love Handke! Yes, I had been meaning to read that obscure play by Thomas Bernhard! A bookstore, by contrast, asks you to scan the shelves on your way to looking for the thing you had in mind. You go in meaning to buy Hemingway, but you end up with Homer instead. What you think you like or want is not always what you need. A bookstore search inspires serendipity and surprise.

It’s a revealing experiment to put side by side bookstores and the Internet—or even just Google Books, which now offers 15 million of the world’s 130 million unique books. Both the Internet and Google Books strive to assemble the known world. The bookstore, on the other hand, strives to be a microcosm of it, and not just any microcosm but one designed—according to the principles and tastes of a “gatekeeper”—to help us absorb and consider the world itself. That difference is everything. To browse online is to enter into a search that allows one to sail, according to an idiosyncratic route formed out of split-second impulses, across the surface of the world, sometimes stopping to randomly sample the surface, sometimes not. It is only an accelerated form of tourism. To browse in a bookstore, however, is to explore a highly selective and thoughtful collection of the world—thoughtful because hundreds of years of thinkers, writers, critics, teachers, and readers have established the worth of the choices. Their collective wisdom seems superior, for these purposes, to the Web’s “neutrality,” its know-nothing know-everythingness.

The other day I rented Hannah and Her Sisters after having not seen it for many years. I was struck by how many chance meetings and conversations took place in book or record stores. No one would ever turn to Woody Allen for a realistic portrayal of New York, but, all the same, it surprised me that back then there were so many book and record stores to film in. They used to say about New York that, if you get rid of the drug dealers, people will stop using. It makes one wonder if the phrase carries: Get rid of the bookstores, and people will stop reading. Recently, the largest independent bookstore in the country, Powell’s, laid off 31 employees. In a release, the company cited the changes that technology has forced on the book industry. And Borders—which was once a predator upon other, smaller bookshops—has filed for bankruptcy after seeing sales fall by double-digit percentages in 2008, 2009, and in each quarter in 2010.

There are many reasons for the decline of bookstores. Blame the business model of superstores, blame Amazon, blame the shrinking of leisure time, blame a digital age that offers so many bright, quick things, which have crippled our ability for sustained concentration. You can even blame writers, if you want, because you think they no longer produce anything vital to the culture or worth reading. Whatever the case, it is an historical fact that the decline of the bookstore and the rise of the Internet happened simultaneously; one model of the order and presentation of knowledge was toppled and superseded by another. For bookstores, e-books are only the nail in the coffin.

Or are they? Or rather, should we let them be? What, really, is the difference if we can still download all those books we once might have bought in a real-world store? Presumably, once bookstores are gone—and the professional literary critic (those widely and deeply read Edmund Wilsons, Alfred Kazins, and Susan Sontags who once told us not just what books to read but also taught us how to read), no longer considered valuable enough to seriously employ, is completely dead—other “content curators” will rise up in their place to build a bridge between the reader and the books that were meant for her. What’s so terrible about that?

But here we run into a strange misapprehension about digital culture and commerce. The accepted notion that the Internet, as an open-access forum, has disseminated power and influence and opened the door to seemingly endless variety is true in many instances, but not always. If creative copyright laws remain in place, most books will continue to be available only at a price. (If such laws don’t remain in place, most of the future’s great books will not get written.) Merchants will still control the sale of books, and, at least for the foreseeable future, those merchants will be a handful of corporations like Apple, whose “curatorial” decisions are based solely on profitability, their selections determined by the best-seller list, which is itself determined by corporations like Apple, so that the whole thing takes on the form of a snake eating itself.

Looking over these newly expanded and increasingly desperate best-seller lists—to hardcover (fiction and nonfiction), paperback (trade fiction, mass-market fiction, and nonfiction), and a number of other specialized lists (advice, how-to, and miscellaneous; children’s—further divided into picture books, chapter books, paperbacks, and series) have now been added a list of e-book sales, for a total of six whole pages of print—one can’t help but wonder why. Why do we care about best-sellers? Why does The New York Times Book Review, one of the last book-review sections of a national newspaper left in this country, dedicate six pages that might otherwise be given over to reflection on books to their commercial ranking instead?

If between the lines of those new best-seller lists is an obituary for bookstores, there is also one for The New York Times Book Review itself: Soon all that might be left of it is a bundle of best-seller lists. It is not the notion of a best-seller list that rankles: Commerce is a part of literary life, and the commercial distinction of a serious book—not everything that sells well is dross—lifts the spirits and the bottom lines of publishers and writers. But six pages of Dow Jones-like charts? Why this obsession with the money side, even while everyone agrees that salability has little relationship to quality? The independent spirit of the bookstore is, at its best, a much-needed bulwark against this obsession.

Yes, the technology is real, and, yes, e-books will exist—but why to the exclusion of books and bookstores? Is convenience really the highest American value? When you download an e-book, it is worth stopping to consider what you are choosing, why, and what your choice means. If enough people stop taking their business to bookstores, bookstores—all bookstores—will close. And that, in turn, will threaten a set of values that has been with us for as long as we have had books.
Posted by Mercury at 5:52 PM