What humans will do to hide an ailment...Modigliani 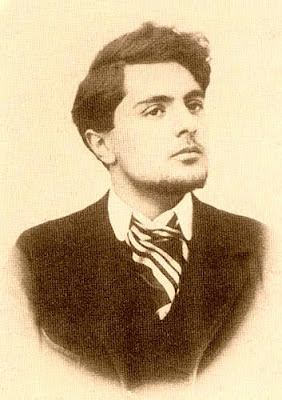 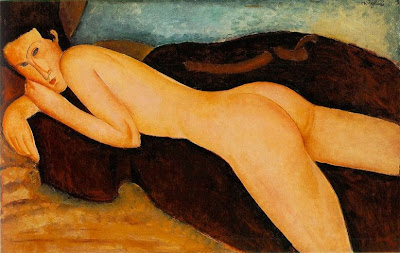 "The Misunderstood Death of Modigliani"

The New York Times
With his milky skin and sleepy eyes, Amedeo Modigliani was one of modern art’s fabled beauties. His life was box-office gold, a classic mortal tale of squalor and salvation. An artist-genius sinks under the weight of poverty, illness and addiction, dies at 35, leaving behind ruined lives — his distraught mistress kills herself and their unborn child — and a body of hugely popular art.

Is the story true? Only up to a point, and it’s what lies beyond that point that interests Meryle Secrest in her new biography, “Modigliani: A Life.” She lets basic facts stand — privation, illness, chemicals — but recasts the artist’s character from dissolute victim to active performer, one who controlled the way his life would be viewed by his contemporaries, and by ­history.

Modigliani was born in 1884 in Livorno, Italy, to a Sephardic Jewish line of intellectual aristocrats — they traced their lineage to Spinoza — and fiscal bunglers. Although by the time he came along family fortunes had long since evaporated, he tended to carry himself like a prince. And the experience of having survived a series of childhood health crises, including tuberculosis, only increased his sense of exceptionalism.

Unsurprisingly, he viewed artists as privileged beings. At 17, he wrote that as a species they had “different rights, different values than do normal, ordinary people because we have different needs which put us — it has to be said and you must believe it — above their moral standards.” Many adolescents play with such ideas. Modigliani went on to live them.

He went to art school briefly but ended up being largely self-taught, and gave himself a good education. He had an avid and eclectic eye, and at an early age he was absorbing Cézanne, African sculpture and Italian Renaissance painting, with Botti­celli and a school of exquisitely stylized Sienese religious artists as ­influences.

In 1906, he moved to Paris, where he staged rather a grand entrance. While most young artists new on the scene took what quarters they could find, he set himself up in a good hotel and dressed like a dandy. The impression he gave of enjoying independent means was at that point not entirely false. An uncle who had had some financial luck left him a modest inheritance. And even when that ran out, Modigliani maintained appearances.

A contemporary, the sculptor Ossip Zad­kine, described him as looking like “a young god disguised as a workman out in his Sunday best.” But the days of hotel living were soon over, and he took to moving from one location to another in the artists’ quarters of Montmartre and Montparnasse, finding support where he could.

Sometimes it came in sustained relationships with women like the British journalist and poet Beatrice Hastings. Hastings, under the name Alice Morning, wrote a running account of the Parisian art scene for an avant-garde journal called The New Age. She had a caregiver’s temperament (she collected stray animals and nursed wounded wasps back to health) and money she didn’t mind sharing, and she liked to get high. She was everything he needed.

Secrest, whose previous biographical subjects include Salvador Dalí and Frank Lloyd Wright, is clearly intrigued by Has­tings and gives her considerable space. In general, the book is at its most captivating in its extended accounts of people, places and events surrounding Modigliani. Along with a deft capsule biography of Hastings, we get evocative portraits of two other of Modigliani’s ­longish-term lovers, the Russian poet Anna Akhmatova and the young Jeanne Hébuterne, with whom he was living when he died, and of his formidably intelligent and protective mother, Eugénie Garsin-Modigliani.

In addition, Secrest offers vividly detailed accounts of Parisian bohemia, as in her description of the louche goings-on at the home of the art collector Paul Alexandre. Alexandre, a wealthy physician drawn to the romance of the low-rent life, leased a crumbling 12-room mansion, scheduled for demolition by the city, and turned it into an emergency studio and living space for artists. He also lived on the premises, and Modigliani was one of many who came to dine at his table, crash on his floor and participate in boisterous parties and “pagan dances” fueled by drugs, many supplied by Alexandre ­himself.

In art circles, hashish, cocaine and opium were as common as wine. And as time went on, people who knew Modigliani commented on his increasing and excessive use of such substances, often basing their observation on changes in his appearance (by the time he reached his 30s he was losing his teeth) and on episodes of aggressive public hostility.

It is exactly on the subject of Modigliani’s reputed self-destructiveness that the revisionist crux of Secrest’s book lies. She is at pains to dispel the idea that a descent, sometimes depicted as willful, into alcoholism and drug addiction was the primary cause of his decline and death at such an early age. Rather, she says, he consciously used intoxicants as a cover to hide a “great secret,” that being the recurrence of his tuberculosis. In remission since childhood, it now returned full-blown, accompanied by symptoms like spasmodic coughing, stretches of lassitude and bouts of erratic behavior.

Secrest suggests that Modigliani, terrified of the social ostracism that would result if he were known to have the highly contagious disease, deliberately fostered a reputation as an alcoholic and addict to prevent detection. This cover allowed him to freely drink the wine that soothed his coughing, use the drugs that gave him energy to work — his output of paintings surged in his last years — and pass off as drunk and disorderly any irritable or violent outbursts.

It has long been accepted among art historians that tubercular meningitis was the immediate cause of Modigliani’s death, and Secrest doesn’t claim to bring fresh information to this medical history. What she clearly hopes to do, though, is replace the popular myth of the crash-and-burn genius who created art despite himself with the image of an artist who perceived his fate and took calculated steps to prolong and protect his life.

The degree to which this revised image is valid remains a question. Whatever gloss one puts on the facts, the artist’s chemical dependence seems undeniable, and, in any case, in our 12-step age doesn’t carry the moral stigma, or glamour, that it once did. But the very idea of someone keeping quiet about a lethal and contagious disease raises serious ethical issues. Did he ever warn his friends, and his countless lovers, about their risk of infection from him? We have no evidence one way or the other.

But then, as Secrest repeatedly acknowledges, much about Modigliani’s life and personality is guesswork. One reason the book’s portraits of secondary players feel as solid and rich as they do is that the figure they surround is so elusive. Firsthand descriptions of Modigliani’s character are wildly contradictory, as if each friend had seen a different facet of his personality, a different performance.

The English artist C. R. W. Nevinson, who shared a studio with him, remembered him as “kind, constant, correct and considerate.” Paul Guillaume, one of his dealers, described him as “all charm, all impulsiveness, all disdain.” The writer Max Jacob, who was very much part of Modigliani’s bohemian crowd, called him “the most unpleasant man I knew. Proud, angry, insensitive, wicked.”

What remains concrete is, of course, his art. The book gives a standard account of its development, as Modigliani moved from painting to sculpture and finally back to painting again, with the well-known portraits and sensation-causing nudes — the Parisian police reacted with alarm to the depiction of pubic hair — that he turned out in quantity in the years before his death in 1920.

But even his art is slippery. It’s modernist and backward-looking, rigorous and sentimental, often bland but with a distinctive, instantly recognizable, easily imitated look. Within his lifetime, fake Mo­diglianis began appearing, and have flooded the market since. There’s no consensus about historical status. Secrest holds his work in higher esteem than I do. Is it ­really true that “Modigliani’s self-­imposed challenge, to see how far he could venture into abstraction without ending in either anonymity or caricature, must be one of the most difficult any artist since the Renaissance has attempted”? I would not credit him with such innovation. When, toward the end of his career, he saw new work by Picasso and Braque and lamented, “I am 10 years behind them,” he was absolutely right.

But critical analysis of the work is not Secrest’s brief. Biographical inquiry is, and when there is substantial matter to draw upon, she is eloquent. She takes us on a fascinating, up-to-the-present tour of the artist’s posthumous history in the hands of other biographers and historians, and is particularly gripping in her description of the end of his life.

In 1916, he met Hébuterne, who, still a teenager, had led a sheltered life in a conservative upper-middle-class family. For a while their relationship seemed to steady him. They lived together and had a child. He found a new dealer and was getting commissions. But his disease and addiction, in whatever combination, were well advanced, and he came to treat Hébuterne abusively. He alternately ridiculed and ignored her, and slept with other women. He promised to marry her but never did.

She was eight months pregnant when she jumped from a sixth-floor window two days after he died. Her mortified family kept the interment private. Modigliani’s funeral, by contrast, was a public, princely affair, thanks to the efforts of his art-world friends. He was buried among the cultural elite in the celebrity cemetery of Père Lachaise. His art was already on its way to immense popularity. The romantic legend of a star-crossed life was in place.

Secrest’s book both preserves and alters that legend. Modigliani’s story is by far the most interesting thing about him. It is certainly the most complex thing, and she lets the complexity unfold in complicated ways, probing it with a historian’s eye, dramatizing it with an advocate’s passion.

[Holland Cotter, an art critic for The Times, won the Pulitzer Prize for criticism in 2009.] 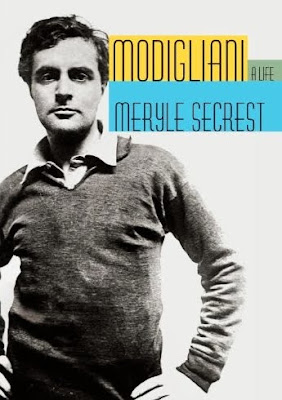