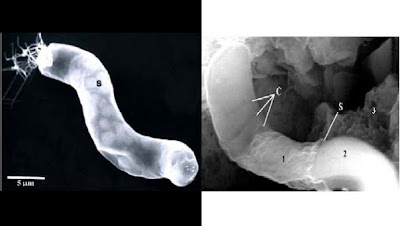 A photograph taken through a scanning electron microscope of a CI1 meteorite (right) is similar in size and overall structure to the giant bacterium Titanospirillum velox (left), an organism found here on planet Earth, a NASA scientist said.
"Alien Life in Meteorites: 'Remarkable Achievement' or 'Garbage'?"

But is the work a "remarkable achievement," as one scientist put it? Or in the words of another, simply "garbage"?

Dr. Richard B. Hoover, an astrobiologist with NASA’s Marshall Space Flight Center, is convinced that he has found fossils within an extremely rare class of meteorites, called CI1 carbonaceous chondrites. He published his latest findings in the March edition of the online Journal of Cosmology -- research that suggests we are not alone in the universe, he told FoxNews.com.

“I interpret it as indicating that life is more broadly distributed than restricted strictly to the planet Earth,” Hoover said. “This field of study has just barely been touched -- because quite frankly, a great many scientist would say that this is impossible.”

Expecting controversy, the journal issued personal invitations to 100 scientists asking them to weigh in on the finding.

Now the journal itself has become the source of controversy.

On Monday, a NASA statement by Paul Hertz, chief scientist in the science division, said Hoover failed to advise the agency he had submitted the paper to the Journal of Cosmology -- and that the article failed to get published in a more established peer-reviewed journal.

Others point to a history of "out there" science stories, and note that the Journal's website is amateurish. Blogger and University of Minnesota biologist PZ Myers called it "the ginned-up website of a small group of crank academics."

"The ad hominem attacks and complaints by those [that] say Dr. Hoover's article should have been published in these other periodicals, and not JOC, are just sour grapes and should not be taken seriously," she Tao said.

He claimed that "no commentary has pointed out any major flaws in the data." Many scientists have indeed voiced concerns, however, just not to the Journal itself -- despite the open call for discussion.

David Morrison, senior scientist at the NASA Astrobiology Institute at Ames Research Center, told MSNBC he felt the choice of scientific journal was enough to call the report into question.

"Extraordinary claims require extraordinary evidence. At a bare minimum this would require publication in a prestigious peer-refereed scientific journal -- which this is not."

"Perhaps the publication came out too soon; more appropriate would have been on April 1," Morrison added.

Many scientists and writers have referenced the earlier work in this field, and similar claims of life in meteorites -- both the 1960s claims by Fordham University chemist Bartholomew Nagy as well as earlier claims by Dr. Hoover made in 2004 and 2007.

"While we value the free exchange of ideas, data, and information as part of scientific and technical inquiry, NASA cannot stand behind or support a scientific claim unless it has been peer-reviewed or thoroughly examined by other qualified experts," Mr Hertz said.

From the Journal of Cosmology...

Environmental (ESEM) and Field Emission Scanning Electron Microscopy (FESEM) investigations of the internal surfaces of the CI1 Carbonaceous Meteorites have yielded images of large complex filaments. The filaments have been observed to be embedded in freshly fractured internal surfaces of the stones. They exhibit features (e.g., the size and size ranges of the internal cells and their location and arrangement within sheaths) that are diagnostic of known genera and species of trichomic cyanobacteria and other trichomic prokaryotes such as the filamentous sulfur bacteria. ESEM and FESEM studies of living and fossil cyanobacteria show similar features in uniseriate and multiseriate, branched or unbranched, isodiametric or tapered, polarized or unpolarized filaments with trichomes encased within thin or thick external sheaths. Filaments found in the CI1 meteorites have also been detected that exhibit structures consistent with the specialized cells and structures used by cyanobacteria for reproduction (baeocytes, akinetes and hormogonia), nitrogen fixation (basal, intercalary or apical heterocysts) and attachment or motility (fimbriae). Energy dispersive X-ray Spectroscopy (EDS) studies indicate that the meteorite filaments are typically carbon rich sheaths infilled with magnesium sulfate and other minerals characteristic of the CI1 carbonaceous meteorites. The size, structure, detailed morphological characteristics and chemical compositions of the meteorite filaments are not consistent with known species of minerals. The nitrogen content of the meteorite filaments are almost always below the detection limit of the EDS detector. EDS analysis of terrestrial minerals and biological materials (e.g., fibrous epsomite, filamentous cyanobacteria; mummy and mammoth hair/tissues, and fossils of cyanobacteria, trilobites, insects in amber) indicate that nitrogen remains detectable in biological materials for thousands of years but is undetectable in the ancient fossils. These studies have led to the conclusion that the filaments found in the CI1 carbonaceous meteorites are indigenous fossils rather than modern terrestrial biological contaminants that entered the meteorites after arrival on Earth. The ?13C and D/H content of amino acids and other organics found in these stones are shown to be consistent with the interpretation that comets represent the parent bodies of the CI1 carbonaceous meteorites. The implications of the detection of fossils of cyanobacteria in the CI1 meteorites to the possibility of life on comets, Europa and Enceladus are discussed.

"Fossils of Cyanobacteria in CI1 Carbonaceous Meteorites: Implications to Life on Comets, Europa, and Enceladus" by Richard B. Hoover

A NASA researcher says he has found fossil bacteria in meteorites, but even his employer declines to stand behind that claim.

Los Angeles Times
A report claiming to find remnants of alien life in meteorites has been broadly dismissed by scientists after its publication Friday in an eccentric online journal.

The report was written by Richard Hoover, an engineer at NASA's Marshall Space Flight Center in Huntsville, Ala.. He had sliced open a couple of small meteorites, looked at them under a microscope and seen what he thought were the fossils of tiny bacteria called cyanobacteria.

Hoover wrote his report, concluding that life is common throughout the universe. He submitted a paper to the Journal of Astrobiology, which rejected it.

Hoover then sent his paper to the online Journal of Cosmology, which promotes the idea that life on Earth came from outer space. A report by Fox News on the paper triggered a meteor storm of publicity over the weekend followed quickly by derision by mainstream scientists.

NASA has distanced itself from Hoover's work. In an unusual step Monday, Paul Hertz, chief scientist of NASA's science mission directorate, issued a statement saying, among other things, that "NASA cannot stand behind or support a scientific claim unless it has been peer-reviewed or thoroughly examined by other qualified experts.... NASA was unaware of the recent submission of the paper to the Journal of Cosmology or of the paper's subsequent publication."

The Journal of Cosmology is a 2-year-old publication developed by Rudy Schild of the Harvard-Smithsonian Center for Astrophysics that has unabashedly promoted the thesis that life exists throughout the universe and was brought to Earth from elsewhere. The journal has published just 13 issues and, in a news release Monday, said it would cease publication in May, "killed by thieves and crooks" at the journal Science and other subscription-based periodicals, whom it has accused of stifling its ability to distribute news.

The Journal of Cosmology claims to be peer-reviewed. In this case, the journal's editors said it had sent a copy of Hoover's article to 100 prominent scientists for critiques and would publish them as they come in. In normal scientific publishing, peer review is conducted before a paper is published to ensure accuracy.

The assessment of scientists, for the main part, has been harsh. "I'm surprised anyone is granting it any credibility at all," wrote blogger and biologist Paul Z. Myers of the University of Minnesota.

"Move along folks. There's nothing to see here," wrote Rosie Redfield, a microbiologist at the University of British Columbia, saying that it is easy to find structures in nature that appear similar to bacteria.

"This appears to be science by wishful thinking," Redfield said in a telephone interview.

Hoover has not responded to media requests for interviews.

Others said that even if the traces Hoover spotted in the meteorite should prove to be bacteria, it would be difficult to rule out contamination.

This is not the first time that researchers have claimed to find fossils in a meteorite. In 1996, a NASA researcher — this time with the agency's imprimatur — said he had found fossil bacteria in a meteorite that had been blasted off the surface of Mars. The report, which was published in the journal Science, was featured on the cover of Time magazine and was trumpeted by the White House.

Eventually, however, most scientists concluded that what researchers had seen were merely rock formations that looked like fossils.

Last year, NASA-sponsored researchers said they had discovered that certain bacteria in Mono Lake in California could incorporate arsenic into their DNA in place of phosphorus, arguing that the finding indicated the possibility of unusual life forms in space. That conclusion also was derided by other scientists.
Posted by Mercury at 4:43 PM