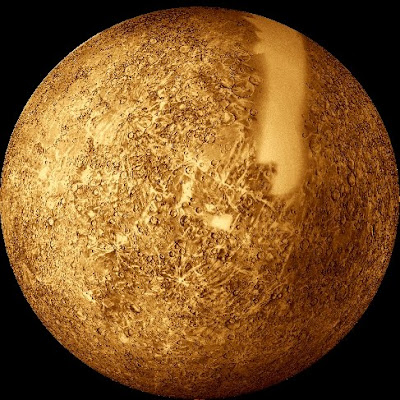 Despite the world's bad news recently, here is some good news from NASA.

Mission managers at the Johns Hopkins University Applied Physics Lab in Maryland will put the brakes on the NASA spacecraft so it can begin orbiting the closest planet to the sun. If successful, Messenger will beam at least a year's worth of images and other data back to Earth.

Baltimore Sun
Fifteen years of planning and 6 1/2 years of maneuvering in space will all come down to one moment Thursday as mission managers try to slip NASA's Messenger spacecraft into orbit around Mercury.

The braking operation, playing out 96 million miles from Earth, will have to slow the desk-size planetary probe by 1,929 mph and ease it into a polar orbit around the planet closest to the sun.

Failure will leave Messenger's managers at the Johns Hopkins University Applied Physics Lab with a fuel tank less than 10% full and limited options for recovery. And that would put the primary goal of the $446-million mission at risk.

But success will open the door to at least a year of scientific discovery, yielding close-up, high-definition images, maps and data from a planet that until now has been observed only from Earth or during high-speed flybys. The earlier visits were made by Mariner 10 in 1974 and 1975 and by Messenger in 2008 and 2009.

"The flybys have been wonderful, but they're really dress rehearsals to what this mission was designed to do," said Sean Solomon of the Carnegie Institution in Washington, the mission's principal investigator.

"Mercury has been comparatively unexplored considering its proximity in our solar system," he said. "It's also a special place by virtue of being the planet closest to the sun."

Orbital insertion begins at 2 p.m. Pacific time Thursday, when NASA will turn its Deep Space Network radio antennas on Messenger to help track the spacecraft and monitor its progress.

At 5:42 p.m., the craft will be turned to firing position, and 30 minutes later its largest rocket engine will begin a 15-minute burn — twice as long as any since Messenger's launch.

If all goes well, Messenger will move into a lopsided elliptical orbit that will take it as close as 120 miles from Mercury's surface and as far away as 9,300 miles.

Engineers and scientists at APL's mission control center in Laurel, Md., will receive tracking data in real time, and hope to hear from Messenger by 6:30 p.m.

The first images from the spacecraft are not expected for another two weeks, after engineers have checked out and turned on all seven of Messenger's cameras and other instruments.

Since Messenger was launched in 2004, it has flown a dozen orbits around the sun, gradually tightening its path, resulting in a flyby of Earth once and of Venus twice en route to Mercury.

Once in Mercury's orbit, Messenger will take high-resolution images of the planet's surface in visible, ultraviolet and infrared wavelengths. It will conduct detailed laser ranging studies, study Mercury's gravitational field, magnetic field and the charged-particle space environment the planet is moving through.
Posted by Mercury at 6:07 PM