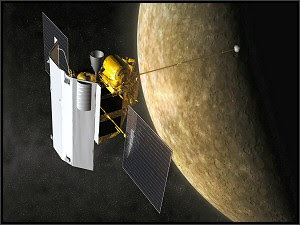 "The Littlest Planet Gets a Close-Up Look"

Time
It took six years and six gravity assists from three different planets to get there, but at a little after 9 p.m. Eastern time on Thursday, March 17, NASA's Messenger spacecraft finally settled into orbit around the small, scorched planet Mercury. Other space probes have flown by Mercury in the past, hastily snapping pictures and taking measurements as they've gone — Mariner 10 was the first, back in the 1970s, and Messenger itself did several flybys itself in 2008 and '09 to get into position. But now, for the first time, a spacecraft will observe Mercury around the clock for at least a year — and even longer if its instruments hold out.

The goal is to unravel some of the mysteries of this strange little world. Mercury is the innermost of the planets, some three times as close to the Sun as Earth is, which explains why its day side hovers at about 840°F (450°C). There's decided relief at night, when the mercury (so to speak) drops to a brisk -346°F (-210°C). But that's not much consolation: the planet rotates so agonizingly slowly that days on Mercury last more than 59 times as long as they do on Earth. It takes the planet only 88 days to whirl around the sun, though, so a Mercurian day lasts about three-quarters of the Mercurian year. Mercury is relatively tiny too: it's only about twice as big in diameter as our moon, and it's actually smaller than Jupiter's moon Ganymede and Saturn's Titan — although Mercury could still beat up Pluto, which is only half its size.

All of this has been well known for years. There's a slew of questions, however, that remain unanswered, with Messenger designed to figure them out. Why, for example, is Mercury so much denser than Earth, Venus and Mars? Scientists know the basic reason: Mercury has less rock and a higher percentage of iron than the other planets, and iron is denser than rock. But how did Mercury end up that way? It may have formed from an unusually iron-rich part of the primordial cloud that gave birth to all the planets, or it may have had a normal rocky shell that got blasted or fried off. Messenger's analysis of the surface rock, and of the gravity profile of the core, could help explain.

Another, more tantalizing, question is whether there could be ice hiding in craters at Mercury's poles. Radar soundings taken from Earth show that there's something highly reflective inside, and because the crater floors are in perpetual shadow, it's cold enough for ice to exist. (Mercury has no atmosphere to speak of, so there's no way for heat to circulate from the hot regions into the craters.) Messenger's earlier flybys didn't get a good look, but the spacecraft's neutron detectors will seek signs of hydrogen — the H in H2O — which would suggest it might be ice.

Yet another longstanding mystery is why Mercury has a magnetic field. In theory, you need molten iron in the core to generate one, but Mercury is so small, its core should have long since solidified. Messenger's onboard magnetometer could help sort that one out.

And there's plenty more: Messenger (which, in true NASA fashion, isn't just a name; it's a cleverish acronym for "Mercury Surface, Space Environment, Geochemistry and Ranging," which is why the name is properly written in all capitals) carries no fewer than seven different instruments, including high-resolution cameras that will map just about every inch of the planet in extraordinary detail, picking out objects as small as 60 ft. (18 m) across. With all of that electronic firepower, the probe will almost certainly answer many of the outstanding questions about this smallest of planets — the smallest, that is, now that Pluto is out of the running.

But anyone who follows astronomy knows that there's an important rule in space exploration: Whenever you train a new, more powerful set of instruments on a celestial object, whether it's a nearby planet or a galaxy halfway across the universe, you're sure to raise more questions than you answer. That, space watchers know, is when the fun really begins.
Posted by Mercury at 6:47 AM