The "GOO" of life 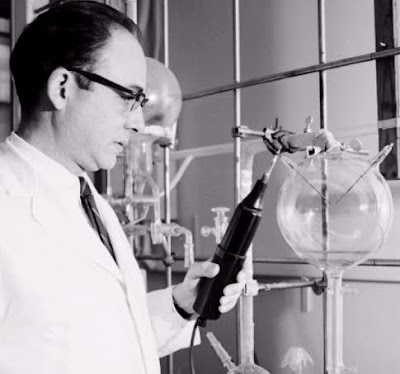 Stanley Miller in his UC San Diego lab in 1970

Time
Jeffrey Bada was comparing notes with his colleague Antonio Lazcano a couple of years ago, when something brought him up short. The two chemists, one from the U.S. and one from Mexico, had met in Texas to give a series of talks on prebiotic chemistry — the substances that gave rise to life on earth — when Lazcano pulled up a slide showing a vial with gunky residue spilling out.

"Where did this come from?" Bada asked. "Stanley gave it to me," replied Lazcano. "He saved it from his original experiments." Recalls Bada: "It just blew me away."

With good reason. Stanley was Stanley Miller, whose experiments with Harold Urey in the 1950s were the first serious attempt to figure out how life on earth began. By passing sparks through a brew of methane, ammonia, water vapor and hydrogen — a mixture thought at the time to be similar to earth's primordial atmosphere — Miller and his collaborator, Urey, both chemists at the University of Chicago, created amino acids, the building blocks of proteins. It later turned out that their reconstructed atmosphere was probably wrong, and the experiment had never been repeated with a more accurate mixture. Or so everyone thought.

But everyone was wrong, as a serendipitous turn of events would soon show. Lazcano was not the only one to have received some scientific memorabilia from the long-ago experiments. After Miller left Chicago, he worked alongside Bada at the Scripps Institution of Oceanography, in San Diego. When Miller died in 2007, Bada inherited boxes full of his lab paraphernalia. He'd never poked around in them much — but after the encounter with Lazcano, says Bada: "I realized I must have this sample in a box, and I've got to find that box."

It took all of 15 minutes. "It was just a stunning experience," Bada says. "All these little boxes full of equipment and vials from all Stanley's original experiments. It was an unbelievable collection of organic compounds and amino acids." And most of the work, which took place in the years following Miller's landmark experiment with Urey, had never been described in the scientific literature.

That's starting to change, though. In 2008, Bada, along with Lazcano, of the National Autonomous University of Mexico, and several others reran some of Miller's experiments using his original apparatus, and published the results in the journal Science. Now a second paper has come out in Proceedings of the National Academy of Sciences, which amplifies on that result. What makes both studies so potentially important is that they're based on a more realistic picture of conditions on early earth.

In particular, they suggest to Bada that life might have arisen, not in the "warm little pool" that Darwin himself once guessed, but in the violent environs of volcanic eruptions. "We know that the early earth had few continents, but it had a lot of volcanoes, and they were hotter and more powerful than we're used to. They would have been belching hydrogen sulfide and other gases."

Volcanic plumes would also have triggered powerful discharges of lightning from the skies, as they do today. And that, says Bada, is essentially what Miller's unpublished experiments showed. One piece of apparatus that survives in Bada's collection is configured in a way that suggests Miller was working with hydrogen sulfide and hot steam. And sure enough, when the scientists analyzed Miller's original samples that came from that particular setup, they found a wide assortment of amino acids, including some that had never been made before. "Stanley couldn't have detected them with the crude analysis available to him at the time," says Bada.

Intriguingly, this relatively new take on prelife chemistry may fit in nicely with evidence from outer space as well. Carbon-rich meteorites have long been known to have amino acids inside them (this is a far cry, by the way, from recent claims about meteorites containing bacteria, which nobody takes seriously). We know, says Bada, that before the planets formed, the cloud of gas and dust surrounding the newborn sun was full of these same gases and also full of electricity — essentially, interplanetary lightning. "It was probably converting these simple gases into amino acids," says Bada.

So is this finally the grand unified theory of how life began? Not quite. Other scientists still think that first step happened at the mouths of so-called hydrothermal vents, at the bottom of the sea. And even if everyone finally agrees on where the amino acids originally came from, they're a long way from actual life forms.

"The big action right now," says Bada, "is how go from these simple molecules to self-replicating molecules. It's challenging science. But it's just a matter of time," he believes, "before we figure out some candidate."

Sulfur’s presence makes it possible to synthesize a greater variety of amino acids — the molecules that link to form protein chains — and gives nascent life a larger palette of chemicals from which to select.

“When you are analyzing old samples, you always hope in the back of your mind that you are going to find something really cool,” says primary author Eric Parker, a graduate student now at Georgia Tech. “It was a pleasant surprise to see such a large array of different amino acids and amines.”

In Miller’s classic experiments, dating from the early 1950s, electricity — standing in for lightning — zaps a few basic chemicals, water, methane, hydrogen and ammonia, to simulate the atmospheric conditions on Earth before life began. Miller became famous for showing that simple chemicals could be combined with relative ease to form some of the building blocks of life.

This 1958 experiment, originally unpublished and revisited March 21 in the Proceedings of the National Academy of Sciences, marked Miller’s first inclusion of hydrogen sulfide, the chemical that makes rotten eggs smell and a prime component of volcanic gas emissions, in the primordial mix.

Using modern chemical analysis techniques, Parker’s team found 23 amino acids, seven other compounds and four amines, a breakdown product of amino acids. This was far more than typical analysis of past samples, which yielded five to 10 amino acids. Several of the amino acids were synthesized for the first time, including methionine, a required building block for many proteins in animals, plants and fungi.

The newly identified collection of amino acids is also similar to those found in meteorites, meaning sulfur may have help assemble life’s ingredients off this planet, as well as on.

Sandra Pizzarello, an Arizona State University chemist who was not involved with the study, agreed with Parker’s chemical detective work. She noted, however, that all experiments seeking to synthesize prebiotic chemicals are limited.

Earth’s early atmospheric conditions aren’t known, and the reactions in this experiment could only have happened near a source of sulfur. On a primordial Earth, that would have meant volcanoes. Whereas Miller originally focused on chemical reactions in the atmosphere, the primordial soup may have gathered in a volcanic bowl.

Volcanic origins were suggested by a 2008 reanalysis of another forgotten Miller experiment conducted by Jim Cleaves, a geochemist at the Carnegie Institution of Washington, and Scripps Institute of Oceanography biochemist Jeffrey Bada. Both are former students of Miller, and plan to revisit more of his old experiments.

“Miller was a real packrat. He didn’t throw anything out,” said Cleaves, Miller’s final lab student and inheritor of the lab. “Sitting on the shelf was this box, I thought, ‘I don’t know what these are, but I can’t bear to throw them out!’”
Posted by Mercury at 7:42 AM