Remedial educational costs and who is at fault 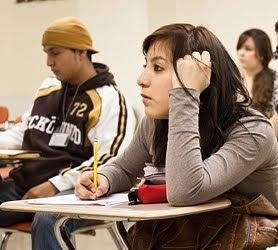 It is obvious that the core of the problem lies at the high school level...it has been a problem for years and probably won't get any better.

The New York Times
The City University of New York has long spent much of its energy and resources just teaching new students what they need to begin taking college-level courses.

But that tide of remedial students has now swelled so large that the university’s six community colleges — like other two-year schools across the country — are having to rethink what and how they teach, even as they reel from steep cuts in state and local aid.

About three-quarters of the 17,500 freshmen at the community colleges this year have needed remedial instruction in reading, writing or math, and nearly a quarter of the freshmen have required such instruction in all three subjects. In the past five years, a subset of students deemed “triple low remedial” — with the most severe deficits in all three subjects — has doubled, to 1,000.

The reasons are familiar but were reinforced last month by startling new statistics from state education officials: fewer than half of all New York State students who graduated from high school in 2009 were prepared for college or careers, as measured by state Regents tests in English and math. In New York City, that number was 23 percent.

Many of those graduates end up at CUNY, one of the nation’s largest urban higher-education systems, which requires its community colleges to take every applicant with a high school diploma or equivalency degree.

To bring thousands of students up to speed, those colleges spent about $33 million last year on remediation — twice as much as they did 10 years ago. They are expanding an immersion program that funnels hundreds of students exclusively into remedial classes.

But there is concern that the effort is diverting attention from the colleges’ primary mission.

“It takes a lot of our time and energy and money to figure out what to do with all of these students who need remediation,” said Alexandra W. Logue, the university’s executive vice chancellor and provost. “We are doing some really good things, but it’s time that we’re not thinking about our other wonderful students who are very highly prepared. We need to focus on them, too.”

At LaGuardia Community College in Queens, where 40 percent of the math classes are remedial, faculty members like Jerry G. Ianni have been increasingly dividing their time between teaching those classes and teaching courses for academic credit, prompting worries that professors are becoming de facto high school teachers.

“Most students have serious challenges remembering the basic rules of arithmetic,” Dr. Ianni said of his remedial math class. “The course is really a refresher, but they aren’t ready for a refresher. They need to learn how to learn.”

On a recent afternoon, a half-dozen students in that class prepared for a test, called a Compass exam, that would allow those who passed to start studying college-level math. Without college math skills, students cannot graduate. Seventeen others in the class had not even qualified to take the test; they will have to repeat the course until they qualify or they give up, as history shows many have.

The knowledge gap at community colleges is increasingly being recognized as a national problem. About 65 percent of all community college students nationwide need some form of remedial education, with students’ shortcomings in math outnumbering those in reading by 2 to 1, said Thomas R. Bailey, director of the Community College Research Center at Teachers College at Columbia University.

Nationwide, as at CUNY, fewer than half of students directed to take one or more remedial classes — “developmental education” is the term administrators prefer — complete them.

“Many, many community college presidents will say that math developmental education is the most difficult problem they’re facing,” Dr. Bailey said.

On Monday, the Obama administration began a series of “community college summits” at campuses across the country to gather ideas on how the schools can produce more graduates. The Bill and Melinda Gates Foundation has pledged up to $110 million to improve remedial programs at community colleges.

At CUNY, the biggest concern is the students who badly lag in the three subjects.

“These students have a really low probability of success, and it’s hard to know how to work with them,” said Dr. Logue, the provost. “There’s no question that the more remediation a student needs, the less likely they are ever to graduate.”

Students are often surprised to learn that they still have hurdles to clear before they can begin college-level work. As a freshman at LaGuardia, Angel Payero, 18, took the necessary assessment tests in August and discovered that he was deficient in reading, writing and math.

“Throughout high school, I was a good math student, and to find out that it was my lowest grade of all three was really surprising,” said Mr. Payero, who graduated from the High School for Arts, Imagination and Inquiry.

Neither of his parents, who are from the Dominican Republic, attended high school, he said. Yet Mr. Payero yearns for a career in psychology. “I feel like I can really understand people and where they come from,” he said.

Remedial classes require commitment. Fees for part-time students typically range from $560 to $910 per class. For full-time students, the $1,650 paid in tuition each semester covers remedial instruction, but none of the classes offer academic credit. Financial aid can help, but drawing from those resources could leave students with less to cover the cost of college-credit courses.

Further, many students, remedial or not, will never graduate. CUNY officials say that only about 25 percent of full-time students at the community colleges graduate within six years, though the university does not track students who transfer to another college. A recent nationwide study that followed community college freshmen over six years found that only 35 percent earned any sort of degree.

LaGuardia’s president, Gail O. Mellow, said she was encouraged by the immersion program that CUNY began more than a year ago.

Normally, remedial students juggle those courses and college-level classes over several semesters. But in the immersion program, students take only remedial classes for one semester, spending up to 25 hours a week in the classroom, for a flat fee of $75. More than 70 percent of students have passed the program, compared with 50 percent of those in the regular remedial classes, university officials say.

The university plans to expand the immersion program, which now has about 350 students, to 1,000 next fall.

“I embrace developmental education because it pivots lives,” Dr. Mellow said. “If students get an associate’s degree, they can become nurses, making $85,000 a year. If they don’t make it through that developmental class, they’ll barely make minimum wage.”

Still, as government financing has eroded in recent years, Dr. Mellow has had to trim some support services available to remedial students, reducing the number of tutors and cutting math lab hours. She said she was determined not to raise the average class size beyond the current 24 students.

The New York City Department of Education is also trying to help reduce the ranks of remedial students. It has begun tracking how each high school’s students go on to perform in college, and starting in 2012, it will include measurements of a student’s college readiness in its annual school progress reports. The city and CUNY are working together to align their academic standards and curriculums.

CUNY administrators point out that the academic prowess of students in their four-year colleges has risen: the percentage of freshmen at the five most selective colleges with combined scores of at least 1,200 on the SAT reasoning test has almost tripled in 10 years — to 24 percent this year. At the community colleges, the proportion of new students who need remediation has fallen slightly during that time.

But because of growing enrollments, the number of students requiring remediation has climbed. In 2001, 3,041 students needed remediation in three subjects; last fall, the number rose to 4,168.

For Dr. Ianni, that means more time spent teaching high school math. But working with marginal students has its rewards: all of his students who took the Compass exam passed.

“They didn’t really realize that they had it in them,” Dr. Ianni said. “For those who make it to the exit line, to see the beam on their faces is really incredible.”
Posted by Mercury at 3:12 PM