Bernatowicz has the right idea 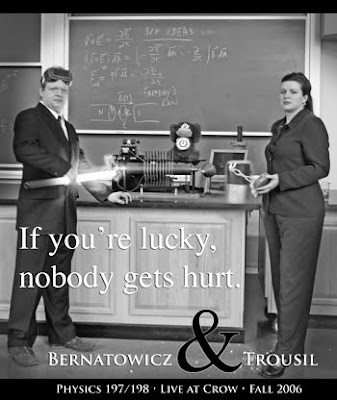 It had to be innovative, pay attention to education research and to psychology, and take an experimental rather than a programmatic approach to course design.

In 2004, he chose an innovative course designed by Thomas A. Moore, PhD, of Pomona College and set forth in Moore’s textbook Six Ideas That Shaped Physics. It was one of several physics courses whose development had been funded by a National Science Foundation program run by John Rigden, PhD, now an adjunct professor of physics at WUSTL but then a professor of physics at Harvard University.

Seven years later, Six Ideas is the vehicle through which 360 freshmen encounter physics each year at Washington University.

“In a traditional physics course,” Bernatowicz says, “the teacher comes in, goes to the chalkboard, explains Step A, moves logically through discussions of Step B, then Step C, and so on."

“I submit,” says Bernatowicz, “that this is a failed methodology. Learning physics this way is like trying to master the piano by watching a concert pianist play.

“The traditional lecture doesn’t tell you how to get from Step A to Step B, how to develop the intuition that Step B is what comes next, how to conceive of the problem in the first place, how to write down Step A. None of that stuff is there.”

What the course is not.

When he first taught introductory physics, Bernatowicz noticed that, by the end of the year, even the bright and motivated students were losing the thread.

What replaced insight were two bad habits: not reading the text, and doing the problems by plug-and-chug.

Both have to do with the pressure to get things done fast, says Bernatowicz, who always asks himself why students are doing whatever it is they are doing — or not doing — before handing out blame.

“Why should they read the text?” says Bernatowicz. “In the traditional course, they know what’s important because the teacher has talked about it. They don’t really need to read the textbook, just to listen what the teacher says, so they never do read it.”

What the course is.

Surprisingly, given the recent emphasis in the sciences on learning by experiment, textbook study is at the core of Six Ideas.

Moreover, things are so arranged that the students cannot succeed unless they read the textbook.

“We don’t teach them in class,” Bernatowicz says. “I don’t come in as a lecturer and say, ‘OK, here’s this stuff, and now go home and read about it.’ Oh, no, no, no. They read about it first and do two problems that require them to synthesize some of the concepts in the chapter. They hand in those problems when they walk in the door for class, and then, and only then, is the topic discussed in class.”

The first problem he gives students each semester puts them on notice that this is not a P and C class. What thickness of lead would it take to stop neutrinos coming from the sun?

“That’s not one you can solve by plug and chug,” he says. They’re told the “effective cross section” of a quark in a lead nucleus for the neutrino (how “big” it looks to the neutrino) but little else.

The answer, by the way, is about 2.5 light-years, the thickness of lead that light would traverse traveling at 300 million meters a second for two and a half years.

Classtime is spent in short lectures, never longer than 10 minutes, which Bernatowicz swears in the extreme limit of the undergraduate attention span outside of testing situations — “and I don’t give a damn how interesting you are,” he adds — doing two-minute problems and watching experiments.

The two-minute problems give the students a chance to see whether they understand but also to move about and to talk. During one class on electromagnetism, the first two-minute question was: Imagine two parallel wires, with current running the same direction in both. Would they A) attract one another B) repel one another or C) do nothing?

After two minutes, some of the students held up their textbooks so that the Bernatowicz can see the backs. Printed (very, very) large on the back are the letters A, B, C, D, E, F, T and Z. (Z = I have absolutely no clue what to do.) Students pointed to their answers.

Bernatowicz checked for a consensus — in this case, there was none — and then asked for volunteers to explain their reasoning. Bernatowicz is happiest when the students become so invested in their reasoning they begin to argue back and forth among themselves.

An answer (A) quickly emerged from the discussion. After checking to make sure everyone was aboard, Bernatowicz then walked to the end of the lab bench at the front of the classroom and switched current to two wires — which did indeed jump together as mandated by physics.

There’s nothing like a demo to make a point unforgettable.

Some demos are more dramatic than others. One favorite is the can crusher, where a large capacitor is suddenly discharged through a coil wrapped around the belly of an empty soda can, ripping it apart so violently that the ends fly to opposite sides of the room with a very loud bang.

“This professor is amazing!” one of his students wrote on ratemyprofessor.com. “I’ve never looked forward to a 3 o’clock class this much in my life. The man has a demo for everything, and the two-minute problems during lecture keep thing really interesting.”

Does that answer make sense?

Meanwhile, the homework is being graded — but not in the conventional way. The students are given points for getting the correct answer but also for explaining their reasoning and defending the plausibility of their answer.

That plausibility bit is important. “Students tend to believe whatever comes out of their calculator,” says Bernatowicz, and sometimes even scientists make the same mistake.

As a graduate student, Bernatowicz worked for a while on what is called “the missing xenon” problem. Earth contains less of this noble gas than other rocky planets and less than the solar system as a whole. Where did the extra xenon go?

One published paper he read proposed that it had been adsorbed on shales, ubiquitous rather porous rocks made by compressing mud. This wasn’t “prima facie dumb” he says.

The question was: Did the numbers work? The papers’ authors had used an odd set of units that didn’t have a clear physical meaning. And when Bernatowicz translated their units into ones he understood, he discovered that shale could hold all the missing xenon only if there was a layer of it 30 kilometers thick over Earth’s entire surface.

That was prima facie dumb.

So Bernatowicz gives the students points for arguing the plausibility of their answers and tries to teach them to feel the heft of numbers.

“How big is a billion?” he asks them.

You do the work, you get the grade

The key to the grading scheme, however, is that students may reclaim most of the points they might lose on the first attempt at the homework. When they go home after class, they can enter a code into the computer and see the problems worked in great detail, revise their homework, and hand it in for regrading.

This is done deliberately, Bernatowicz says, to coax them into confronting their mistakes and learning from them.

“In the ordinary physics class, students get back graded homework, go ‘Jeez, I don’t know what I did wrong,’ schrunch it up and throw it in a corner."

“So what we do,” he says, “is reward them for looking at it again.”

His goal is not to sort students into As and Bs but instead to bring them all along.

“Ever since I was in college,” he says, “it's been my view that if you do the work, you could get the grade, as simple as that. It’s not about brilliance, it’s about the hard work of learning.”

Then he says, “Consider how many times they’ve been exposed to the material after one class. They’ve read about it (one), they’ve worked problems about it (two), they’ve thought about two-minute problems and seen demonstrations (three), they’ve seen the answers to the problems and revised their answers (four). So that’s four passes at the same material, rather than just the lecture followed by putting off reading or working problems until the week before the test.”

As a result, the students come into tests relaxed, instead of “all stressed out and horrified.”

“If you try on the homework, you barely have to study for tests,” one of his students wrote on ratemyprofessor.com

Bernatowicz on exams is as unconventional as Bernatowicz on coursework. “When you’re in the classroom with students,” he says, “you might be able to command the students’ attention for 10 minutes at a time, but when they’re sitting an exam you have 100 percent of their attention, no questions asked, and you are a fool if you don’t try to take advantage of that to teach them something.”

He writes the exams himself, a process that can take weeks, and tries to build in material the students haven’t seen but can divine from what they already know.

The exams often include Kenny (as in South Park), in, for example, the South Park takeoff on Schrodinger’s famous quantum mechanical cat, where the problem is to discover the probable fate of Kenny rather than of S’s cat.

The exams are not timed — Benatowicz swore when he was an undergraduate that he would never do that to other human beings — and he tries to make them fair. “I can make an exam so hard, none of the students could pass it. Any teacher can do that,” he says.

“What you want,” he says, “is to give students a chance to tell you what they know and to explore their understanding.”

If an exam is well-written, he says, it gives the teacher a chance to spot conceptual misunderstandings and address them in class.

“We love physics, and we want our students to love it, too,” he says. “We’re not saying we’ll make it easy just so that they’ll love it, but we do want them to understand because it’s something we ourselves cherish and we want them to see how great it is."

“What I try to convey to my students is how absolutely interesting and exciting physics is, what we don’t know and what’s left for them to discover, the people of their generation. And the wonder of it.”
Posted by Mercury at 6:55 AM