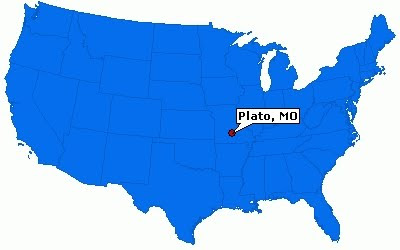 The Kansas City Star
The U.S. Census Bureau just raised the status of the southern Missouri community of Plato, an incorporated village in Texas County.

The bureau announced this afternoon that a spot less than three miles from Plato, population 109, is the country’s mean center of population, as of the official count in April 2010.

Census officials describe the center this way: “The place where an imaginary, flat, weightless and rigid map of the United States would balance perfectly if all 308,745,538 residents counted in the 2010 Census were of identical weight.”

The bureau said the first Census, in 1790, determined that Chestertown, Md., was the center of population. Since then, the center has told the story of national expansion and migration: It moved across Maryland, Virginia, West Virginia, Ohio, Kentucky, Indiana and Missouri .
Posted by Mercury at 6:43 PM