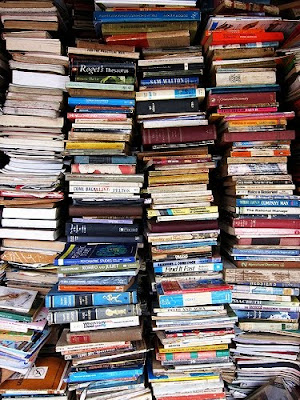 I stumble over them more than I do the cat.

"Help for the (Casual) Book Hoarder"

The New Yorker
Are you a book hoarder? Mark Medley of the National Post is one, and he wants fellow hoarders to share their stories. As he points out in his essay “Confessions of a Book Hoarder,” [below] hoarding is having its moment in the sun, largely thanks to A&E’s unlikely hit “Hoarders.” Medley acknowledges that his “morbid fascination” with the TV show is likely due to his own inability to get rid of a single book. He admits the issue is not the number of books he owns, but rather the fact that he can’t part with any of them. (Medley guesses that he and his girlfriend share a library upwards of one thousand books, a number he considers “rather paltry.”)

A cursory Google search (or just a glance around this office) reveals that Medley is not alone in his book hoarding. Though the perils of book sloppiness has been discussed recently, hoarding is of a different order. In fact, there is a medical condition known as “bibliomania,” which according to Wikipedia is a psychological disorder “characterized by the collecting of books which have no use to the collector nor any great intrinsic value to a genuine book collector. The purchase of multiple copies of the same book and edition and the accumulation of books beyond possible capacity of use or enjoyment are frequent symptoms of bibliomania.”

Well, thanks a lot, Wikipedia. I’ll never look at my four copies of “The Little Prince” the same way again.

Though we may not be diagnosed bibliomaniacs, it sounds like, on a practical level, Medley and I could use a few tips from Nancy Bass-Wyden, a co-owner of the Strand bookstore. Wyden was interviewed [below] recently in the Wall Street Journal about her personal book collection, which is at least double that of Medley’s. She is full of helpful advice for the casual book hoarder. Some highlights include:

* Allow yourself to display only five hundred books at a time.
* Organize books first by category, then alphabetically by author’s last name, making it easier for you and your guests to find them.
* Store your books upright, but if they must be horizontal (like coffee table books) do not pile more than four books.
* If you add a new book, take an old one out.

With such a healthy library, it’s doubtful we’ll see Wyden on “Hoarders” any time soon. But with only a quarter of her books on display at a time, Wyden’s secret must lie in storage. So who knows—maybe we’ll get a peek at the hidden libraries of America on A&E’s “Storage Wars” instead!

"Confessions of a book hoarder"

NATIONAL POST
The first thing people usually say to me, upon entering my home for the first time, is that I own a lot of books. They are wrong, of course. I am rather ashamed at the size of my collection, considering I studied English literature in university and now pretty much write about books for a living. Between my girlfriend and I me, there are probably between 1,000 and 1,250 books in our apartment, a number I consider rather paltry. Ideally, I’d like to double that number once we buy our first home — we currently rent — and I’m no longer faced with the prospect of hauling countless boxes of books between addresses.

No, the problem, in my opinion, is not the number of books I own, but that I am unable to get rid of any of them. I own some terrible, terrible books — you wouldn’t believe how many crap books get published in this country — but cannot, for the life of me, part with a single one. I am a book hoarder, which, in my line of work, is a troublesome problem to have. I had already acquired a (fairly) impressive collection of books before embarking on a career in arts journalism, a career that goes hand-in-hand with free books.

When you have upwards of 250 books come across your desk each week, things can quickly spiral out of control. Just now, I walked over to the part of the office where mail to me is delivered and counted 15 large containers filled with packages; these have come in the past three or four days. My first impression, upon seeing so many new books in one place, is to dive into them headfirst, like Scrooge McDuck into his vault of gold bullions.

When A&E’s Hoarders premiered a couple of years ago, I watched with morbid fascination; that’s me, I thought, in 25 years (OK, five years). Still I continued to accumulate books, without ridding myself of an equal number. In fact, I’m not sure I’ve ever gotten rid of a single book. All my university textbooks are still somewhere in my parents’ basement (if you’re reading this, Mom and Dad, do not get rid of that first-year Introduction to Politics textbook; I might want to read it someday for the first time).

I think the severity of my problem finally dawned on me a few weeks ago. After much pleading from my girlfriend, I finally spent an afternoon pruning my book collection. The shelves themselves have long since began to buckle; the weight of the books reshaped them from a sturdy, even plank into a smile, as if they are laughing.

I’d last attempted to cull my collection about a year ago, when I carried about 50 books from my shelves to a spare room in the basement; I intended to get rid of them, but they, of course, went nowhere. This time, I hoped to rid myself of a quarter of my books. Nothing so ridiculous happened, of course, but the fact that I found about a half dozen copies of Joseph Boyden’s Through Black Spruce — which I still have not read — and four copies of Lucy Knisley’s graphic novel French Milk — ditto — was proof enough that my addiction had crossed the line into a dark, uncharted area, where intervention may be necessary. I thought it was also fitting that I found both of my e-readers gathering dust under piles of books.

But I am getting better. At first, I would keep almost all the books sent to me, convinced I would, at some point down the road, read this debut short story collection or that literary journal. I would lug them back from the office, four or five at a time, and wedge them into my bookcase.

Now, I take very few books home; instead, a kindly editor whisks them off to a locked room, where they are safe from my second-guessing; they are sold, at different times during the year, at a book sale in our cafeteria, the proceeds of which go to literacy. On those days, I go down and gaze mournfully at my former books, and must stop myself from buying them back, or stealing them, like some sort of sad, book-obsessed madman.

The Wall Street Journal
Any book lover knows that it can be easy to have your collection overwhelm your décor. Just ask Nancy Bass Wyden, co-owner of the Strand Bookstore in New York City, who has a personal collection that numbers more than 2,000.

In her Manhattan home, Ms. Wyden allows herself to display 500 books, which include antique leather-bound books from the 1800s and works of contemporary fiction and nonfiction. Ms. Wyden houses the books in a dark-wood, built-in structure with adjustable shelving, which allows her to change up the display. Generally, larger coffee-table and art books go on the lower shelves so they're accessible to guests. Antique books go on the highest shelves, because she doesn't want them to get manhandled.

"I try to put at eye level what's extraordinary," says Ms. Wyden. "A person's library is a reflection of the person's taste and interests." Ms. Wyden, who is married to Sen. Ron Wyden of Oregon, is interested in politics and is an avid collector of autographed books. Her eye-level shelves include signed books by the likes of President Barack Obama and Eleanor Roosevelt. This is where she displays books that are potential conversation-starters—a book signed by the late novelist David Foster Wallace, for example.

Ms. Wyden also displays a few "meaningful mementos," such as her grandfather's pocket watch and a collection of antique wooden eggs, on the shelves in front of the books. "It's nice to break it up," she says.

Ms. Wyden, whose store is often hired to design book collections for film sets or private homes, says she sometimes gets requests to create shelves around certain looks. "They might say, 'We want something pastel,' " she says.

In her home, however, Ms. Wyden organizes her books by category so that she and her guests can find them easily. Within those categories, she organizes books alphabetically by author name. Ms. Wyden likes to tuck bits of relevant memorabilia into her books. A personal note written by Bill Clinton is tucked into a book that he signed, for example.

Ms. Wyden puts Mylar jacket covers on her older books to keep dust away. "What you don't want to do is encapsulate [a book] fully in plastic—it traps moisture in," she says. "But a dust jacket helps to preserve it."

For her leather-bound books, Ms. Wyden buys Triple Crown Leather Formula, a wax that preserves leather, and applies a light coating once a year, "just to give it a little bit of protection from drying."

She gives her entire bookshelf a good dusting at least once a year. If water spills on a book, she tries to sponge it up with paper towels, then lightly dries the pages with a hair dryer. "The pages might get buckled, even if you have it on a low setting," she says, so she presses the book under a heavier one for at least a day afterward. (If your book suffers greater damage, Ms. Wyden recommends taking it to a book restorer right away or consulting "The Care and Feeding of Books Old and New: A Simple Repair Manual for Book Lovers.")

Ms. Wyden makes sure her shelves are away from damaging direct sunlight. She also makes sure the area isn't too moist. "If you get mold on your books, you can't really get it out," she says, cautioning that people in humid places such as Florida may need a dehumidifier for rooms with valuable books. Ms. Wyden says it breaks her heart to see people store books in the basement or the attic. "The basement is too damp and the attic might be too dry," she says.

She generally prefers to store books standing upright, "as that's the way they're meant to be stored." The weight of the pile can damage the bottom books. Sometimes, however, she'll display coffee-table books in a small pile of no more than four, making sure that the books on top are smaller and lighter than those at the bottom. She'll typically place a decorative object such as a paperweight or magnifying glass on top to create an inviting display.

The key to a healthy book collection, Ms. Wyden says, is constant editing. When she adds a book, she tries to take something out. "If it keeps getting tweaked, what you have is more meaningful," she says. "It keeps your library fresh, and you feel more engaged with what's in there."
Posted by Mercury at 5:55 PM