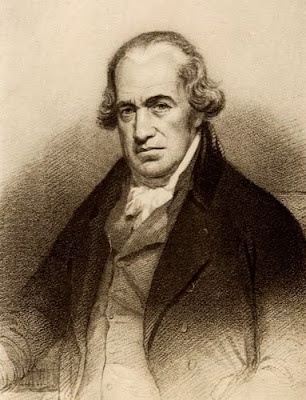 Industrial revolution hero's workshop, preserved since his death in 1819, goes on display at the Science Museum

guardian.co.uk
A new exhibition at the Science Museum reveals the engineer and inventor James Watt as not just a hero of the industrial revolution, but of anyone with a seriously messy desk: his attic workshop has been reassembled with its 8,434 items, including scientific instruments he had been working on 60 years earlier, still at his elbow when he died in 1819.

The workshop, including the oldest circular saw in the world, a machine created for the Royal Mint to standardise the size of coins for the first time, parts of flutes and violins, packets of chemicals, and his machine for copying sculptures in miniature complete with a wool stuffed red rag tied on where he kept bashing his head, was already legendary when he died. It was kept untouched for another century, even when the house in Birmingham changed hands. Occasional pilgrims were allowed in to pay homage. Curator Andrew Nahum recalled that one pilgrim wrote that the room felt "as if the hand and eye of the master has just crossed the threshold never more to enter in this world." Another described the dust lying as so thick "it was like walking in soft snow".

In 1924, a year before the house was demolished, the workshop – complete with door and window – was dismantled and sent with all its contents in two lorries to the Science Museum. Recently it has been on display but tucked in a corner of the balcony, with minimal interpretation, viewable only by peering through a window.

Now it has pride of place on the main floor, one wall removed so that visitors can walk inside and marvel. The engineering historian Adam Hart-Davis said: "He's a brilliant bloke, brilliant in so many different ways – just look at his work bench and you can see how many different things he was interested in."

Watt didn't invent the steam engine, but with his entrepreneur business partner Matthew Boulton he did improve its design so it generated vastly more power for a fraction of the fuel bill. Within 25 years of his design, a map shows Boulton and Watt engines mapping the spread of the industrial revolution across the country.

Curator Andrew Nahum believes his fame was consciously cultivated by the masters of the industrial revolution, who wanted a secular working man's hero instead of aristocrats and admirals. Nahum has installed a gallery of images of Watt, including his portrait that was used as a frontispiece on journals for mechanical engineers in Glasgow and London. It also features a Japanese woodblock from the 1850s of Watt by his fireside experimenting with steam from a kettle that was intended to encourage students into engineering, and a hilarious image of Watt in a Roman toga on a membership certificate for an engineering society.

Watt certainly fanned the cult of himself. The exhibition also includes scores of the miniature portrait busts he made with his sculpture machine and presented to friends and admirers, modestly describing them as "the productions of a young artist just entering his 83rd year".

The only thing missing from the display is the star of the most famous story about Watt, reproduced in many of the Victorian images: his kettle. The story that he first became interested in the power of steam by studying a kettle boiling for his tea when he was a boy was told by his niece to a biographer: Nahum can find no other evidence for it. There is a tiny drawing of a kettle in his notebooks – but he was 28 by then. Instead, the museum has borrowed an object from the Hunterian collection in Glasgow that definitely did get Watt interested in steam, a model engine which he was asked to repair.

Research by the museum shows that few visitors now have a clue who Watt – the first engineer honoured with a statue in Westminster Abbey (so imposing it was said to have cracked the paving when it was installed) – was. They hope the new display will put his star back in the firmament. "We need our heroes too," Nahum said.