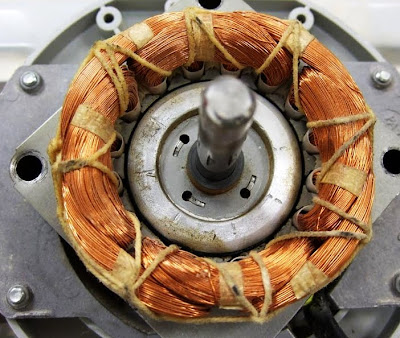 The author of the following article suggests that the people who disassemble scrap electrical motors are better off than a college educated friend of his and at the same time being "green". Being "green" is a social/philosophical concept that scrap workers could care less. They are more concerned bringing in money to feed families and pay bills. "Better off"...I don't think so. I have done this type of reclamation [and still do] and it is hard and sometimes dangerous work.

"The Motor Breakers of China"

The Atlantic
SHANGHAI, China -- I thought long and hard about how to do justice to Jim's generous invitation to guest blog, and finally settled on doing what I occasionally do at my own blog: throw some trash around and try to convince my readers that I haven't. My hope is that, by the end of the week, this will sound a little less mad than it does at the beginning.

Below, a photo of a woman recycling a piece of imported American scrap metal inside of an industrial-scale motor scrap recycling (and copper smelting) operation south of Shanghai. 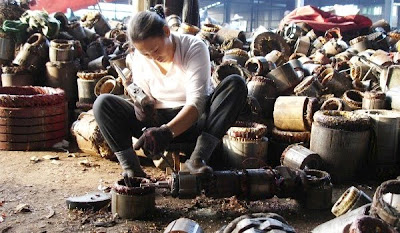 When I show this photo to American and European audiences, it often generates -- initially, at least -- feelings of pity on behalf of the presumably exploited woman, and (for lack of a better term) the "white guilt" of the audience on behalf of itself. So what I want to get straight via this post and the remaining six posts that I intend to do this week, is that guilt and pity are the wrong responses to this photo and others like it.


First, workers, like this woman, skilled in efficiently breaking apart complicated pieces of American throwaways into their recyclable components, are highly sought by China's vast and thriving scrap metal industry (which accounts for roughly 25% of Chinese aluminum production, 40% of copper production, and 15% of steel). On China's East coast, she can expect to earn roughly RMB 3500 - or nearly US$500/month, and choose her place of employment. That's better pay than the average Chinese university graduate (for example, I'm acquainted with a 28-year-old Shanghainese mechanical engineer with a Canadian master's degree who earns "under RMB 4000/month"). He doesn't have the job security of the motor breaker's co-workers.

Second point. What she's doing is good for the environments of both China (where she's doing it) and the United States (where that armature was tossed into a recycling bin). The only profitable way to recycle a motor armature into its constituent parts is to "break it" manually; in the US, with its expensive labor, that's just not possible as a business proposition. As a result, US scrap motors either sit idle (prior to China's commodities boom, you could find whole piles of the things in farm fields on the outskirts of any US city), or are too expensive to recycle (minimum wage won't cut it for this kind of work) ... or they get shipped to China where they're recycled completely, providing a relatively clean alternative to mined, virgin materials. 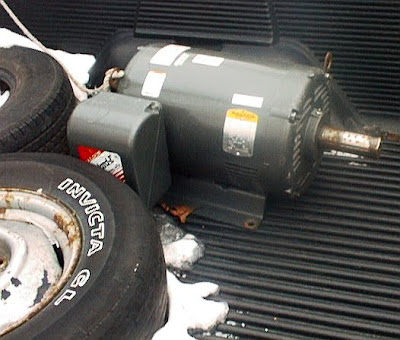 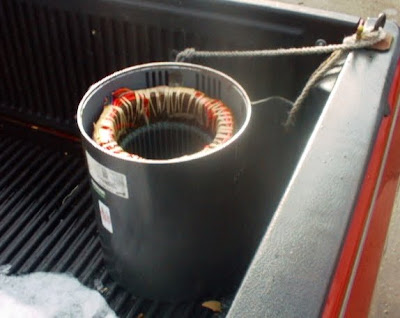 Armature and case are steel. End pieces and "pecker box" are aluminum. And of course the copper core and wire.
Posted by Mercury at 12:55 PM

Hello I have been looking for some information of electric motor recycling at this stage , There are a few webpages and videos out there for the beginning ( when a motor breaks down , and a guy cleans it , or takes it to the scrap yard , I have been wondering what happens to the motors then? .... Your post leads me to believe they are cleaned by hand?... can you provide me with further information? are there any American facilities that recycle the copper from the electric motors?

The article refers to Asian reclamation centers. The pay is low and the working condition can be hazardous.

Any large scrap metal dealer will purchase your motor[s]. They have their own staff that will extract the copper. Just remember that the price for you will be less than if you offered just copper scrap.

It would take too long for me to describe the procedure for copper extraction. You will just have to experiment yourself.