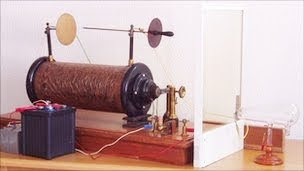 BBC NEWS
Scientists have dusted off X-ray equipment dating from shortly after the discovery of the rays in 1895, in order to put it through its paces.

Researchers from the same Dutch town where the system was originally built used it to produce striking images that belie its simplicity and age.

The team said the images required a radiation dose to the subject some 1,500 times higher than a modern X-ray.

Details of the research were published reported in the journal Radiology.

Following a publication by X-ray discoverer Wilhelm Roentgen just weeks before, the pair built their device from parts found at the high school and used it for anatomical imaging experiments.

The machine ended up in a warehouse in Maastricht and was unearthed last year for a history programme on television.

Then Gerrit Kemerink of Maastricht University Medical Center decided to put the equipment to the test against a modern system.

"To my knowledge, nobody had ever done systematic measurements on this equipment, since by the time one had the tools, these systems had been replaced by more sophisticated ones," said Dr Kemerink.

The team carefully recreated the experimental conditions that the machine's inventors would have used.

Given that a high radiation dose might be required to carry out the tests, the team obtained a hand from a cadaver as their imaging subject - rather than the "young lady's hand" listed in Hoffmans and van Kleef's notes.

Within a year of the rays' discovery they had become both a medical and theatrical showpiece, and the first indications arose that extensive exposure could be harmful. As a result, part of the race in X-ray science has been produce better images with less radiation exposure.

The team accordingly found that using a modern detector, a radiation dose 10 times higher was required from the antiquated system when compared to a modern one.

Using a photographic plate and the same imaging conditions Hoffmans and van Kleef used, a dose 1,500 times higher was required.

What is more, the X-rays exited the machine over a broad area, leading to blurry images.

But putting the equipment to the test was evidently reward enough for the authors.

"Our experience with this machine, which had a buzzing interruptor, crackling lightning within a spark gap, and a greenish light flashing in a tube, which spread the smell of ozone and which revealed internal structures in the human body was, even today, little less than magical," they wrote.
Posted by Mercury at 6:12 PM