Amusing...my stuff is in vogue 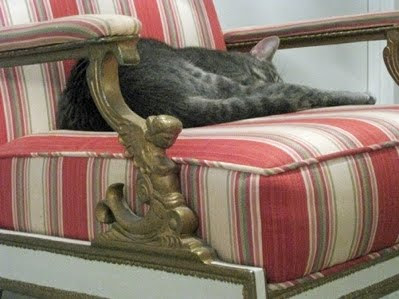 The New York Times
THE ballad of Kenyan Lewis and Grace Kelsey, were there a ballad of Kenyan and Grace, would be in part a song about stuff — old stuff, rustic stuff, American stuff, stuff that was designed, above all, to be useful, but whose handsomeness grows more burnished with each passing year. Prop designers and dealers by trade, the two are collectors of early 20th-century Americana, objects that date, roughly, from the end of the Victorian era through the machine age.

He and Ms. Kelsey, 33, gave up their apartment on the Lower East Side in 2008, and now rent a house in Accord, N.Y., a hamlet about two and a half hours north of Manhattan. When they moved, their belongings filled two 26-foot moving trucks; they made an additional trip with one of the trucks, plus five more trips with a minivan. The contents included stacks of Popular Mechanics magazines from the 1930s and 1940s, vintage patterns and buttons, tube radios and old fans, camp blankets, books, decanters.

Throughout the house, which dates from 1890, the new is scarcely evident, except in the office, where a worn 30-foot American flag is draped along a window near three computer workstations, and in the modestly sized attic, where a 73-inch TV looms like a drive-in movie screen.

Just about everything else is old and in use, like the vintage luggage that serves as storage, with labels like “pajamas” and “taxes” written in cursive, and the bench made in part from a sewing machine dating to the beginning of the 20th century, on which the enormous TV is perched.

The aesthetic that Mr. Lewis and Ms. Kelsey cultivate reflects a nostalgia, but not for the Victoriana that has been so popular in recent years. As is the case with a number of other collectors they know, their fascination is not with dark rooms, ornate lines or the macabre, but with the stylistic era that followed. It is a simpler, more rustic and American-inflected style that is more general store than taxidermy-appointed lodge, and that emphasizes objects that are well-made, durable and useful: wire storage baskets, machine-age metal tools, leather couches, canvas bags, colorful woolen blankets and interiors made of barn wood.

Through their prop-design business, By Kenyan, Mr. Lewis and Ms. Kelsey have had a hand in spreading this look, providing furnishings like club chairs, trunks and globes, and antique-looking signage, to restaurants like the Smile, on Bond Street, and stores like Save Khaki, which sells classic men’s wear that looks broken in.

“Manly antiques,” said Ms. Kelsey, an artist who spent years working as a fashion model. “I like machine-age things, cleaner things” that aren’t “too embellished.”

Other examples of the aesthetic can be seen at Partners & Spade, on Great Jones Street, the studio co-founded by Andy Spade, of Kate and Jack Spade, where vintage spools of twine and ham radios are displayed like sculpture. Or at the Ace Hotel, where an American flag the size of a studio apartment hangs in the lobby. Or at the Freemans Sporting Club store on Bleecker Street, the newest offshoot of the Lower East Side restaurant, which sells Army-green Stanley thermoses and shirts inspired by the ones worn by machinists.

But the most obvious example may be the wool camp blankets favored by collectors like Ms. Kelsey and Mr. Lewis, who stocked up on vintage ones when they moved upstate. The Hudson’s Bay point blanket, the best-known camp blanket, sold out at Colette, the taste-making boutique on the Rue St.-Honoré in Paris, in December. It is perhaps no coincidence that Hudson’s Bay, a Canadian company that has been producing the blanket since George Washington’s presidency, hired Partners & Spade a couple of years ago as part of a branding initiative to put the blanket’s primary-colored stripes on paddles, axes and pillows.

“When I go to fairs,” said Mr. Lewis, “I see a lot of people gravitate toward them — they are super-popular.”

So much so, in fact, that Ms. Kelsey, who collects camp-blanket coats, said that now, when she is looking for them, she stays away from those made from Hudson’s Bay blankets, “just to have a little variety.”

MELISSA HOWARD, 37, the owner of a men’s vintage clothing store in the East Village, is another admirer of the early 20th century. “Everything was made so beautifully,” she said.

Her shop, Stock Vintage, which opened in 2006, has become a destination for those with a serious interest in American work wear that predates the 1950s — when “a man looked handsome in his work clothing,” she said.

But furniture and objects are an obsession, too: When she leaves a flea market or antiques fair, she said, she puts whatever she has bought beside her, on the passenger’s seat, so she can look at it on the way home. “My heart just starts to really beat,” she said. “I wouldn’t make a dime in the antiques business. I’d want to keep everything.”

In feel, if not in volume, the furnishings she collects fit well in her small one-bedroom apartment, which has a wood-burning stove, low ceilings and floor planks more than a foot wide. (The overflow is in storage upstate, but this spring, she said, she plans to move it to a space in the Brooklyn Navy Yard, where she can have better access to pieces for her store and can show them to interested customers.)

Before she moved in five years ago, she had mourned the loss of a dream home, a stone house upstate that she sold after a breakup. “This apartment feels the same way,” she said. “I don’t long for the country as much.”

Inside is a 1920s bed by Old Hickory, an Indiana company that began selling rustic wooden furniture in the 1890s; a leather couch from the 1930s; Adirondack-style rocking chairs; and displays of early dog collars, hunting boots and L. L. Bean canvas bags. Tucked away are collections of quilts, camp blankets and Navajo rugs. Found portraits of dogs hang on the walls, and painted signs point to Camp Hupie and warn hikers of bears on the trail.

To an extent, Ms. Howard’s interest in Americana was inherited, she said. When she was a child in Michigan, her mother, an antiques dealer, built a saltbox house, and “everything was custom, everything was period,” she said, down to the handles on the doors. “It was very extreme.”

She added: “I remember telling my mother, ‘When I grow up, I will never live with antiques.’ She laughs at me now.”

A S the popularity of the Hudson’s Bay blanket shows, the appeal of early 20th-century goods is not limited to vintage. Classic items from companies like Hudson’s Bay or Pendleton — known as heritage brands — which never stopped producing them, or revived versions inspired by the classics are also enjoying a renaissance. An example from the fashion world is L. L. Bean, whose boots and bags have made a comeback in recent years.

“These companies are still doing what they’ve been traditionally doing for a long time,” said Michael Williams, a partner in the public relations firm Paul and Williams and the author of A Continuous Lean, an influential men’s wear blog that focuses on vintage American style. “It’s the furniture equivalent of a trench coat and a navy suit. You’ll never look back at a picture of yourself 20 years from now and be embarrassed.”

But there is one brand — one word, really — that comes up in any conversation about vintage Americana: Ralph, as in Ralph Lauren, the company founded in the late 1960s, whose owner sought to evoke a world of privilege that looked toward England but was wholly American. The company later expanded into more rugged realms with lines like RRL, which reproduces men’s vintage work wear.

“Ralph perfected that aesthetic,” Mr. Williams said. “I think they’re the envy of everyone.”

Stories abound of how the company’s buyers comb Brimfield, the antiques fair held three times a year in Massachusetts, looking for items that embody its carefully calibrated look. A number of collectors in this small world have worked for, or had business relationships with, Ralph Lauren: Mr. Lewis, for instance, created the weathered-looking wooden Rs that decorate some of the company’s stores in Manhattan; Greenwich, Conn., and Japan.

Ralph Lauren was one of the inspirations for Free & Easy, a monthly magazine published in Japan, where a niche group of collectors is enamored with the emblems of a certain kind of vintage American manhood, one of houndstooth and denim, motorcycles and fountain pens. Ms. Howard’s shop has a big Japanese following as well, she said, and Mr. Williams noted that some of the designers he knows believe that “the Japanese basically taught us everything we knew about collecting all this stuff.”

Minako Ito, a representative for the magazine in New York, said it has about 150,000 to 200,000 readers, and is aimed at Japanese men in their 40s and 50s. But several American fashion designers, buyers and stylists she has met in New York have been familiar with it, she wrote in an e-mail.

“ ‘Rugged’ is the key word for the magazine,” she added. “Steve McQueen is its icon.”

DAVID COGGINS, 35, a writer who lives in a one-bedroom apartment in the West Village, has been featured in three issues of Free & Easy, most recently in a spread on club chairs, of which he has three. If Ms. Howard’s apartment is a cabin, Mr. Coggins’s is a gentlemen’s club.

The living room with windows on three sides is filled with books and, at last count, 20 rugs. Portraits of Argentine soccer teams dating to the 1930s are propped on top of the bookshelves, and the books are so carefully arranged — by size, color and theme — that it isn’t surprising to learn that when Mr. Coggins moved to the apartment a little over a year ago, he recreated the book display from his previous home, using a photograph he had taken of the shelves as a reference.

Books sitting in neat piles on the floor are the ones he has yet to read. “I come from a family of book stackers,” he said. It is also a family of designers: his mother does interiors; his father is an artist and set designer.

Mr. Coggins retreats to his family’s house in Wisconsin every summer, bringing his work (he writes for magazines and Web sites, and is collaborating on a book for Taschen on the most expensive objects in the world) and spending time fly fishing and walking in the woods. His New York apartment, and his persona, are an urban and urbane translation of that life.

In conversation, Mr. Coggins is able to quickly cleave what he likes (objects from the interwar period, the writers of that era, wooden objects, gentlemanly things) from what he dislikes (new things, spaces that don’t have a sense of humor).

“I like things that have a function, or once did,” he said. On the fireplace mantel, sitting beside an old polo ball and a cricket ball (“things that were much nicer than they had to be when they were made,” he said), are antique fishing floats and buoys, which also dot the windowsills. A red-and-white boating flag is draped over a door.

To friends who are collectors, his apartment isn’t anything out of the ordinary. But “to other people,” he said, “it’s obsessive.”

When asked about the impression this carefully crafted space makes on the women he dates, Mr. Coggins hesitated, then offered an anecdote about a former girlfriend. On her first visit to the apartment, he said, she remarked, “Well, there’s not a lot of room for anything else.”