Those mutant monsters of the 50s 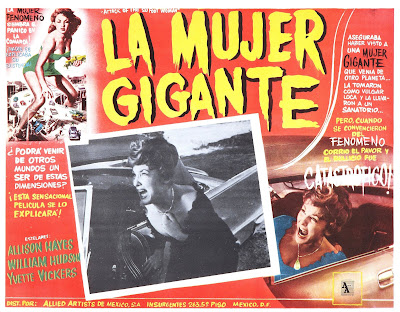 "The Nuclear Monsters That Terrorized the 1950s"

What would a visiting alien learn from Them!, Godzilla, and Attack of the 50-Foot Woman?

People who want to talk about the jumpy, kitschy, gloriously lurid movie genre we now know as 1950s sci-fi usually start with Susan Sontag. This is not because Sontag is a bug-eyed alien or 50 feet tall but because she wrote, in 1965, the definitive essay on Cold War dystopian fantasy: “The Imagination of Disaster.” “We live,” she claimed in that piece, “under continual threat of two equally fearful, but seemingly opposed, destinies: unremitting banality and inconceivable terror.” The job of science fiction was at once to “lift us out of the unbearably humdrum … by an escape into dangerous situations which have last-minute happy endings” and to “normalize what is psychologically unbearable, thereby inuring us to it.”

In other words, a good horror/fantasy/sci-fi flick provides a healthy dose of escapism, but it also keeps one eye fastened on what we wish to escape from. During the Depression, that could have been the exhausting grind of making ends meet. During the 1950s, it was relentless domesticity and something altogether more insidious: the Soviet Menace and the threat of nuclear war. The United States tested the first atom bomb in July 1945 at Alamogordo, N.M. A month later, it used the new technology to annihilate Hiroshima and Nagasaki. After WWII, images of the carnage in Japan mingled with unease about a growing Communist presence in the East, especially once the USSR exploded its own atomic bomb in 1949. Science fiction movies had the double task of distracting viewers from their pedestrian lives and calming the anxieties generated by a shadowy, high-stakes political rivalry.

The films trafficked in the strange and fantastic—mutants, alien invaders, robots—but they also made real dangers mundane, “inculcating a strange apathy concerning the processes of radiation, contamination, and destruction.” The more Doomsday devices you see go off, presumably, the less they faze you. What they didn’t do was challenge any of the social conventions that rendered such veiled discussions of nuclear power necessary in the first place. In their visions of atomic apocalypse, B-movies crystallized American paranoia without questioning it. They dehumanized otherness but turned a blind eye to how such dehumanization ended up feeding the nation’s terrors. Deep down, these films had reactionary souls; Sontag finally concluded that they constituted an “inadequate response” to major socio-political issues. (Andrew Tudor went even further when he claimed that the movies glorified government as a bastion of elites uniquely capable of providing for our defense. These flicks “teach us not so much ‘to stop worrying and love the bomb,’ ” he wrote, “as ‘to keep worrying and love the state.’ ”)

But the movies were entertaining—and lucrative. Between 1948 and 1962, Hollywood released more than 500 science-fiction features, which were widely distributed to movie palaces, neighborhood theaters, and drive-ins. Them!, a cautionary tale about giant irradiated ants, was Warner Bros.’ highest-grossing film in 1954. We remember many of these flicks today with mock horror at their corny dialogue, impenetrable plots (I’m looking at you, Cat-Women of the Moon), and less-than-convincing special effects (hello, The Mole People). Yet a few attained critical acclaim, even true classic status. Largely acknowledged as the best of the bunch are 1951’s The Day the Earth Stood Still, The Beast From 20,000 Fathoms (1953), It Came From Outer Space (1953), The War of the Worlds (1953), Creature From the Black Lagoon (1954), Tarantula (1955), Forbidden Planet (1956), Invasion of the Body Snatchers (1956), and The Incredible Shrinking Man (1957).

Of course, as the French director Francois Truffaut wrote, “When a film achieves a certain success, it becomes a sociological event, and the question of its quality becomes secondary.” Imagine that you were the alien Klaatu visiting Earth for the first time. Presented with a sampling of these nuclear fables, by turns outlandish and conservative, cheese-tastic and haunting, what might you infer about the world you’d discovered?

That science is amoral. The celluloid fantasies of the Atomic Age teem with scientists who are mad, hubristic, irresponsible, or just plain evil. But these Promethean overreachers (and/or their creations) generally come up against heroic doctors or specialists who are equally knowledgeable. Thus, in Them!, while it is fallout from the Trinity blast in New Mexico that transforms the ants into 18-foot armored monsters, it is also a father-daughter pair of entomologists, Gwenn and Pat Medford, who deduce what’s happening and how to stop it. (With flamethrowers, mostly.) In terms of sensibility, director Gordon Douglas is clearly a science nerd. He devotes an entire scene to the elder Medford’s charmingly jargon-laden lecture about ant life cycles; chalkboards and slides are dusted off; the audience falls, for a moment, under the spell of discovery. And in another scene, police investigate a general store that has been ravaged by the mutant Formicidae. Yet as the men poke around the ruins, a television cheerily broadcasts a WHO report about how radiation might be used to eradicate disease. Ironic? Sure. But it’s an irony with real optimism at its edges.

Irradiated baddies menace 1950s cinema. Godzilla—roused from the depths of Bikini Atoll by atomic testing—terrorizes Tokyo with nuclear halitosis. Giant, mutated spiders roam the planet in World Without End. I Was a Teenage Werewolf explores the effects of radiation on the human genome, while the “school bus-size locusts” from Beginning of the End owe their powers to USDA tests of radioactive fertilizers. At the same time, though, we humans would be lost without technology—on-screen, anyway. Electricity defeats the alien in The Thing from Another World. Fighter pilots best Tarantula’s arachnids by dousing them in napalm. As Peter Biskind wrote of the genre in Seeing Is Believing: How Hollywood Taught Us To Stop Worrying and Love the Fifties, “where science caused the problem, science often solved it too.”

That the universe exists in black-and-white. In atomic B-movies, knowledge may be amoral, but people (and creatures) fall neatly into “good” or “evil” camps. (The question of who controls the immensely powerful technologies science has made possible in real life thus haunts every good sci-fi flick. Is it “Us” or “Them”?) Stark dichotomies were not new to cinema in 1950—Noel Carroll once defined “Otherness, epitomized by the monster” as “the essential ingredient” in all horror film—but the nature of the Other changed during the Cold War. Depression-era monsters captured viewers’ sympathy. Dracula had a suave, campy glamour. Audiences wept when King Kong died. Yet by the time 1950s filmmakers revived the genre, on-screen ghouls had lost all trace of pathos. They were meant to symbolize our supposed Communist foe: ruthless, cold-blooded as an insect or reptile, utterly strange. In fact, the ants in Them! sometimes seem more machine than creature (especially when, during a battle sequence, the side of one ant slips down, and you can see its mechanical insides whirring away). They are strong, smart, aggressive, collectivist, and impeccably organized. They communicate via an eerie keening that sounds almost like sonar. Their gleaming carapaces evoke the technology of war. You get the sense that giving any 1950s sci-fi monster moral complexity would interfere with the political allegory. More important, it would lessen the drama of being confronted by something terrifying and unknown.

That women are scary. And sexy, too, just like the bomb itself. In Paranoia, the Bomb, and 1950s Science Fiction Films, Cynthia Hendershot has written persuasively about the eroticization of nuclear power. “In postwar bomb fantasies,” she argues, “sexuality becomes a means of containing the fear of the limits of meaning.” She points out that French designers named their risqué new bathing suit after the site of the Bikini bomb tests; pop songs such as “Atomic Bomb Baby” conflated coital climax with nuclear explosion; Rita Hayworth’s image was stenciled onto a Bikini bombshell. Maybe that’s why oversexed femininity permeates so many sci-fi horror flicks from the Atomic Age. Take the lingerie-clad 50-foot-woman, blasted with alien energy and rampaging through Los Angeles. (“A titanic beauty spreads a macabre wave of horror!” gasped the tagline). Or Mothra, an ancient female deity who assumes the form of a giant moth to rescue two maidens kidnapped from her secluded (and irradiated) island home. In Them!, the monstrous fertility of the queen ants threatens to topple a social order dominated by men. (Joan Weldon’s gutsy scientist may be a babe, but she spends the entire movie chastely in her father’s shadow.) Hendershot proposes that, in a paranoiac worldview, the forces for purification and progress are constantly at war with those of contamination and degeneracy. Since at least Victorian times, matriarchal societies implied a backward step in evolution. So gendered 1950s sci-fi monsters take fears of Darwinist decline, run them through a nuclear power generator, and serve them up to a viewing public already worried about—and fiercely protective of—its civilization. The effect becomes one of diffuse suspicion. Who exactly are the enemies poised to dismantle the American dream? Women? Soviets? Heedless scientists? Somehow all three converge in images of irradiated, unknowable creatures eager to reproduce throughout the United States.

That’s why, for my part, I don’t buy Sontag’s assertion that sci-fi/horror flicks are out to habituate us to the nightmares of the Atomic Age. In true reactionary fashion, I think they want to ramp up dread. Because while the explosion of fantastic imagery across a movie screen can provide a momentary burst of pleasure (as well as terror), it leaves uneasiness in its wake. You are not numbed but sensitized. Questions and insecurities linger.

This is the one-two punch of the atomic bomb: impact and aftermath. After the annihilating blast comes the radiation, the creep of poison that makes your cells betray you from within. No wonder nuclear horror films are saturated in paranoia, fear of enemies external and internal blooming over them like a mushroom cloud. Their diffuse nervousness feels as uncontainable as the atomic danger producing it. And the threat, the anxiety (not to mention the additional threat bred by the anxiety), all seem wild and protean as a mutating gene. They build until you get the sense that, somewhere, a bomb has to detonate. Destruction is at once just around the corner and already complete.
Posted by Mercury at 3:09 PM

Email ThisBlogThis!Share to TwitterShare to FacebookShare to Pinterest
Labels: mutant monsters of the 50s, Susan Sontag