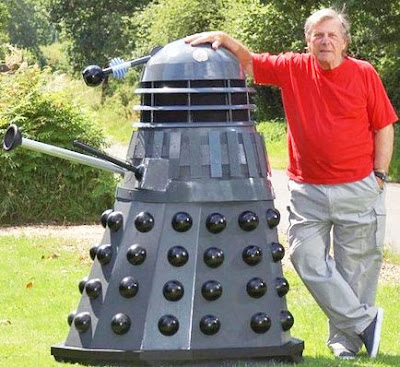 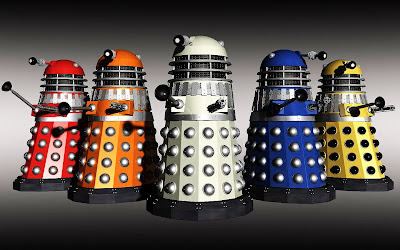 Those over sized salt and pepper shaker-looking objects have been a devil-like nemesis of many Dr. Whos.

Raymond Cusick, who gave the Doctor's enemies their enduringly terrifying appeal, has died after an illness

The man who brought to life Doctor Who's greatest foes has died aged 84, his daughter has said. Raymond Cusick worked as a production designer on the BBC show from 1963 to 1966.

Terry Nation, who died in 1997, wrote the 1963 story The Daleks, in which the "satanic pepperpots" first appeared, but it was Cusick who came up with the machines' distinctive look, including the bobble-like sensors, eyestalk, sucker and exterminator weapons.

The Daleks have remained fundamentally unchanged in appearance in 50 years, and have remained the Doctor's most popular enemies even since the show's revival in 2005. On Twitter, Tom Spilsbury, editor of Doctor Who Magazine, paid tribute to Cusick's "timeless" design.

Cusick also worked on shows ranging from Z Cars, Dr Finlay's Casebook and The Forsyte Saga to The Duchess of Duke Street, When the Boat Comes In and Rentaghost. He retired in 1987.

Cusick's daughter, Claire Heawood, said he had been suffering from an illness and died peacefully in his sleep on Thursday. He leaves two daughters and seven grandchildren.


"Raymond Cusick, designer of the Daleks, has died. His Nazis on casters were a stroke of genius"

Farewell Raymond Cusick, who has returned to the great mothership in the sky. The designer of the Daleks passed away in his sleep on Thursday, leaving behind one of the greatest cultural legacies of the 1960s. The writer Terry Nation came up with the concept of a race of aliens that glide rather than walk, but it was Cusick who put metal on the bare bones of an idea. One story is that he had only an hour to do it and was inspired by a pepperpot sitting on his table. Cusick, however, insisted that he wanted to recreate the shape of a man sitting in a chair and only used a pepperpot as an example of how it might move. Either way, the design was revolutionary because it was so uniquely alien – a monster without humanoid shape is infinitely more terrifying than something you can shake hands with. It did, however, come with a handy plunger, which suggests that even Daleks can get blocked sinks.

These angry pepperpots were basically Nazis on casters. In The Dalek Invasion of Earth (1966), Nation imagined a London occupied by fascist aliens and it looked an awful lot like it might have done if Hitler had won the war: empty streets patrolled by robotic stormtroopers, plungers fixed in a steely “seig heil” and a ragtag army of defiant Brits hiding out in Baker Street Station. The Daleks were venomous racists who despised anyone who seemed different – imagining that the Übermensch of the future was a blob of jelly in a wheelchair. In Genesis of the Daleks (1976) we learn that they were invented to be a super race that could survive the after effects of a nuclear war. Once they were switched on, they turned against their own creator, Davros. Why? Because he didn’t look like them. The Daleks needed a man like a fish needs a bicycle.

It was only a matter of time before the Daleks found fault with each other: a plunger that was too long, a skirt with one too many pleats. By the time of Resurrection of the Daleks (1984), they had split into two factions. One, called imperial, was decorated like a suburban bathroom – cream and gold. The other, renegade, was battleship grey and black. Both accused the other of being insufficiently pure and the renegades were disgusted that the imperials sullied themselves by deferring to Davros. The World War II metaphor reached full circle in Remembrance of the Daleks (1988), in which the two sides fought each other on the streets of 60s London. The renegades actually allied themselves with the leader of the local branch of the National Front. “You have to put your own people first,” intones one Nazi goon, underscoring the moral message of the Daleks that the purer you try to be in form the more corrupt you become in spirit.

The Daleks were the ultimate Dr Who villain because they complemented its philosophy. If the Doctor has a politics, it’s anti-authoritarianism. He’s the ultimate nonconformist – playing truant from his own people, dressed a century behind everyone else. By contrast, the Daleks were the ultimate conformists, to the point that they would destroy every last cell in the universe that didn’t look like their own. Unlike the Cybermen (essentially androids in fetish gear), the Daleks were enthused by their mission. The cry of “Exterminate” was so repetitive and ecstatic that it was almost orgasmic. It is entirely appropriate that one of the Doctor’s former companions posed with one in a men’s magazine. Both were naked.

You’ll notice that in all of the above I’ve quoted stories from the old series rather than the new. My relationship with the new series is rather like Arthur Scargill’s attitude towards New Labour – the project has been changed so much and so poorly that it isn’t worth following anymore. Part of the problem is that CGI has taken away the cheerful amateurishness of kid’s TV. The Daleks were conceptually terrifying but hilarious to watch as they drunkenly swivelled around, knocking down bits of set and waggling their plungers in the wrong direction. Today, they are so souped-up and smooth that they can even fly – taking away one of the finest gags in the English language: “How do you escape a Dalek? Run upstairs.”

But, then, I’ve always thought, why don’t the Daleks overcome their disadvantage by only invading places with lots of bungalows? If they had occupied Worthing rather than London, they’d have been unstoppable…

Born in London, Cusick first planned to be a civil engineer, but then after a stint in the army he planned to instead take up teaching. Having taught art, he then took an interest in design and joined Granada Television. This then led to a move to the BBC as a staff designer, which included being assigned to the fledgling Doctor Who. Here, he was to come up with the design of the Daleks, which arguably - alongside the TARDIS interior - is one of the key elements that made Doctor Who the success it was to become.

Talking to Doctor Who Magazine about his original design, Cusick said:


I spent the whole of one Sunday doing rough sketches of what I thought it should look like. I wanted to make sure it wasn't obvious how they worked, at the same time keeping them relatively simple. I didn't want either man shape or man height, so first of all I figured out that the operator would have to be inside the shell. Bearing in mind how long he'd have to be there, I thought it would be an idea to have him sitting, pushing himself along with his feet. A small actor in a sitting position would be only 4'6" high, which killed two problems with one stone.

However, as a staff designer he was never to receive royalties for his iconic realisation of Terry Nation's creations, and his enduring contribution took many years to be properly acknowledged.

As well as The Daleks, he would continue to work on the show during its first couple of years, designing more of the TARDIS in The Edge of Destruction, the futuristic/rugged worlds seen in The Keys of Marinus, The Sensorites, The Rescue and The Chase, the 'giant' items experienced during Planet of Giants, and even delving into history with The Romans; Cusick's last assignment was sharing the design load alongside Barry Newbery for the epic twelve-parter, The Daleks' Master Plan.

Outside of Doctor Who, he worked on a variety of BBC shows including Out of The Unknown, Dr Finlay's Casebook, The Pallisers, The Duchess of Duke Street, Rentaghost, When The Boat Comes In and Play For Today.

Upon his retirement he devoted a lot of time to his hobby, writing about the battles of the Napoleonic era. Retaining his interest over his creations, he was to be reunited with their modern equivalent during Doctor Who Confidential; he also recorded commentaries and appeared in features for the BBC DVD range.

Cusick had been suffering from a short illness. He leaves two daughters and seven grandchildren.

And, from the same source...

Raymond  Cusick was a designer for the British Broadcasting Corporation. He was best known for designing the Daleks, created by Terry Nation for the second Doctor Who story.

Born in London, Cusick became interested in engineering while still at art school, and began attending evening classes. However, his father wanted him to follow a more regular career, so Cusick took a course in mathematics and science, intending to become a civil engineer. Not finding this to his liking, he enlisted instead in the British Army and found himself stationed in Palestine but did not enjoy that experience either. On his return to England he completed a teacher-training course, but then obtained a nine-month position in repertory theatre at the Prince of Wales Theatre in Cardiff.

In the late-1950s Cusick took a position teaching art but then noticed an advertisement placed by Granada Television for designers on a show, Chelsea at Nine, which was recorded at the Chelsea Palace Theatre.

Cusick then joined the BBC as a staff designer responsible for set design on a large number of Doctor Who stories, designing not just futuristic settings but also historical sets and diorama. Cusick worked on a large variety of television programmes for the BBC including comedy, variety, drama, single plays, and films.

As Cusick was a BBC employee at the time he designed the Daleks, he was on a salary and not paid royalties. Given the large revenue generated by merchandise featuring Cusick's Dalek design, some feel that he should have been paid a royalty (as was script writer Terry Nation, who created the concept of the Daleks but not their design or appearance). However, this was not in the terms of his contract. Despite this, the BBC did recognise his contribution with an ex-gratia payment. Cusick himself never asked for more money; just to be recognised as the designer.

In the late-1970s, he was a designer for the James Burke BBC programme Connections. He lived near Horsham, West Sussex. After retiring as an art director for the BBC he wrote - as a hobby - about battles from the Napoleonic era, and contributed to a number of specialist magazines and periodicals.

In July 2008 he appeared in an episode of the BBC Three documentary series Doctor Who Confidential, where he spoke of the original Dalek design and how the concept came to fruition. He also contributed commentaries and appeared in features for the BBC DVD range.

Cusick died of heart failure in his sleep after a short illness, leaving two daughters and seven grandchildren. He was 84 years old. 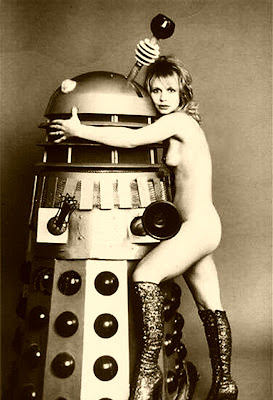 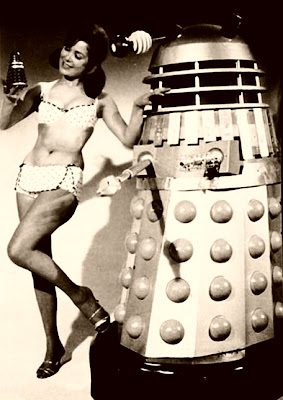 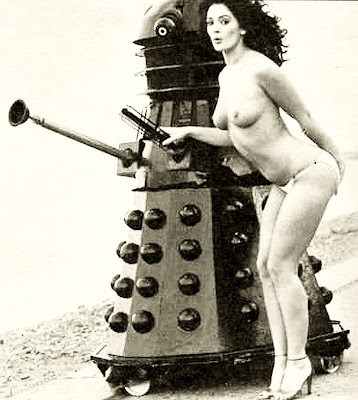 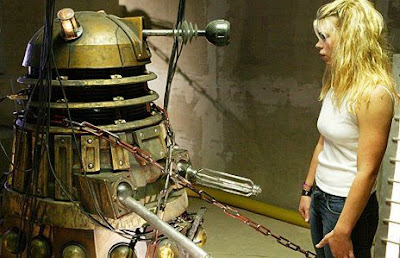 And some humor from Mr. Bean with the Daleks...