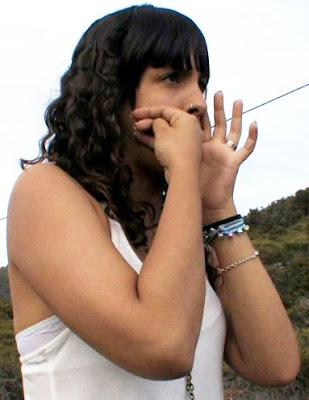 The night has not yet fallen in La Gomera, one of the smallest Canary Islands.

From the top of the hill I can see, scattered in the distance, a few old houses. To my right, a row of black trees is a stark reminder of the fires that struck this Spanish island off the coast of Morocco last summer.

I close my eyes to avoid being distracted by the landscape and make an effort to hear. I'm trying to discern, among the echo of the wind and the noise from the cars that from time to time drive along the road, the sounds of silbo gomero or Gomeran whistle, an ancient language the locals have assured me is still in use.

This method of communication, in which the Spanish language is replaced by two whistled vowels and four consonants, has a peculiarity perfectly suited to this landscape of deep valleys and steep ravines. It has the ability to travel up to two miles (3.2km), much further and with less effort than shouting.

There are no certainties about its origins. It is known that when the first European settlers arrived at La Gomera in the 15th Century, the inhabitants of the island - of North African origin - communicated with whistles.

These whistles reproduced the indigenous language. With the arrival of the Spanish, the locals adapted the whistling language to Spanish.

So the most likely theory is that the whistle came with the settlers from Africa, where there are records of other whistled languages.

Some locals recall its widespread use in the 1940s and 50s.

"In the old days, when the mountain caught fire, something that happens quite frequently in the island, the Guardia Civil came to pick us up," says Lino Rodriguez, an old whistler with a cracked smoking voice.

"And no matter what we were doing, they put us in a truck and drove us to put out the fire.

"So, to avoid them, we passed a message between us whistling: 'You have to hide, the Guardia Civil is coming!' And because they didn't whistle, they didn't understand what we were saying and couldn't find us."

The council and the mayors were paid to put out the fires but would not pay any locals who helped, he explains.

"The thing is that here, learning to whistle wasn't a matter of pleasure. It was an obligation, a necessity. If you didn't know how to do it, you would have to walk to give a message. And as the houses are far from each other, and there were no roads or phones, whistling was easier than walking," he says.

Whistling began to decline in the 1950s, when economic difficulties forced most of the whistlers to emigrate, mainly to neighbouring Tenerife and Venezuela. The growing road network and later, the development of the mobile phone, deprived silbo of its practical function.

By the 1970s and 80s, there were only a few whistlers remaining, but at the end of the 90s there was renewed interest in silbo, in part due to an initiative to make it a compulsory subject at primary school.

This came about, says Juan Carlos Hernandez Marrero, a researcher from the Archaeological Museum of La Gomera, despite it being largely "reviled" by the vast majority of inhabitants who viewed it as "something from peasants".

However, I must admit that after travelling for hours around this volcanic island whose landscape and climate changes at every corner, I still found no traces of silbo gomero.

That is because silbo is mostly heard in schools and in restaurants that provide whistling demonstrations for tourists.

For Fernando Mendez, minister of tourism of La Gomera, whistling is crucial to the island's tourism industry.

"Just as in the UK there is a branch of tourism linked to learning English, or India sells its yoga workshops, we can make silbo into something similar," says Mendez.

Archaeologist Hernandez Marrero agrees that preservation is important, because it defines the identity of the Gomerans. But he fears that it risks becoming a cliche, like the flower necklaces given to tourists in Hawaii.

"I think we need to talk to the people who are still alive and know a lot about silbo. It's necessary to reflect in depth on what do we want the silbo for. We know a lot from a linguistic perspective, but very little about its history," he says.

It is known, for example, that the Gomera whistle co-exists with other whistling languages in the world - on the Greek island of Evia, in the town of Kuskoy, eastern Turkey, and in a town of the French Pyrenees.

So for some silbo is a source of income, others understand it as a defining feature of their identity and for academics like Marcial Morera, a linguist at the University of La Laguna, it has another use.

"Silbo is interesting from the point of view of the theory of language because, since it is a very simple system, it can help us understand how languages in general are formed," he says.

There are fears that public spending cuts in Spain will affect the teaching of silbo at schools, one of the few places nowadays where children learn to whistle.

And the recognition and prestige that the whistle has gained in recent decades has had unforeseen consequences.

Many whistlers now compete for the attention of tourists, and some have even fallen out with each other and are no longer on speaking terms.

But it is also true that there are many whistlers in the island willing to share their stories with anyone who wants to listen.

I found one of them in the town of Chipude, one of the highest areas of the island.

At 39 years old, Isidro is one of the few young people who learned silbo gomero directly from his parent. Cyro, as his friends call him, can be seen whistling in the mountain, calling his goats.

"They recognise my whistle, as they recognise my voice," he says proudly. He is the only one from his family who remained in La Gomera, the rest having left to seek work in Tenerife.

"After being there for eight years, I decided to come back. I never got used to life there. I like being in nature, I like my animals and my whistle. And here I'll stay, because the island needs me."