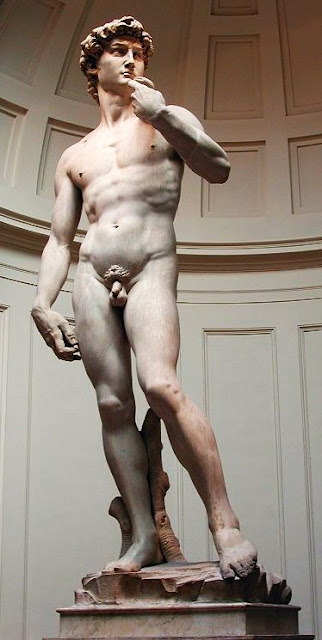 The Japanese want to put pants on David. A replica of Michelangelo’s famous statue was installed without much warning last summer in Okuizumo, Japan. But the famously nude biblical hero is raising eyebrows – and reportedly scaring children — in this town of 15,000 in southeast Shimane prefecture.

The 16-foot-tall statue — which stands alongside a similarly exposed Venus de Milo — was donated by a local businessman and stands tall in an Okuizumo park that also features a running track, baseball stadium and children’s playground, the AFP reports. According to local officials, some residents have asked officials to put underwear on David in order to “preserve his modesty.”

“They are statues of unclothed humans, and such pieces of art work are very rare in our area. Some people apparently said the statues might not be good for their children,” town official Yoji Morinaga told the AFP.

Despite the reputation of some Japanese for — shall we say — esoteric  sexual predilictions, full frontal nudity is illegal in photos or on film.

Morinaga says he hopes that the town’s residents will learn to appreciate the sculptures and believes that they’ll be valuable in education. But the figures’ nudity remains an issue — as it has been for other viewers through the years. When a replica of the statue was donated to Queen Victoria in 1857, she was reportedly so shocked that a modesty-preserving fig leaf was specifically commissioned just to appease Her Majesty. It’s no longer a part of the statue, which is on display at London’s Victoria & Albert Museum, but instead is housed in a special case just behind the work of art.
Posted by Mercury at 9:36 AM